Fincher pulls it off. Grade: A 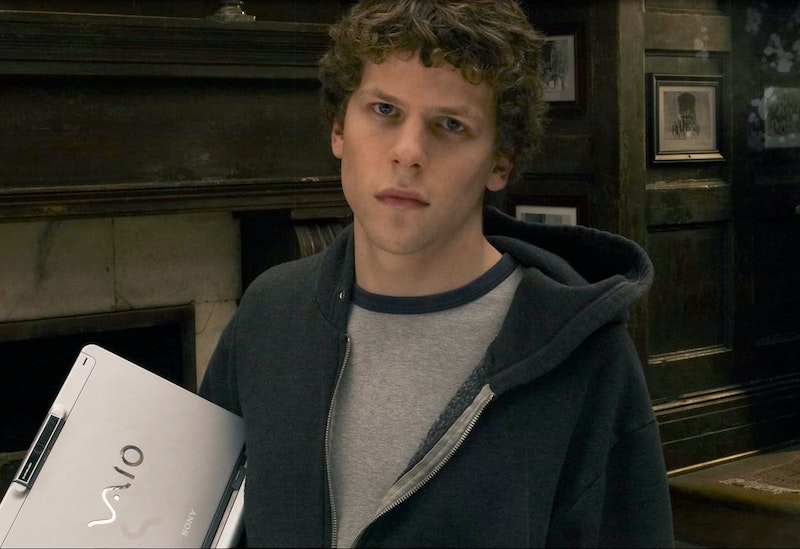 I left The Social Network typing a quick review into a Facebook app, which soon after my Blackberry requested I update. As my phone installed and rebooted, a friend called me about an event I’d posted to the site; apparently we had too many RSVPs. While preparing to type this, my phone bleeped as friends posted comments on my two-sentence review. From the theater to my phone and computer, Facebook ruled my screen.

The Social Network is nothing if not timely, in the end a blessing and a curse. A blessing because the blogs are buzzing, a curse because expectations are high. Spoofs of its earnest trailer abound. Facebook’s valuation continues to rise despite controversies over its policies, and millions of people use and talk about it. A marketer couldn’t dream of a better time to release this film.

For these reasons, I expected to hate The Social Network, marketed as an epic—okay, melodramatic—parable of the new media decade. I’ve been won over. The Social Network is poised to be this generation’s response to Wall Street, a timely, preachy zeitgeist story of excess and intrigue, built around a delicious antihero.

The movie is far from a tale about a website. Director David Fincher limits shots of computer screens to a bare, comic minimum. The Social Network is a standard story about greed, sex and all that good stuff, but refreshingly told without any heroes or saviors. Arriving after the euphoria of the social networked aughties, it takes advantage of its license to be cynically, almost literally, dark.

Facebook’s status is far from its ad-free, user-generated days of valiantly connecting people. Everyone knows the company is worth billions. Its elitist beginnings—and its implications—have been excavated, and its privacy policies thoroughly criticized as similarly elitist and greedy. The movie gracefully speaks to all those issues.

Nobody makes it out of The Social Network unscathed. Mark Zuckerberg, played by a brilliantly cast Jesse Eisenberg, emerges as a wonderful villain. Self-involved, snotty and petty, he is not someone you want to be friends with, even as you understand and feel sorry for the upwardly mobile computer geek. Justin Timberlake gives Sean “Napster” Parker a grating charisma, almost endearing if billions weren’t at stake. Spiderman’s Andrew Garfield’s Eduardo Saverin comes out best as the wronged business partner—a necessary role in every success story—but is as driven by money and pride as anyone else, and doesn’t get any points for his foolhardy pursuit of early advertising on Facebook. The Winklevoss twins (eye-candy Armie Hammer), who also take credit for Facebook, provide comic relief as spoiled rich boys who get what they deserve.

A major argument in the film is how empires are built as much on relationships as by markets: who’s friends with whom, who’s not answering emails, who didn’t come to the party, who isn’t a team player, who do we like, who do we dislike, who’s fun, who’s connected. These are meaningful questions, often neglected by people who criticize the powerful because they are so petty. But their pettiness is the point: powerful people can be weak.

The social commentary is simplistic, so exaggerated it could be brilliant. At its most liberal, the film is about a bunch of Harvard white guys with varying degrees of privilege who are as status-hungry as the worst of us and who treat women like objects and who revel in their small clubs and technical prowess. The Social Network’s diatribe borders on intense; it’s a bit uncomfortable, but maybe we’re supposed to be.

It hits all the right themes, but it also works as a film. It delivers plenty of snappy, indulgent and overly intellectual dialogue from Aaron Sorkin, enough to make West Wing fans fire up their DVDs and forget about Studio 60 (which I loved anyway). Fincher keeps it moody and glossy, about as far from Facebook’s bright, friendly aesthetic as possible. Still, it leaves plenty of room for unexpected wit, most of it uttered with Eisenberg’s dry, hyper-articulate tongue. The acting is top-notch. Eisenberg glowers through the whole film but with varying innocence and menace. Garfield is disarming but slightly inelegant, like a frat boy should be. Timberlake’s cool, often distracting demeanor works well with his character.

Is any of it true? It doesn’t matter. Like a Facebook profile, it’s a story—a construction—an entertaining parable of success in a cutthroat, winner-take-all digital economy.