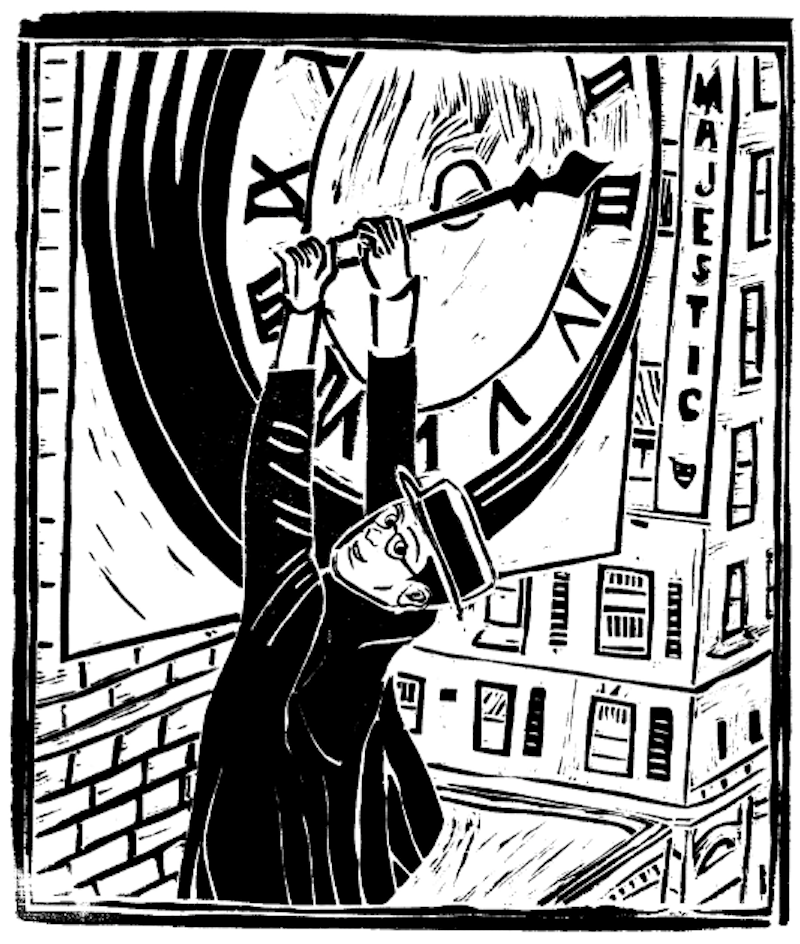 This year marks the 90th anniversary of the silent film masterpiece Safety Last. The film offers arguably the most iconic image from the silent film era: Harold Lloyd clinging from a building clock over downtown Los Angeles.

Known as the "Third Genius" (behind Chaplin & Keaton), Lloyd perfected the prototypical "everyman" character. In Safety Last, Lloyd is a small-town country boy striving for success in the big city. He finds a job as a department store clerk and comes up with the idea to climb the building edifice as a publicity stunt. Lloyd was inspired a year earlier when seeing a stuntman climb a towering building in downtown Los Angeles.

During production, a fake building structure was constructed over another building's rooftop. The camera was positioned across the street at an angle to make it look as if Lloyd were hundreds of feet in the air. In truth, the building was only seven stories high.

When Lloyd first tested the safety precautions for the stunt, he dropped a dummy onto a mattress positioned below the clock. The dummy bounced off the mattress and plummeted to the street below. Writer and producer Hal Roach urged Lloyd to use a stuntman, to no avail.

What made the Clock Stunt more amazing was the fact that Lloyd had only eight fingers. He'd lost a thumb and a forefinger on the short film Haunted Spooks four years earlier when a prop bomb exploded in his hand. He subsequently wore a light glove with prosthetic fingers giving him only one complete hand to perform.

Lloyd married his on-screen co-star Mildred Davis in 1923. A year later he started his own production company at a location that now houses the Los Angeles Mormon Temple in Westwood. Like Buster Keaton, Lloyd's popularity waned with the advent of talkies.

In 1947, Lloyd tried to recreate the "thrill comedy" magic in The Sin Of Harold Diddleback. Directed by Preston Sturges and produced by Howard Hughes, the film includes a scene where Lloyd is stranded on a building ledge with a full-grown lion. The film received negative reviews and did poorly at the box office. This was Lloyd's last film.

After retiring, Lloyd became known for his nude photos of models and strippers. His subjects included Bettie Page and Marilyn Monroe.