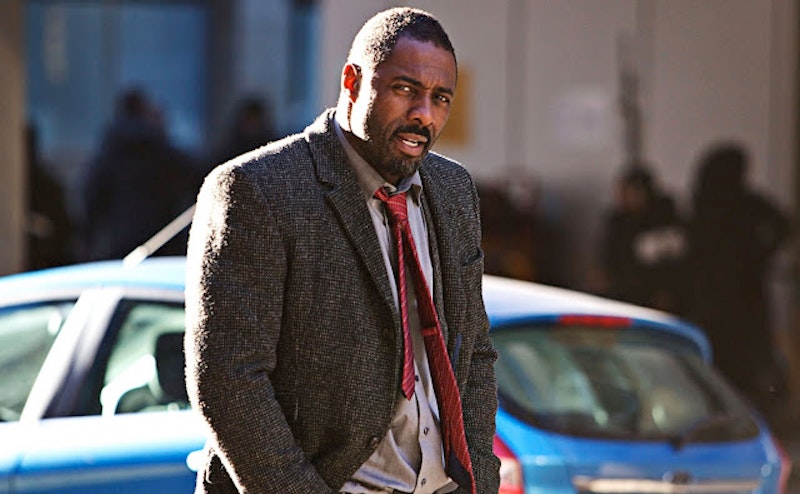 It was confirmed a few days ago that Sam Mendes will be back to direct Bond 24, the 24th film in the James Bond franchise. Daniel Craig is contractually obligated for at least two more Bond films and with last year's Skyfall earning more than 1.1 billion worldwide (the highest grossing British film of all time, according to producers Michael G. Wilson and Barbara Broccoli) don't expect the franchise to end anytime soon. Rumors already abound about who will replace Craig in a few years, and there's been at least one surprise name bandied about over the past few months: Idris Elba.

Elba is no doubt best known to American audiences as Stringer Bell from The Wire, but it's his current role as Detective Chief Inspector John Luther in the BBC's hit cop drama Luther that's won him wide acclaim (including a Golden Globe for Best Actor). Watching the show, currently in its third season, it's not hard to understand why Elba would be considered as a possible Bond. There's a remarkable charm to the man. In fact, he's such a joy to watch on screen that it's easy to overlook the show's often ridiculous failings.

Luther is basically a bloodier version of Law and Order: Criminal Intent: a stew of whodunit clichés, pop psychology and what The Telegraph's Serena Davies recently called "murder porn." DCI Luther is the stereotypical compromised cop hero that we've come to expect from TV dramas like this (thanks to NYPD Blue, The Shield and 50 other shows I could rattle off). He's smarter than everyone else, and way more fucked up too. He'll break any law if it serves his own end, which of course in real life would have gotten him fired about 10 seasons before the show even started, but no one turns on the TV to watch real life (otherwise half of every episode would revolve around a stack of paperwork).

Already this season Luther has tracked down London's latest serial killer, struck up a romance with an attractive blonde and foiled an internal affairs investigation determined to bring him down. It's all artfully done, but since the first season the show hasn't really bothered with plots or story arcs so much as situations to put Elba in and let the audience revel in his performance. Of course, with a mere four episodes a season, Luther doesn't have to work too hard to be damn entertaining.