Is it less depressing when stupid movies embrace their stupidity? 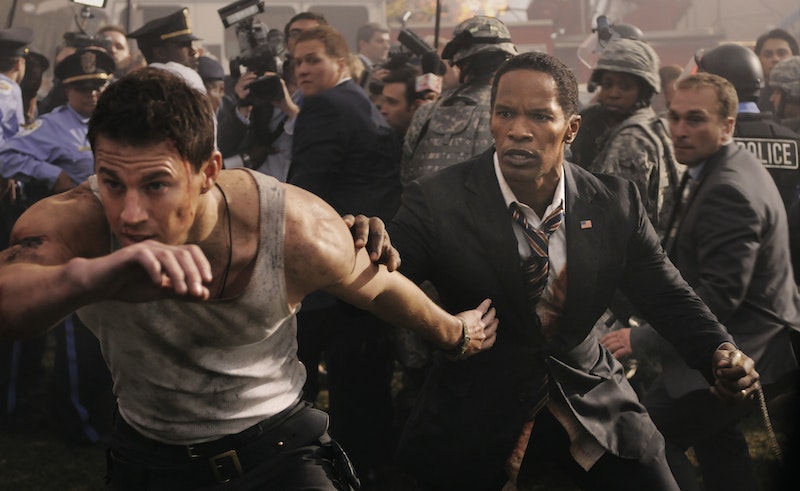 In 2003, the first teaser trailer for Roland Emmerich’s The Day After Tomorrow scared the shit out of me. Only two years after 9/11, the idea of a global catastrophe, whether global warming, a nuclear attack, mass poisoning, or entire cities decimated—it wasn’t that far from reality. The Day After Tomorrow was considered goofy, scientifically inaccurate, and maudlin as soon as it came out. That first trailer imitated the constant buzz of disaster reporting, with astonished reporters sounding genuinely frightened saying things like, “This is just MASSIVE!” when a tornado destroys the Capitol Records building in Los Angeles. Even more striking and grim were the images of Manhattan getting hit with a 20-foot high storm surge and freezing over in a day. So soon after 9/11, the reality of being uprooted was real and the thought of the world being destroyed overpowered the absurdity of the science—this was something that almost happened and could happen again at any time.

Despite its goofiness, The Day After Tomorrow takes itself pretty seriously for a “big dumb action movie.” Compared to Emmerich’s latest, White House Down, it’s practically his Fahrenheit 9/11. Even though we live in unstable and psychically rattled times which get more and more disturbing with each passing year, the movies lose what little politics they might have had, and become increasingly escapist and lazy in their execution. Olympus Has Fallen was one of the worst widely released major films I’ve ever seen. Every aspect of it was tossed off, it was two and a half hours of nonsensical and boring horseshit. White House Down, despite sharing Olympus’ premise, doesn’t feel self-serious and baggy. Everyone is in good spirits: we’re making a silly film. The President (Jamie Foxx) doesn’t think twice about following the dashing Channing Tatum, who isn’t a Secret Service agent but has a gun and makes quips, through a burning White House after James Woods stages a coup from inside his security detail because his son died in Iraq.

Everyone from the fey tight-leather jacket and lollipop sucking hacker, to the bumbling and awkward tour guide who is belittled by the rebels only to show what a badass he is in the end, to the stubborn adolescent girl who goes from resenting her father to adoring him through adversity, are straight out of an Easy Bake oven. But the silliness and lack of logic are embraced and played to, like when Woods’ wife is brought in to talk her husband down, only to tell him “Whatever it takes to avenge our boy” in a Room-esque moment of completely laughable insanity. At the film’s end, someone declares that France and the rest of the EU have agreed to “the treaty,” ushering in world peace. I think it’s definitely less depressing to see an expensive, trashy movie like this that knows how worthless and silly it is, than a self-serious movie that thinks it’s smarter or more important than it is.