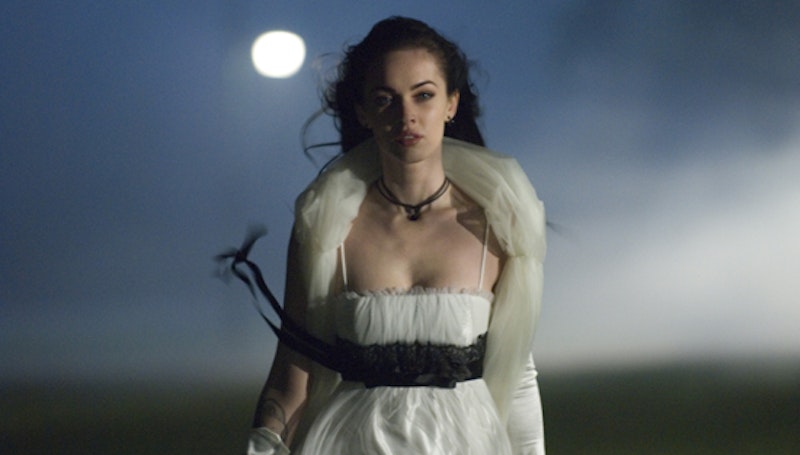 Our culture remains addicted to celebrity-related outrage, yet we're strangely unwilling to hold our popular artists to any kind of equivalent aesthetic expectations. America's anti-Kanye ire grew to such a degree that the president is now on record talking about the guy; meanwhile, a film like Jennifer's Body, in theaters today, is equally indecorous and sloppily self-serving, yet I can't imagine anyone will get upset by it. Kanye insulted his fans by interrupting an awards show that barely anyone still watches, but I doubt any Juno fans will make YouTube videos lambasting Diablo Cody for writing this new piece of exploitative trash.

There's almost nothing creative or particularly well done about Jennifer's Body, which some might defend on the grounds that, well, it's about a flesh-eating cheerleader. At a cultural moment when even the most highbrow, serious artists are expected to hold some minimal reverence for lowbrow art, we've perhaps begun to value that reverence too much for its own sake. It's one thing for Michael Chabon, or Jonathan Lethem, or Quentin Tarantino to revel in their genre allegiances, just as it's good that their boosterism has led to overdue mainstream appreciations for, say, Philip K. Dick and Hong Kong action cinema. But Diablo Cody—a bumbling, awkward writer whose unremittingly false impersonation of high school emotion in Juno garnered her an Oscar—has now decided to make her schlock-ward move with this Carrie-pilfering monster movie, but she shows no understanding of how good pulp works. Her attempt to shoehorn a pseudo-feminist subtext into horror conventions is as awkward as her obvious desire to latch on to current vampire/zombie trends. Is this moviegoers' penance for the wickedly enjoyable Drag Me To Hell?

A surprisingly good (which is to say visibly alive) Megan Fox stars as the title character, the lifelong super-babe BFF of Needy (Amanda Seyfried) who gets put under a satanic spell by a conniving indie rock band from "the city" called Low Shoulder. If this all sounds too contrived to tolerate, wait until you hear Cody's high-schoolers use real-kid words like "freaktarded." Once the demon takes hold, Jennifer starts feasting on her male classmates, and, like, really starts freaking out Needy, whose name tells you all you need to know about her character. It's only a matter of derivative time before Jennifer sets her demonic sights on Needy's wholesomely named boyfriend, Chip.

The rash of student deaths, we're told in Needy's voiceover, gives the national media a "tragedy boner." This is indicative of Cody's desperately quirky writing, which also informs her decision to needlessly give one teacher character (the great J.K. Simmons, who should know better) a claw for a hand. The campy horror-comedy can be a glorious thing to behold, but Cody and director Karyn Kusama have no grip whatsoever on their film's tone. One minute we're watching a would-be allegory about high school social life, which never gets as poignant or funny as Mean Girls. The next we're watching a small-town story of paranormal possession, which is never much better than a Stephen King-based TV miniseries, and certainly no scarier. And just to make sure that any semblance of social insight is made murky, the film also periodically stops to give us a few minutes of extremely soft-core T&A, from Jennifer's plot-free skinny dip to her juicy lesbian kiss with Needy.

Jennifer's Body is crap, and not even the fun, self-aware kind. It's just a mess of pandering indie rock and vampire trends, without any real current of humor or genuine scares. It's perfectly reasonable to say that a script this uneven wouldn't be considered for production, let alone as a vehicle for one of the most visible actresses in Hollywood, had it been written by an unknown writer. So let's just acknowledge that this movie only exists because Cody's now a celebrity. That's fine, and it's the way that a lot of moviemaking decisions get made. But it'd be nice if audiences felt as shocked and offended by celebrities' bad art as they do about celebrities' bad behavior. Isn't it a worse sin to make a lazy, gratuitous movie than to speak out of line?