Bill Plympton's proudly juvenile Guns on the Clackamas gets a DVD release 14 years after its debut. (Grade: B+) 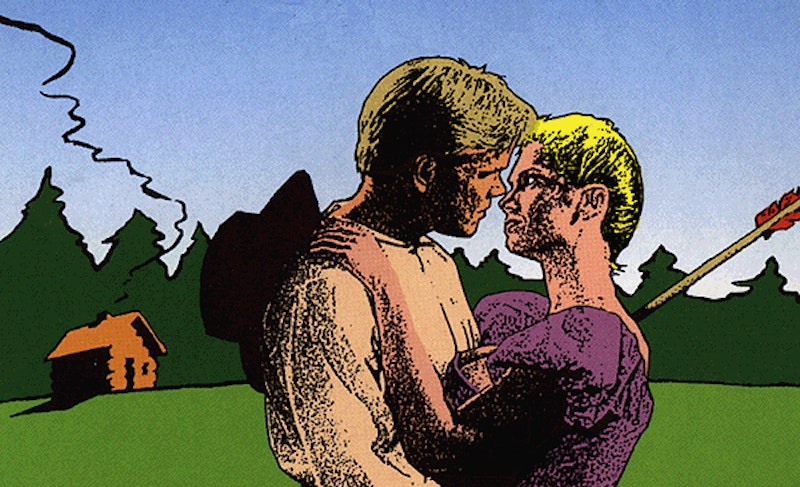 Best known as a short-film animator, Portland-based artist Bill Plympton has also directed two feature-length live-action films. I haven't seen J. Lyle (1994), his first, though I plan to track it down after delighting in Plympton's anarchic mockumentary follow-up, Guns on the Clackamas, released on DVD this month by Microcinema International.

Taking very rough inspiration from the death of Jean Harlow on the set of Saratoga, Plympton's film is ostensibly the work of British documentarian Nigel Nado (Keith Scales), who tries to interview his hero, reclusive director Holton Jeffers (Ed Townley) as the latter films his newest western. Jeffers is a supreme hack whose past credits include the creatively-titled Dracula Cowboys, Western Cowboys, and Sierra Cowboy. (In a perfectly deadpan cameo, Gus Van Sant explains how his movies Drugstore Cowboy and Even Cowgirls Get the Blues reveal Jeffers' influence on his work.)

The Clackamas production, as documented by Nado, is so desperately doomed that it makes Spinal Tap look austere. By switching mediums from cartoons to live-action, Plympton necessarily jettisons the shaky, warmly-colored visual sense of his most popular work, but he retains his animators' sense of lunacy. Key cast members die, a series of financial backers jump ship, the initial leading actress has an outrageous stutter whenever the camera rolls, a crew member's lust for a different actress turns fatal. And it almost goes without saying that everyone involved in this film's creation-from the reclusive Jeffers to the former avant garde filmmaker directing Clackamas to the shyster businessman trying to wrangle financing for it-is a complete boob. Plympton's film is a farce, not a satire, more Mel Brooks than The Player.

It also doesn't land all its punches. Since there's not a serious frame in all of Guns on the Clackamas, one periodically feels a little beleaguered by the barrage of funny business. We can often see a lot of the sight gags coming, like a recurring sequence with Carl "Safety First" Huggins, a put-upon crew member whose demonstrations of on-set protocol grow increasingly violent. But for a movie that averages about a joke every 45 seconds, Clackamas is genuinely funny with incredible frequency. This is partly thanks to spot-on performances by almost everyone, and perfect editing by Holly Faison and Merril Stern. Their masterful cuts between interviews, building comic spaces and drawing out jokes, adds a little much-needed artistic credibility to a movie that often feels like a barely-serious joke between friends.

That homespun charm is one the film's strengths, however, whether it's the occasional actor who can barely keep a straight face or the unrelenting humor-for-its-own-sake tone. Plympton's parodies, whether of high-art pretension or genre hackwork, never aim to wound, precisely because everyone involved seems to know that they're making their own b-movie. Clackamas is utterly unserious, even inconsequential, never rising to the celebratory-schlocky heights of Ed Wood or Joe Dante's Matinee. But it deserves a bigger cult, and the fans of those films who seek out this DVD won't be disappointed.

Guns on the Clackamas, directed by Bill Plympton, is available from Microcinema International DVD, who have also recently put out Bill Plympton's Dog Days: A Collection of Short Films 2004-2008.