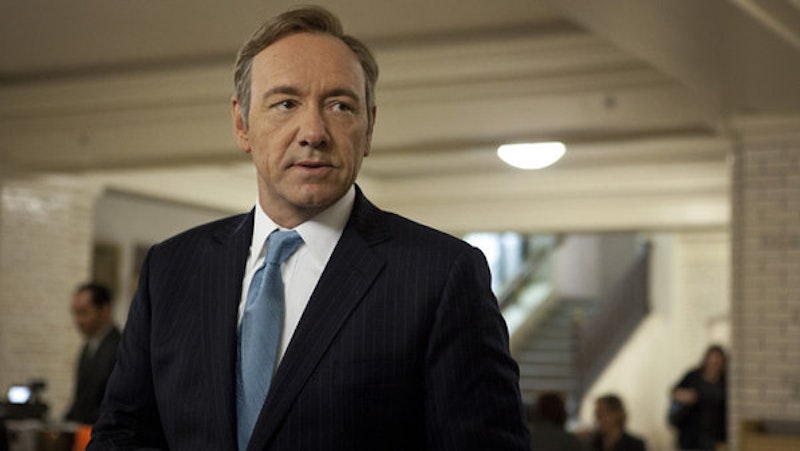 On Thursday we got our first look at the highly-anticipated Netflix original series, House of Cards, an Americanized remake of the 90s British miniseries about a corrupt Conservative politician who has his sights set on the highest office. Here, Kevin Spacey plays Majority Whip Francis Underwood, a man who vows to take down anyone in his way after the newly-inaugurated President reneges on his promise to make Underwood his Secretary of State. If the original British miniseries was a comment on ruthless politics during the Thatcher/Major years, this new HoC looks to capitalize on Americans’ hatred for politics and politicians generally. You can check out the two-and-a-half-minute trailer below, wherein director (and executive producer) David Fincher makes it clear that he is definitely not Aaron Sorkin.

HoC represents Netflix's first serious foray into original programming, and with a two-season commitment and a total cost already exceeding $100 million, it's safe to say that failure here would be disastrous for the company. It would also, I think, be disastrous for TV generally, since high-profile projects like this (i.e. projects that attract Hollywood stars like Fincher and Spacey) can only fail so many times before actors, directors and producers start thinking the TV revolution isn't all it's cracked up to be (I think we all lost something when HBO was forced to cancel Luck earlier this year).

Netflix reportedly outbid both HBO and AMC for the rights to the show, and in addition to the two-season contract—unusual for any new project—the company made the historic announcement that they'll be making the entire first season available for streaming all at once. As HoC showrunner Beau Willimon told The Hollywood Reporter, "This is the future, streaming is the future… TV will not be TV in five years from now [sic]… everyone will be streaming." Five years is no doubt too optimistic, but I applaud Netflix for taking such a bold step. My friends and I have been complaining for years about archaic week-to-week program scheduling, and I can remember one conversation early in Game of Thrones' second season about how we'd gladly pay more than the cost of an HBO subscription to watch the entire season all at once. Incidentally, Game of Thrones topped the list of most pirated shows of 2012, putting it high on the list of most pirated shows of all time; it's season two finale boasted 4.2 million viewers, only slightly more than the 3.9 million viewers who downloaded the finale off BitTorrent.

Those stats speak for themselves: networks are losing untold millions by not offering better viewing options, and the recent debacle over HBO Go is a prime example. When HBO launched its online streaming service many complained about the company's decision to offer Go only to HBO subscribers (meaning that if you wanted HBO Go you also needed a cable subscription). Gabriel Rossman at The Atlantic summed things up pretty well: "HBO claims that (a) people aren't interested in a la carte HBO Go and (b) the transaction costs are too high to do their own billing, etc. The technical term for these explanations is 'bullshit.'" Rossman then outlined the reasons that big media conglomerates like Time Warner make billions off cable subscriptions, and specifically off the kind of old-school channel surfing that cable was made for, so I suggest you check out her article if you want to know why we shouldn't expect Big Entertainment to innovate any time soon. Still, with thousands of active illegal streaming and downloading sites, the writing is on the wall, and I imagine Willimon will be vindicated sooner rather than later.