The Golden Army will make pop culture academics swoon until they realize there’s not much going on behind Guillermo del Toro’s green screen. 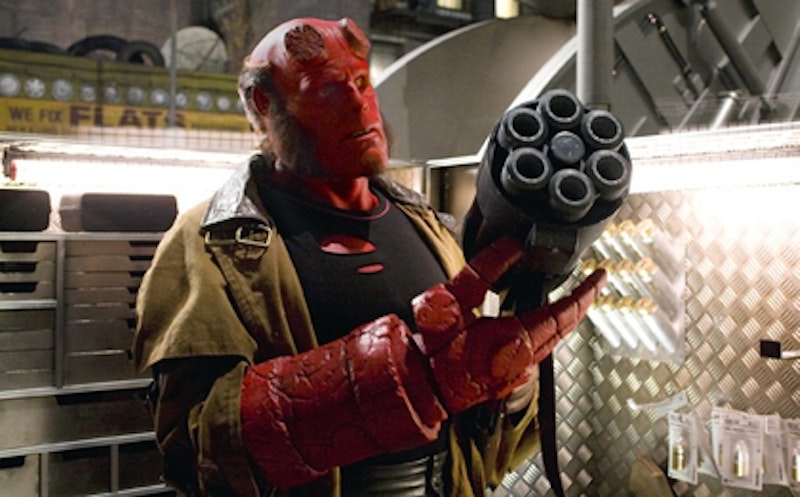 Guillermo del Toro’s Hellboy II: The Golden Army is, almost literally, a dozen films in one. At the very least, it’s a mishmash of genres and mythologies so dizzyingly dense, so essentially of this cultural moment, that it’s easy to forget how conventional a shoot-‘em-up, blow-‘em-up summer blockbuster (and sequel) it really is. My mind raced during Hellboy II (and during the first film, released in 2004), busily parsing del Toro and Hellboy creator Mike Mignola’s collage of references, but when the movie ended it was simply over. Hellboy’s swarming aesthetic stew isn’t in service of any bigger ideas, it just exists to exist. But how ‘bout them monsters?

Summoned into Earthly existence by the Nazis in 1944, the half-man/half-devil creature nicknamed Hellboy was subsequently rescued and raised by British professor Trevor Bruttenholm (played in both movies by the great John Hurt). Later employed by the federal Bureau for Paranormal Research and Defense, Hellboy (Ron Perlman, under full-body makeup), who ages at about one-seventh as fast as a human, now helps battle a series of supernatural villains drawn from various world mythologies; his fellow B.P.R.D. employee, a fish-man named Abe Sapien, brings a shelf-length collection of old encyclopedias on every mission to discern the beings’ origins. There are tremendous metaphorical implications in all this: humans require the help of a half-Satanic being to combat villains drawn from their own invented mythologies, and said creature is owned by the government. Hellboy, just in its framing conceit, therefore draws on science fiction (the Nazis used a dimensional portal to get him), fantasy (the mythological villains are straight from Tolkien, and del Toro’s set to direct the film adaption of The Hobbit), government conspiracy, Christian iconography, and gangster/gunslinger imagery—Hellboy has a huge stone fist nicknamed the “right hand of doom” but he talks like a Brooklyn teamster and prefers to use a huge revolver, all while habitually smoking stogies.

To this genre gumbo, Mignola and del Toro add aesthetic elements of gothic horror (a residual effect of del Toro’s experience directing Blade II?), American monster movies (there are two onscreen nods to the classic MGM creature features), broad buddy comedy, action violence, B-movie irony, romantic comedy (Hellboy has relationship troubles with his girlfriend Liz Sherman, a woman who can burst into flames when angered), and of course, comic books. The movies bear no visual resemblance to Mignola’s heavily shaded original comics (he was later a contributor to the similarly illustrated Batman: The Animated Series in the early 90s), but they feel like a Jack Kirby-inspired explosive cartoon. There are further references in The Golden Army to Milton’s Paradise Lost, as well as a hinted-at but never fully explored environmentalist concern.

Del Toro, who’s been making horror films for years and only recently ascended—or descended, depending on your allegiance to the proudly low arts—to Oscar respectability with Pan’s Labyrinth in 2006, certainly has an active imagination and a better sense for special effects than most contemporary directors. He packs his screen, particularly during a visit to a troll market under New York, with an assortment of monsters and species that bests even George Lucas’s Tatooine cantina set piece, and even the most obviously CGI’d creatures blend in seamlessly because the entire Hellboy world is shot with the same glossy darkness as Pan’s Labyrinth. The mixture of puppets, costumes, makeup, and CGI is a worthy visual counterpart to the conglomeration of genres that makes the Hellboy movies so fun.

I like del Toro’s Hellboy entertainments primarily because they are so proudly, defiantly nerdy. The first movie’s box office success must have been the result of our cultural lust for explosions, but I can imagine a lot of audience members felt confused by the panoply of genres and the sudden shifts in tone. Del Toro is a nerd’s nerd, a director, like Tim Burton, for whom a stylized opening credit reel is to be done with maximum B-movie relish. Hellboy is right up his alley, more so than the crooked faux-tragedy of Pan’s Labyrinth, because it is honest about the role of pop culture and fantasy in a person’s life. His Oscar-winner trafficked in flat characters and atrocity, subjecting a child to unspeakable violence for the sake of a self-important “point” about the power of imagination in times of emotional strife. It was also shot in the currently ubiquitous Spanish brand of visual oversaturation (see: Sex and Lucia or Almodóvar’s Talk to Her) where every sound leaps from the speakers and the camera can’t stand still.

The first Hellboy made good on its nerdiness and tried to have a little fun. The Golden Army mainly follows suit, but it succumbs to all the standard trappings of blockbuster sequel-dom by merely ratcheting up the volume and tone of the original. Thankfully, this means even more genres are added to the mix (the main nemesis here is a gothic elfin renegade who aims to punish humanity for its mistreatment of the earth), but it also means more supposedly “crowd pleasing” elements: explosions, CGI set pieces, broader comedy, and on and on. When Hellboy and Abe get drunk and weepily sing Neil Diamond, the comedy net is cast wider than any part of the first movie and it feels cheap. A recurring theme of the Hellboy story is the protagonist’s struggle between his supernatural identity and his allegiance to humankind; it’s a shame that del Toro couldn’t have followed his own implicit advice and allowed his movie’s inner freak room to breathe little more comfortably.

That’s an unfair expectation, though. The Hellboy franchise—you can bet #3 is coming after The Hobbit wraps—is as much a typical 21st-century genre mashup as any Girl Talk track or The Grey Album, but it’s intellectual smoke and mirrors for any critic in search of something meaningful. The Golden Army is a sequel in the most disappointing ways; a number of the first’s central actors didn’t even return, and another, the wonderful Jeffrey Tambor, is overshadowed by a German robot who wears a 19th-century deep-sea diving suit and whose voice is supplied by Family Guy creator Seth MacFarlane. Hellboy II is a good enough time at the movies, but it never quite follows through on its promise to be a truly unique Hollywood product. Instead, del Toro and Mignola fall prey to the YouTube era’s greatest fallacy: believing that pop references, particularly campy ones, are inherently meaningful. They gather a lot of pop culture signifiers together and then mask their own cleverness in an attempt to entertain the lowest common denominator. That’s a pretty grim example from two guys who have been heralded for their imaginative powers.