Chopped Is No Bullshit

Iron Chef America is for poseurs. 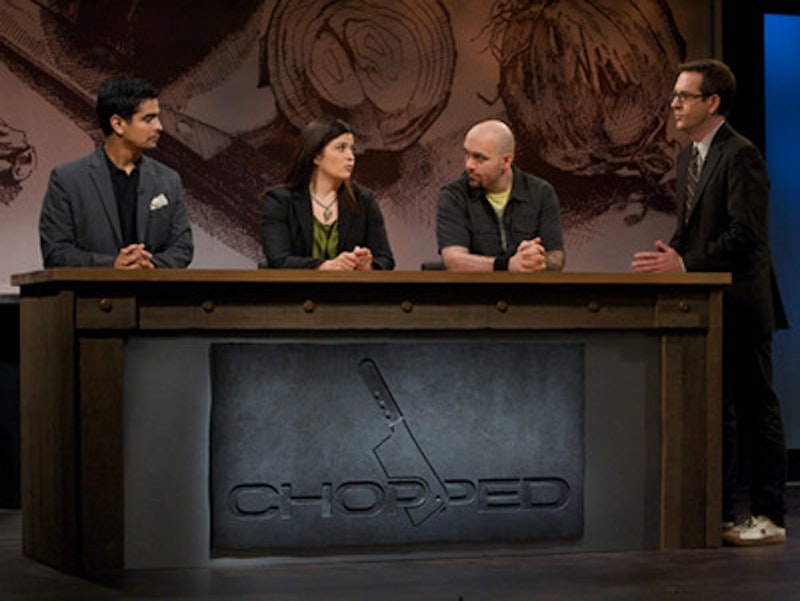 It’s possible that culinary gladiators have been injured while doing battle in Iron Chef America’s vaunted Kitchen Stadium, that forefingers have been nicked or severed, arteries opened wide, main courses splashed with blood or Robert Rodriguez-esque viscera, plastic surgical gloves swiftly slipped on. Maybe that kind of thing happens on the show all the time, only to be edited out in post-production, but my guess is that these sorts of mishaps never occur. Why? Because Iron Chef America is kind of a haute cuisine version of the WWE: there’s a lot of stagecraft and ceremony and posing, and that stagecraft and ceremony and posing is the point of the whole enterprise. The Iron Chefs and the contenders and their myriad assistants know well in advance what the “secret ingredient” is, and have time to sort out how they’re going to translate that ingredient into multiple restaurant-style courses prior to strutting their stuff on camera. The ultimate end result—whether the Iron Chef or the contender triumphs after an hour of “pitched battle”—is the program’s only unscripted, unforeseen element.

You know and I know and even Mario Batali knows that this is straight-up bullshit, which is why you should already be watching Chopped if you aren’t already; it’s the Ultimate Fighting Championship of reality-television cooking scraps. On Chopped, chefs actually sweat. They swear audibly. They cut themselves, undercut their competitors, fuck up spectacularly—overcooking or undercooking meats, misjudging flavor combinations, over thinking in terms of strategy—freak out, burn stuff, dissemble desperately before unbending judges like truant schoolchildren in the principal’s office, bare alpha-dog fangs at one another. There are terse, contentious exchanges, and tears, and rampant unsportsmanlike conduct; after all, $10,000, personal pride and considerable bragging rights are at stake. Chopped is as about as dramatic as Food Network gets these days, and it’s awesome.

At the outset of each hour-long episode, we’re introduced to four competitors—they’re usually chefs, restaurant owners, lapsed culinary wizards—who will face off in side-by-side, high school locker-style kitchen stations with a single adjoining pantry. This is close-quarters combat, a far cry from the sprawling, cavernous environs of Kitchen Stadium; in most cases, one must squeeze or “excuse me” past ones rivals to feed ingredients into an ice cream machine (a too-common gambit that’s intended to telegraph ambition) or grab an orange or saffron or collard greens. And while Iron Chef America contestants have an hour and a team of assistants to prepare a host of dishes, Chopped’s solo (sometimes hapless) pugilists have 20 minutes to prepare an appetizer, 30 minutes to prepare a main entrée, and 30 minutes to fix dessert. All of which sounds reasonable, except that each of these meals must incorporate four disparate ingredients that are revealed seconds before each round starts, and following each round, someone is sent packing. When an especially incongruous pile of ingredients is assembled—for example, on a recent episode, chefs were asked to transform flank steak, chicory, pepino melon, and granola bars into a table-ready main course—the experts are separated from the novices pretty quickly. It can be as humbling to watch masters of their respective domains fall to pieces as they attempt to cobble together a coherent approach—flailing around, shocking veggies, throwing fillets or octopus tentacles into hissing pans, dumping random ingredients into blenders—as it is stunning to realize that chefs are as egotistical and self-assured as cocksure jack-wagons in every other profession.

When a course round has ended and the chefs present their dishes at the judges’ table—erstwhile Queer Eye For The Straight Guy food expert/Chopped host Ted Allen stiffly reminds everyone, again and again, that the judges’ table is called “the chopping block”—the reaction shots are a wonder; there are few or no poker faces, just shark-like grins in the wake of a competitor’s culinary stumble or pratfall, skyward expressions of relief when one survives “to cook another round,” looks of dismay when someone else is paid an effusive compliment. No matter what’s going on at any point on Chopped, from Allen’s awkward sub-Alton-Brown-in-Kitchen Stadium play-by-play to the judges’ granular below-the-belt potshots to the palpable tension shift in the kitchen as a round ticks down to its final seconds and everyone scrambles to finish plating dishes just so, it’s all but impossible to turn away.