Nope is another visually astonishing and oddball film from Jordan Peele. 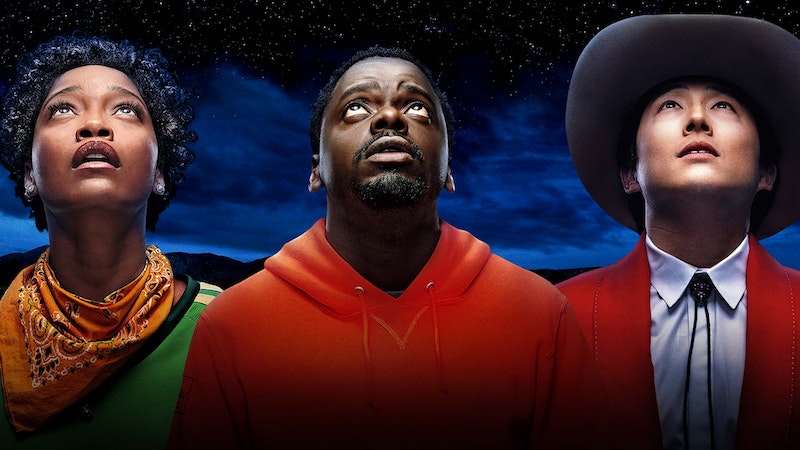 With Nope, Jordan Peele’s made his third film in a row that combines brilliant visuals with attention to detail, along with a half-dozen out-of-left-field ideas of things to put in a horror movie.

In the film, which is part horror and part sci-fi, Get Out star Daniel Kaluuya and Keke Palmer star as a brother and sister. The two own a ranch and run a struggling business lending out their horses to Hollywood productions, one that dates back to their distant ancestor, who was the Black man on a horse in "The Horse in Motion" from the 19th century. They get by occasionally selling horses to Ricky (Steven Yeun), a former child actor who now runs a Western theme park resort.

Once strange things start to happen, the siblings team up with an electronics store employee (Brandon Perea) and a veteran cinematographer (a scene-stealing Michael Wincott), to keep themselves alive and maybe gain some fame and financial security. Also popping up in small roles are Keith David, Eddie Jemison, soap opera star Donna Mills, and Euphoria's Barbie Ferreira, in a too-tiny role.

Kaluuya has his usual fantastic on-screen presence; his character is named "O.J.," a choice that anticipates low-hanging jokes that never arrive. But the big story in the cast is Keke Palmer, during career-best work as a character with a wild wardrobe and an even wilder personality. Nope is set and was filmed, in a rural corner of Los Angeles County, allowing opportunities for some gorgeous vistas, some supernatural and some not. In addition to the usual fine shot compositions, Peele does some fantastic things with sound.

The film was "shot with IMAX cameras," as the ads all say, and one of Peele's many great ideas here is the way that the story contrasts state-of-the-art gadgetry with old-school, long-obsolete technology. We see a camera that requires a crank, lots of records, CDs and VHS tapes, and Fry's Electronics, the West Coast chain favored by gadget hobbyists that went out of business in early-2021.

Just as Peele, in Us, weaved together a first-rate horror movie out of such disparate ideas as Hands Across America and the nighttime creepiness of the Santa Cruz Beach Boardwalk, in Nope he draws ideas from many places: The long history of Hollywood's Black horse wranglers, kitschy pseudo-Western theme parks, those "dancing inflatable" things that blow in the wind outside car dealerships, and a horrific incident on a sitcom set in the mid-1990s, the fictitious SNL parody of which is described in much more vivid detail than the incident itself. But the main conceit of the film takes something that's been part of sci-fi films for decades and finds a creative new spin. It leads up to a climax that's more entertaining and better-rendered than those of most action movies this year. And the film's final shot is perfect. It doesn't have the socially incisive kick of Peele's debut Get Out, but Nope is another winner from the filmmaker.