Homeland Takes Half a Season to Find Some Direction

Can we forget about Brody already? 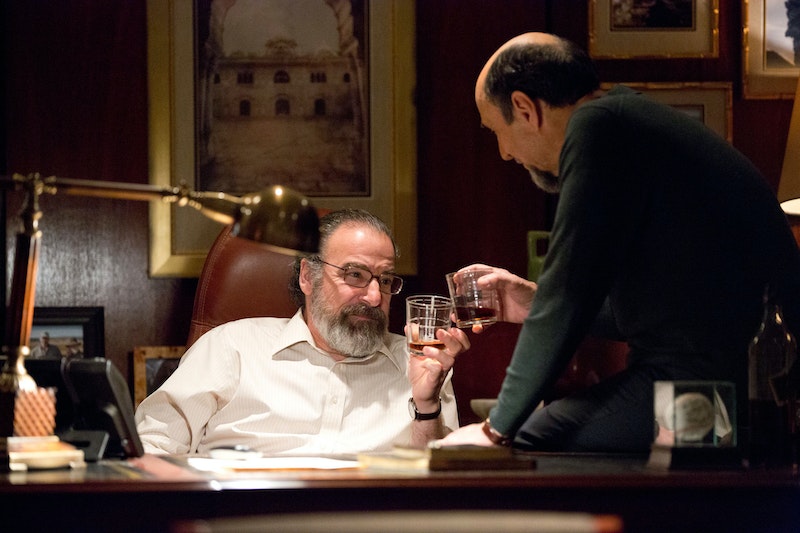 At the end of Homeland's second season, I wrote a blog suggesting that season three would only work if Brody were absent for most if not all of the season. Given revelations over the summer that Showtime executives twice refused to allow Brody to be killed off—even when actor Damian Lewis admitted that, artistically, that would make for way better TV—I didn't have a lot of hope that the writers would heed my advice. Yet, now more than halfway through season three, we've only seen Brody once, holed up in the slums of Caracas, protected by some of Carrie's CIA assets. This was, of course, the weakest episode in a season that so far has been mostly weak episodes.

Season three starts off shortly after the CIA bombing that ended season two. Saul is Interim Director of the CIA, a Congressional committee has been convened to investigate just what, exactly, the CIA knew about Brody (who is now the world's most wanted terrorist), Carrie has again stopped taking her meds, and Dana is about to be released from a mental institution after a failed suicide attempt. As Alan Sepinwall pointed out, the season three premiere "plays almost as if season 2 was unnecessary, and that we're picking up right after the hypothetical explosion from 'Marine One.' Brody is still alive in this version, but doesn't appear, and we have some season 2 characters like Quinn and Dar Adal playing important roles, but for the most part, this episode would require very little tweaking to fit into a parallel universe where Brody blew up the first time."

Jump ahead a bit and Carrie has been committed to a mental institution, on Saul's orders, after attempting to divulge CIA information to reporters, and stating that Brody had nothing to do with the bombing; Saul in fact sells her out to the Congressional committee, and while Carrie is not quite as unstable as we saw her in season one, she's not far off. She's soon approached by a DC lawyer who represents Iranian radicals—the same Iranian radicals who financed Abu Nazir's CIA bombing and are now interested in what Carrie can tell them about CIA operations. Though, as we find out in episode four's "twist" ending, it was all a ploy, meticulously planned out by Saul and Carrie in some off-camera scene from episode one. Of course, this didn't go over too well with anyone. As The Hollywood Reporter's Tim Goodman wrote: "You can't use the camera to both deceive and to lie outright to the viewer. That's not a twist or even a trick. It's cheating. It's hackery. It's also lazy and dangerous. [Executive producer Alex] Gansa and his writers can claim 'twist' when it feels more like 'gotcha' to the viewer."

Goodman is right. You don't have to pay much attention to the first four episodes to start thinking, if this were all a ploy, what are we to make of Carrie's emotional anguish? There are important, "dramatic" scenes from the early episodes that just don't make sense anymore. Here's Goodman again:

…from a storytelling perspective, it doesn't add up. Even if we are to assume, now that the ruse has been revealed, that Carrie was "acting" in case outside forces (the Iranians) or inside forces of dubious intentions (Dar Adal) were watching her, the logic only works part of the time (in public) and even then not all the time. Homeland is using the camera's point of view to manipulate the audience into thinking one thing while winking that it was all fake—and yet the camera catches moments (Carrie saying "F--- you, Saul" at the end of the second episode, or Carrie, alone, crying and feeling hurt by Saul tossing her reputation to the congressional dogs) that had no reason to be faked. It's just too convenient to say, "Oh, even though Carrie knew Saul was going to do that, it still hurt seeing it."

And as the AV Club's Todd VanDerWerff recently added (with a few more episodes' perspective):

I just keep wondering what would have happened if the first scene of the season had been Saul and Carrie talking out what they were trying to do, and then literally everything else had played out as it did. That would have eliminated the multiple readings the writers evidently intended us to have for some of the early episodes in the wake of the twist, but that’s already happened for many viewers, simply because the twist ended up making what emotional investment they believed themselves to have in the early going feel cheap and hollow. And I can’t help but think it would have made many of the later scenes—Carrie’s first contact with the lawyer, her breakdown over seeing Saul testify against her, etc.—feel that much richer in emotional and psychological terms.

Reviews were so bad in fact that Gansa issued a sort of half-apology, telling Entertainment Weekly, "It was a long con and maybe we played it for one episode too many."

It didn't help that some of the season's other early storylines weren't particularly affecting. Morgan Saylor does a fine job as Dana but I'm so over Brody and his whole family at this point, and trying to balance an episode between Dana's troubled teenage romance and all the CIA stuff just doesn't work. Thankfully Dana takes off with some friends in episode six so I assume we won't see much of her for a while; same goes for Jessica and Chris, who aren't really characters at this point, more like background props.

It's not a coincidence that the season's best episode yet, episode seven, "Gerontion," is the first to leave out Brody and his family altogether. Thanks to Saul and Carrie's ploy, the CIA has successfully turned Majid Javadi, a high-level (if somewhat ancillary) Iranian intelligence official, making him the most valuable asset the CIA has ever acquired. Saul and Javadi have a sorted past, mostly from the days before the Iranian coup when they briefly worked together. After the CIA bombing, when Saul learned that Javadi had extorted millions from the Republican Guard, he knew he could leverage Javadi. Still, nothing ever goes quite as planned, and before they can bring Javadi in, he tracks down his ex-wife—who Saul helped flee Iran in '79—and kills both her and her daughter-in-law. Later Quinn is caught on camera at the ex-wife's house, and wanted for questioning by DC police. Of course he's protected as a CIA agent, but the scene where he meets with the investigating detective—played by Homicide veteran Clark Johnson—is truly wonderful: "Have you ever done anything but make things worse?" the detective asks, a question we know Quinn has been asking himself all season, ever since accidentally shooting a kid during a covert mission in Buenos Aires in the season premiere.

Meanwhile, both Javadi and Javadi's former lawyer—the one who "recruited" Carrie after she was committed—have told Carrie that Saul, and by extension the whole CIA, is only interested in using her up; as Javadi says, "He used you to lure me? Saul Berenson, still after all these years, putting other people's lives on the line." And from what we've seen this season, Javadi's right. And that, at least, is a story worth telling.