We and the Bees

The documentary More Than Honey shows how the two go together. 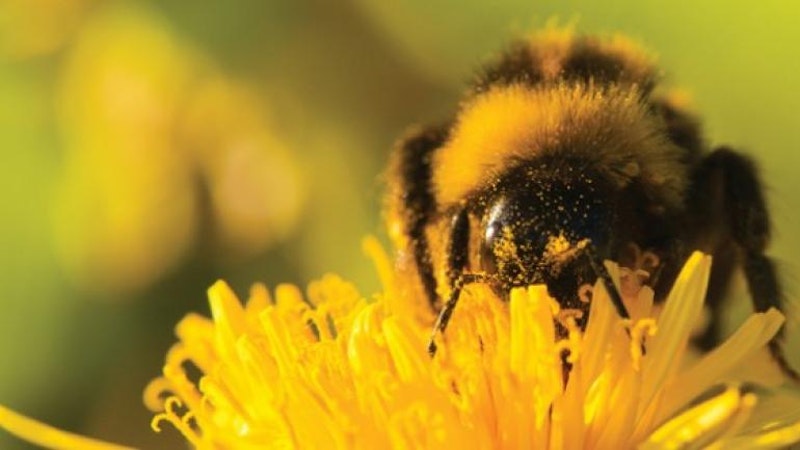 "That's the sound of money. Fresh printed money." The speaker is commercial beekeeper John Miller, and he's referring to the buzzing of bees in the California almond groves. As the documentary More Than Honey (available on VOD this week) discusses, bees pollinate those almond groves, as they pollinate apple trees and just about any other fruit. Without the bees, there's no almond crop and no $1.5 billion almond industry. So the sound of the bees is the sound of people cashing in.

More Than Honey is billed as a film about the large-scale death of bees throughout the world. In fact, it's not focused on any one problem besetting bees, but rather on all the ways, good and bad, in which humans and bees are intertwined. Bees as pollinators make much of human agriculture possible—a fact that led Albert Einstein to remark, "If bees were to disappear from the globe, mankind would only have four years left to live.” Humans have manipulated and bred honey bees for hundreds of years, creating docile, productive bees that can (as many of the beekeepers here show) be handled without masks or gloves.

Markus Imhoof, the director and writer of the film, sometimes presents the global bee die-off in his narration as the result of this domestication of bees, arguing that man has turned "wolves into illness-prone poodles." We've bred away disease resistance, leaving the honey bees vulnerable to bacteria, mites and other diseases. This in turn necessitates mass treatment with antibiotics, weakening the bees' health further. Man has interfered with nature, with tragic results.

This is a familiar enough story. The film as a whole, though, contradicts it in interesting ways. Specifically, watching the documentary, it becomes difficult to see how one can talk about a natural, undomesticated bee. Fred Jaggi, a Swiss beekeeper, discusses the "racial purity" of his bees, and about his efforts to keep his breed traditional and pure—but to do that he has to interfere assiduously in the hive to weed out products of matings with his neighbors' different stock. Killer bees, discussed towards the end of the film, are presented as hardier and more resistant to mites; they can survive without antibiotics, and produce honey without drugs. But those bees escaped originally from Brazilian laboratories that were working on crossing African and European bees. The Killer bees’ presence is unnatural. As is the presence of all bees in the Western hemisphere. There were none before European colonization.

Professor Randolf Menzel, a neurobiologist studying bees at Freie University in Berlin, argues in the film that bees are "super-organisms"—that you can see each colony as one single large animal, with the individual bees as cells or neurons in a vast living thing. Given the interconnectedness of bees and humans, though, it seems like you might see not just the bee colony as one living thing, but the bees and their human tenders/beneficiaries as a single critter. The film's audio cues, in which the sound of a helicopter or the sound of carts being pushed in a grocery store turn into the buzz of bees, are more than just cute transitions. They're an indication of the way in which the bees are extensions of us, like our tools and machines—and perhaps of how we're part of the hive too, a special kind of large vertebrate drone. We buzz with them.

If we're the bees, an absence of bees will have some very bad consequences. You can see some of them when Imhoff travels to orchards in China, where pesticide use is so extensive that all the bees have died. Migrant workers go from flower to flower, pollinating the plants with swab sticks. It's clumsy and depressing and, scientists have determined, not nearly as effective as bees—a testimony both to the extent and the limitations of human adaptability.

If humans can destroy bees, it’s likely that it's humans who will save them, if they are to be saved. And if that happens, it won't be by a return to nature, wherever that is, but by making an actively new treaty with the bee part of our interspecies cooperative. One step could be new, hardier bee hybrids along the lines of killer bees. Another could be reducing insecticides. But however or whether bees survive, and however or whether we do, More Than Honey is a reminder of how thoroughly humans have intertwined themselves with the other life on this planet, and vice versa.