15 Seconds to Decide If Your Life is Worthwhile

On Netflix and letting the dinner burn. 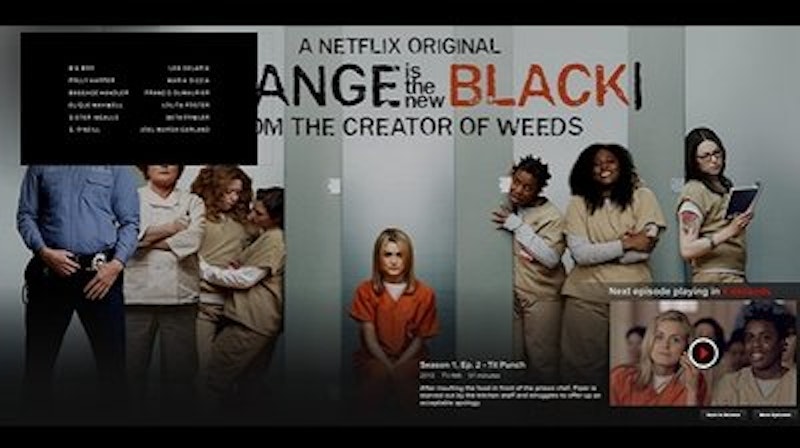 I don’t watch TV in a normal way, mostly because in a family of six, I rarely have remote control access—in fact, the kids weren’t around the other day and I couldn’t even figure out how to use the damn thing. The only thing I see while it’s happening is The Walking Dead on Sunday nights. I much prefer to watch the episodes of a season of a show all together, and quickly. I polished off the first season of American Horror Story in what seemed like a few short hours.

There’s a meme I saw on Pinterest that gave me a laugh. It shows the Netflix logo and red background and says “Netflix: Gives you 15 seconds between episodes to decide if you’re doing something with your life today.” It perfectly summarizes the Netflix binge experience. You start a season of something— for example, I recently finished House of Cards (just when I thought I couldn’t love Kevin Spacey more, it turns out I could). You watch an episode and then, as the credits are running, the next episode pops up in the lower right corner of the screen and says “Next episode starting in…” and it counts down from 15 seconds.

In these crucial moments you must decide… will dinner burn? Can I just get a shower later? Is my work done for the day? How tired am I? Shouldn’t I be taking care of my children?  Or whatever other assortment of questions applicable to you are running through your head before you decide whether to just let “one more episode” roll. The only thing that slows me down from spending four hours in bed watching entire seasons is my husband, who in what I feel is a very old-fashioned, overly-slowly-paced way, prefers to watch one episode at a time. I’m constantly saying just one more episode.

Like they say in the Slate article on how binge watchers are the new couch potatoes, "As long as you are getting up to pee in the bathroom, there is no right or wrong way to watch TV."

If something I want to see isn’t available on Netflix, it’s usually on Amazon Prime. That membership pays for itself in a relative five minutes of my year—free shipping all year is great, but the movies and TV series the kids and I watch on Amazon Prime are well worth whatever that annual fee is. Game of Thrones was my most recent binge on Amazon Prime, where I keep checking to see if Season 3 has arrived in digital format yet.

As my colleague Zach Kaufmann pointed out, Orange is the New Black is one of the most successful new series on Netflix. I’m in the middle of the first season right now and I’m hooked. It’s a well-written, edgy show, which doesn’t surprise me at all considering another of (at least the first few seasons of) my favorite shows, Weeds, was created by the same writer, the brilliant Jenji Kohan.

Netflix bingeing is definitely the way to go for me and for anyone else who, as it may turn out, isn’t going to do anything with their lives today.