Here’s What I Gathered About Lost

... based entirely on the final episode. 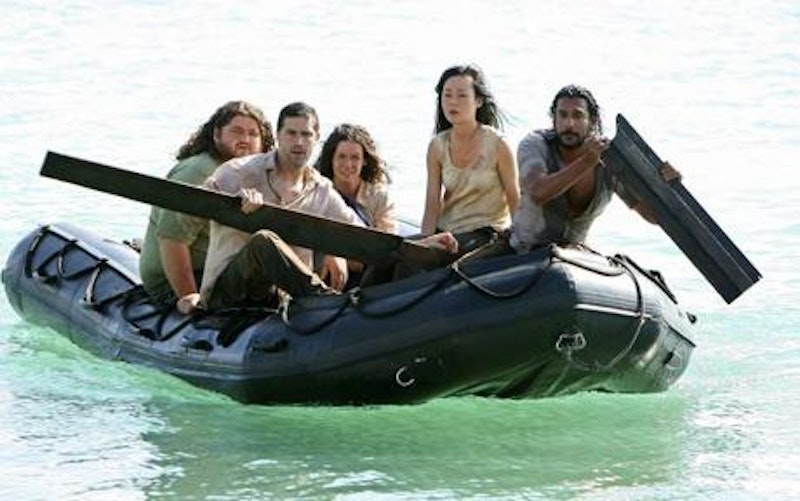 Prior to Sunday night, I’d never watched a single frame of Lost, excepting a couple commercials during (very) occasional sporting events over the last six years. To be honest, I wasn’t even aware the show had only been going for six years, and assumed, given all the hubbub surrounding the finale, that it had been on for nearly a decade. I knew that some people—one of whom was bald, and another of whom had been on that Jennifer Love Hewitt show from the 1990s—had been, shall we say, lost on what looked like a tropical island. I assumed it was an adventure show about their attempts to stay alive, like Ten Little Indians meets Survivor meets Gilligan’s Island.

More or less by accident (certainly not by planning), I ended up watching the finale in the perfect setup: surrounded by friends, all of whom knew the show’s labyrinthine plot and mythology, with the show playing on a state-of-the-art flat screen/surround sound system. For if this truly was the cultural event that the endless themed advertising and the show’s own lachrymose music and flashback sequences implied, then it felt only proper to confront it while armed with the culture’s most up-to-date media-consumption hardware.

So I watched it. It dragged on and on. The people in the room who’d followed the show since Season One seemed, for the most part, terribly disappointed. I didn’t realize the bald guy was evil, but I soon gleaned that he was a good guy at heart who’d been taken hostage by some ghostly spirit.

More than anything, I took this finale to be the ultimate, irrefutable rebuke to the remaining Christian zealots who still claim that American pop culture doesn’t treat their faith respectfully enough. Based on this one episode, Lost looks like the most Christian-friendly media/entertainment event since maybe Passion of the Christ. Sure, the church in the climactic ascension scene may have had a Unitarian vibe, what with its multi-culti stained glass and unadorned “Chiropractor’s Waiting Room” interior design style, but by and large, this episode (movie, really) abounded with fade-to-white, annoyingly Heaven-centric allegorical imagery that wouldn’t be out of place in the Thomas Kinkade movie Christmas Cottage.

Which is to say, regardless of whatever clout the show has achieved among its more discerning audience members, it seemed pretty lame. That said, the numerous emotional moments throughout—particularly the ones where characters psycho-spiritually reconnected with one another and remembered their past lives—were incredibly affecting. The romantic montages were so utterly uncreative and designed for maximum universal understanding that even I, who didn’t know a single one of these people, felt rather moved by their revelations. The cliffside fight scene, and an early, distinctly Western-ish showdown involving the evil bald guy and some “neutral” older characters, were also quite well done in terms of emotional payoff.

Lost’s popularity seems totally understandable, and even earned: light hippie-Christian mythos, a Star Wars-style blend of canonical storytelling styles from John Ford to Amazing Stories, a remarkably pan-ethnic cast, with its tone and pacing cribbed right from Stephen King’s larger-scale work. I can think of no better recipe for acceptance by the American viewing public circa 2004-2010, particularly given that Lost’s run perfectly coincides with the rise of the TV series to the dominant mode of narrative storytelling in our culture.

I got the sense, too, that this was in some ways the end of an era. Lost is unique in the realm of esteemed early 21st-century TV drama in that it’s on network TV rather than cable. The event yesterday, with its retrospective lead-in programs and endless commercials (many of them designed purely for the one episode), had the whiff of pre-Internet monoculture. Unlike similar finales from decades past, the discussions surrounding this episode won’t only happen among friends or co-workers over the next couple days, but online among message-board participants and bloggers over presumably the next few years. The whole series, including alternate endings, will likely be on DVD by the end of the year. The boatload of themed commercials, occupying some of the most prime advertising real estate of the decade, will be simultaneously enshrined on YouTube and skipped over by those viewers who recorded the show on their DVR.

Watching the event live was an excellent glimpse at our corporate media in microcosm. ABC, a news and entertainment megalith, sells ad space to other giant companies, most of whom are also owned by even bigger corporations, who in turn create ads that play on the show’s imagery and thus appeal to Lost’s enormous audience. Then ABC runs its own ads for Jimmy Kimmel Live, which will be entirely Lost-themed when it returns on Monday. The 11:30 local news gets in on the action by tailoring their tagline to the show, and by promising to cover the Lost finale on their program. This is how a culture is taught that marketing is entertainment, and that entertainment is news. Watch network TV for even a few hours and they become interchangeable. And so we get politicians that sell themselves like lifestyle brands and appear in People magazine. We get a political media that reduces major national issues to dust-ups between Camp A and Camp B, and which then follow the dust-ups at the expense of talking about the actual issues themselves. And we get institutionally cynical: when yet another round of commercials came on, the group of us laughed at the demonstrable lies on display (like a message about the new “healthy” options at Chili’s) in the exact same way we laughed about the demonstrable lies in the 2008 presidential debates. What’s the point in politicians being more honorable or wedded to reality than your typical phone-network provider spot? Even a false ad can make a company millions of dollars, just as even a lying politician can be elected, and thanks to advertising, the processes by which someone achieves either goal are largely the same.

This is not Lost’s fault, and the show itself doesn’t even seem that bad. Campy, self-serious, a little narratively incoherent, sure. But not bad. If anything, I saw the show’s emphasis on dual-realities and the characters’ interpretations of same as an able metaphor for the culture outlined above. From what I could tell of Lost, there’s a group of people, some of whom subscribe to one theory about their surroundings and the rest of whom subscribe to another. They’re at irreconcilable odds, though there’s some potential end-of-days scenario on the horizon that will end the argument once and for all. And regardless of whoever’s proven right, they’ll all be brought together, unified under a single reality and delivered from terminal unknowing.

I can see why such a story would resonate among a culture that’s been beaten over the head for the past decade with commentary about red states and blue states, Democrats and Republicans, East Coast Elites versus Real Americans. When we’re bombarded with messaging about the country’s various immiscible factions and simultaneously made to equate politics, advertising and entertainment, who wouldn’t respond positively to the promise of some oncoming permanent truth? A decade from now, when the Internet’s reorientation of the Advertising-Money-Power equation has either collapsed or changed beyond recognition the network-television paradigm so embodied by Sunday night’s event, we may look back and think: We once were lost, but now are found.