Too bad we've forgotten that. 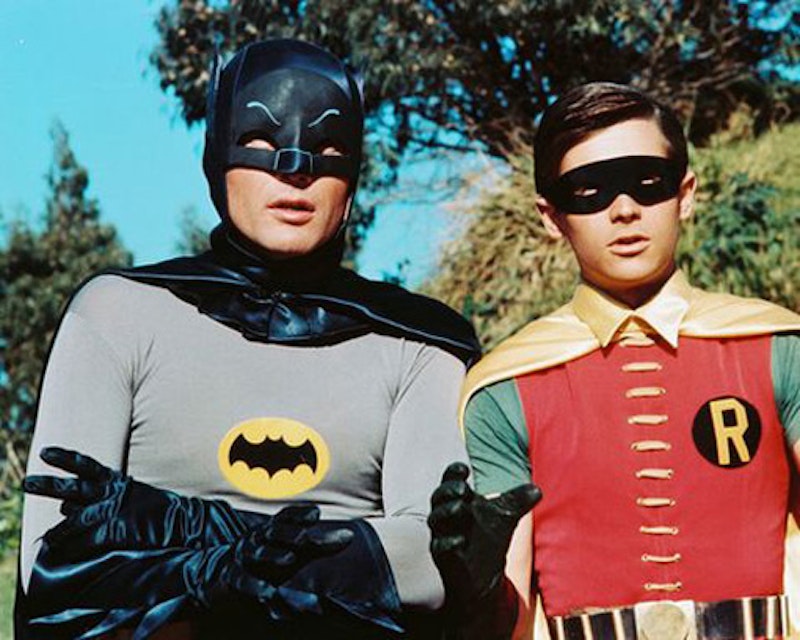 Well, you’re wrong—and so are you, and you and you. Because the best superhero movie of all time is Batman: The Movie, from 1966, based on the classic television series starring Adam West as Batman and Burt Ward as Robin.

Why is it the best superhero movie of all time? If you saw the TV show you know the general outlines. Adam West does not have foam-rubber pecs like his bat-successors, but he does have a cute little paunch which is clearly outlined in his skintight bat-costume, said paunch sitting unashamedly atop his shiny external bat-underwear. It seems Robin has poured a quart of rabid bees down his green short-shorts and is bravely fighting the pain by punching his fist into his palm while imitating a (much) skinnier William Shatner. And, of course, there’s the Batmobile, Bat Repellant Shark Spray, Bat Knockout Gas, and all other kinds of Bat ephemera, each carefully labeled for those who otherwise might confuse the Bat Repellant Whale Spray with the Bat Ladder.

While the standard Bat TV silliness (including Pow! Bam! sound effects) is certainly welcome and awesome, the creators also take full advantage of their bigger budget. On the most basic level, this means we get Batboats and Batcopters. More generally, it means that the film looks fantastic; the colors are crisp, vivid and saturated, more comic bookie than the comic books themselves. The music, by the legendary Nelson Riddle, is top notch; the opening sequence, with spotlights illuminating running thugs and various overacting villains, is in itself more stylishly hip than anything in the superhero efforts of name directors like Tim Burton and Sam Rami.

Perhaps the best use of that film budget, though, is that we get four fabulous villains. Cesar Romero as the Joker has the least to do, though he certainly seems to be having the time of his life responding to the Penguin’s nautical submarine commands with an unhinged “Yo-ho!” or fluttering in terror while being stared down by Catwoman’s thoroughly inoffensive-looking housecat. Frank Gorshin as the Riddler is, as always, incandescently insane—after he accidentally hits the Batcopter with one of his skywriting riddle missiles, his wonder is so intense that it blurs the line between ecstasy and disappointment. Burgess Meredith as the waddling Penguin delivers some of the film’s best lines, declaiming with squawking relish as he contemplates the possible death of his henchmen, “Every one of them has a mother!” or urging his submarine crew to dive with the immortal exhortation, “Run silent, run deep!”

But it’s Lee Meriwether, in her first and only outing as Catwoman, who steals the show. Her clinging black skin-tight outfit is so hot it’s a wonder the screen doesn’t melt; Halle Berry and Michelle Pfeiffer might as well just throw on some shapeless sweatshirts and go home. But beyond that, how can you resist her sultry exclamations of  “Purrrr-fect!” or her heartfelt “Mroooowwr,” delivered with such vindictive enthusiasm that one of Penguin’s nearby goons looks like he’s swallowed his gum? Perhaps my favorite scene in the film starts with Riddler, Joker and Penguin framed by a black bar on the top of the screen—when the camera pulls back, we see that it’s the leg of a reclining Catwoman.  And then, as the three other villains continue to talk, Catwoman nonchalantly licks the back of her hand (paw?) and then rubs it repeatedly across her face, giving herself a cat bath.

In part, the greatness of this Batman is simply a large smattering of invention, genius, and superior absurdist comedy writing—the Batcopter plummeting to its doom, only to be saved at the last minute when it, by happenstance, crashes into the outdoor display area of the Foam Rubber Wholesalers Convention; the flapping penguin flippers affixed to the rear of Penguin’s military surplus submarine. But I think, too, that the general overall approach to superheroes here is, in general, a lot smarter than you find in most films in the genre.

Put simply, this Batman treats superheroes as if they’re ridiculous. And that’s exactly right; superheroes are ridiculous. My friend, Comics Journal writer Tom Crippen, titled an article about Superman “The Big Dumb Dream,” and that just about says it all. The desire to be so strong and fast and smart and wonderful that you can save the world with one hand while winning at backgammon with the other—it’s cute when kids imagine it, embarrassing when adults do, and silly at all times and in all seasons. It’s not an accident that superhero parodies, from Captain Marvel to Plastic Man, to MAD magazine, to a contemporary title like Empowered have been the most consistently inventive portion of superherodom almost from the genre’s inception. Not because you have to be smart to parody superheroes, but because you have to be at least somewhat stupid not to.

Batman managed to be a particularly brilliant parody because it was both merciless and toothless. Created during the 60s, when faith in authority was undermined from multiple directions, Batman is never anything but a stooge and a fool. He never develops or Learns To Trust Himself To Overcome Adversity, as happens, for example, in the (still quite entertaining) “Mystery Men,” or the televised “Misfits of Science.” Batman is always purely stupid and stupidly pure, drinking milk and cocoa while out on a hot date as Bruce Wayne, or refusing to dispose of a bomb where it might hurt some cute ducks. Batman is The Man, and The Man is not (as Dark Knight would have you believe) cool or edgy. The Man loves to give orders (poor Robin is always flipping some switch or handing over some piece of equipment that Batman could just as easily have flipped or gotten himself.) The Man is serious: if the villains are always laughing uncontrollably, Batman never cracks a smile. The Man is a lot less competent than he looks (as Batman proves when he inadvertently, and apparently permanently, scrambles the brains and personalities of the UN security council.) And as a corollary to that, The Man is dumb.

But while The Man may be dumb, he’s also adorably doofy—and he always wins.  The villains are attractively malevolent, but they’re less competent than the good guys. And who among us doesn’t wish that the guards standing athwart chaos and shouting “Stop right there or I’ll blow you away motherfuckers!”—well, wouldn’t it be nice if they cared a little more for cute little duckies? Or that accidental scientific screwups led to security council members who could see each other’s point of view, rather than to billions of gallons of oil dumped in the Gulf? Batman makes the big dumb dream smaller and a lot less dumb, but it’s still the same dream. It both refutes all that superhero silliness and fulfills it. Which is why, after more than 40 years, the 1966 Batman still reigns supreme.