Hell Is Other People 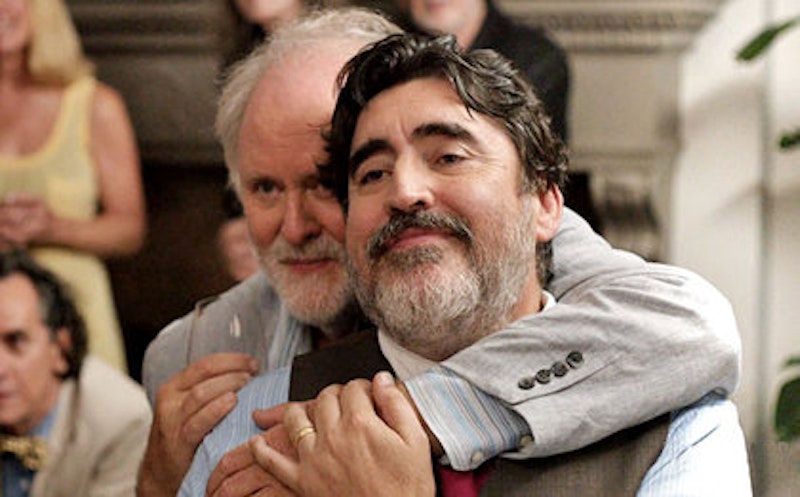 Let’s get the exposition behind us already. Love Is Strange is a dramedy about two men—painter Ben (John Lithgow) and music teacher George (Alfred Molina)—who wed late in life, then are forced to sell their apartment and move in with loved ones when the parochial school where George works fires him for making his love legal. In his early 70s, Ben is voluble, long-winded, and forgetful, while the younger George—whose age is never disclosed, though he’s likely in his 50s or early 60s—is more retiring, more circumspect. They’ve been an item for nearly four decades, and in their scenes together, Lithgow and Molina convey the lived-in chemistry of two people who’ve surmounted a multitude of ups and downs en route to graying, muted cohabitation. One of the virtues of Love Is Strange is that the sexuality of its protagonists seems almost peripheral to what transpires in the movie; really, Ben and George could be any aging couple who caught a bad break and found themselves forced to throw themselves on the mercy of their wedding guests.

After the apartment goes on the market, George finds himself sleeping on the couch of two young gay cop friends—trouble is, these friends constantly throw parties. Anyone who’s ever had a terrible roommate—my hand’s raised here—will relate to Molina’s stolid suffering as house music blares and dumb Trivial Pursuit games rage late into the evenings. Ben, on the other hand, bunks with nephew Elliot (Darren Burrows, who I spent half the movie scratching my head over until I realized he was on Northern Exposure way back when) and his wife Kate (Marisa Tomei, who steals the movie) and their teenage son, Joey (Charlie Tahan). Which protagonist one envies least is a matter of perspective. Ask yourself what’s worse: discovering that your close friends are assholes who live to entertain, or finding out that a unit of your family is quietly falling apart and secretly resents you for being around to witness that dissolution?

Love Is Strange proceeds at a sort of leisurely leap-frogging through time pace; you can feel Ben and George’s presences becoming impositions on their various benefactors. There are weird, one-off moments and potshots that suggest subplots unexplored or verge on Todd Solondz suburban ennui (though this is a Manhattan tale) and some set pieces so bleakly ironic that you ache inside.

(At one point Vlad, Joey’s friend, is introduced to Kate and Elliot’s maid—that there is so much domestic help in a movie where everyone lives in tiny overpriced apartments is just weird to me—who is also Russian, and then we never see the maid again; why? Is it to underline that Vlad is a year or two older than Joey, even as though this is stated explicitly later on? Part of me appreciates random stuff like this in films, but another part sees it as lazy or sloppy.)

In my favorite of these scenes, Kate struggles to finish a novel while Ben rambles on incessantly; as she humors and half-heartedly engages him, her body tenses up, her hair mousy, her body tucked into an office chair. When Ben complains that he’s not painting because there’s nowhere for him to work in the apartment without interruption, we swallow our laughs as Kate swallows hers.

There is more showing than telling in Sachs’ direction. We figure out that George handles the details, likely from necessity and because he’s sharper, more exacting; the scene where he’s giving a young girl a piano lesson, demanding a more vibrant performance from her is both instructive and moving; for most of the movie, Molina buttons the character up tight. Ben? He’s is flightier, slightly lost, less on top of things, and possessed of a fragility that Lithgow embodies fluidly—hair askew, eyes constantly squinting, ancient smock paint-splattered. If we feel that we know these men 30 minutes into the movie, we know they know one another far better than anyone ever could. For their parts, Kate and Elliot are absent parents wrapped up in their careers who are drifting away from one another and their own son; in several of the hardest to watch scenes, Ben gets crushed when these tectonic plates collide.

So: hell is other people, even those we think we know well. But when you’re deeply in love, distance is its own special hell, and those extended separations are brutal—emails, texts, and telephone calls bridge the divide somewhat, but there’s no substitute for being in the presence of one’s significant other, being able to touch them or watch a knowing smile crease their features. And when Ben and George are able to unite—impromptu, at a bar, at a piano recital, or before the desk of a real-estate agent presenting an almost dystopian rental lottery scenario—Sachs has earned those emotional wallops. There’s a great scene, late in the movie, where the couple is parting after a night out; they’re at a subway staircase, flanked by a diner dripping with electric neon. They embrace, and then Ben gingerly descends the stairs, with George watching from a remove to ensure his partner will make it down safely. Then both men disappear from the frame, and the director lingers, unwavering, stranding us in that twilit moment.