Eddie Martin's All This Mayhem tells the story of 90s skateboarding legends Tas and Ben Pappas. 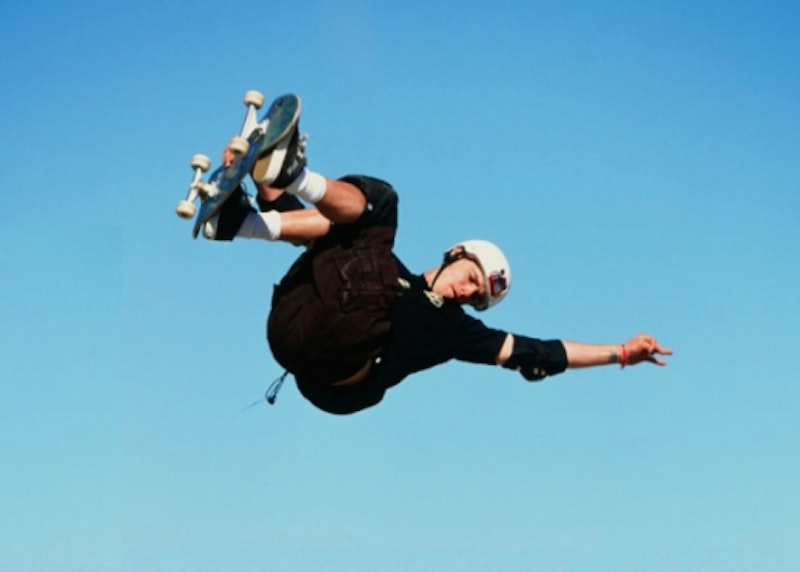 All This Mayhem, a documentary directed by Eddie Martin, chronicles the tumultuous lives of Aussie skate legends Tas and Ben Pappas. Like so many of us who become obsessed with extreme sports, the Pappas brothers were propelled by recklessness and self-destruction—characteristics that fucked up their lives but also enabled them to achieve greatness.

Growing up in a home where gnarly fights were constant, Tas and Ben found an outlet for their frustration through skateboarding. The metal half-pipe at the Pahran skate park in Melbourne was their stomping grounds until they moved to the U.S., and there’s footage of the brothers skating the ramp throughout the movie. In the beginning, they both destroy the half-pipe, fueled by a fierce hunger to infiltrate the American vert scene. But, by the end of All This Mayhem, the footage of Ben skating the ramp connects to the reality that he couldn’t escape his self-destructive tendencies.

Once they got sponsored and moved to America, the Pappas brothers only pushed themselves harder, eventually tattooing their names onto the history of skateboarding. They came of age in the early 1990s—a time when street skating was first blowing up—and they were some of the first vert skaters to combine technical flip tricks with massive, Hosoi-style airs. While a lot of his peers were content with landing individual tricks for video parts, Tas linked several pioneering tricks in his now legendary run in Mad Circle’s Let the Horns Blow. As Tas says, he also happened to be tripping on acid during this run—a feat of drug-addled athleticism on the same level as Dock Ellis pitching a no-hitter on LSD.

In addition to the Pappas’ ridiculous and eventually tragic partying—a side of the skating world that’s often left out of popular depictions—All This Mayhem covers the negative politics that accompanied skateboarding’s rise in popularity during the late-90s. Tas and Ben became top contenders in the vert contest circuit, culminating in Tas beating Tony Hawk at the 1996 World Championships, even though he’d broken his rib earlier in the day.

When the ‘99 X Games—a contest that put skateboarding on an internationally-televised pedestal—were held, the question of who would land the 900 was at the forefront of every vert skater’s mind. All This Mayhem shows footage of Tas coming close to landing it at the Mission Valley YMCA, and he planned to try again at the X Games. He didn’t put much effort into trying to win the overall contest, wanting to focus on the best trick portion. But, despite the fact that every other best trick contest of the year was open to anyone in the general competition, Tas wasn’t allowed to compete in the X Games best trick because he didn’t make it to the overall finals; no one told him beforehand that this was how it would work. It was in this best trick contest that Tony Hawk landed the first 900 on a skateboard.

Hawk was an ESPN darling—a clean-cut and soft-spoken kid from Southern California who essentially told parents across America that skating could be a positive activity. As Tas tells the story, the people at ESPN wanted Hawk to land the 900 at the X Games, not some ratty Australian who, along with his brother, was infamously unpredictable and provocative. Although you might expect him to tell the story with more bitterness, Tas says, “I just wish I had a fair go at it.” Behind-the-scenes shadiness has become a given in mainstream sports, but it’s more unsettling to hear about this in the world of skating—a sport that prides itself on individualism and its DIY ethic—which is one of several reasons why All This Mayhem is riveting.