Twisty dies as the season finally picks up. 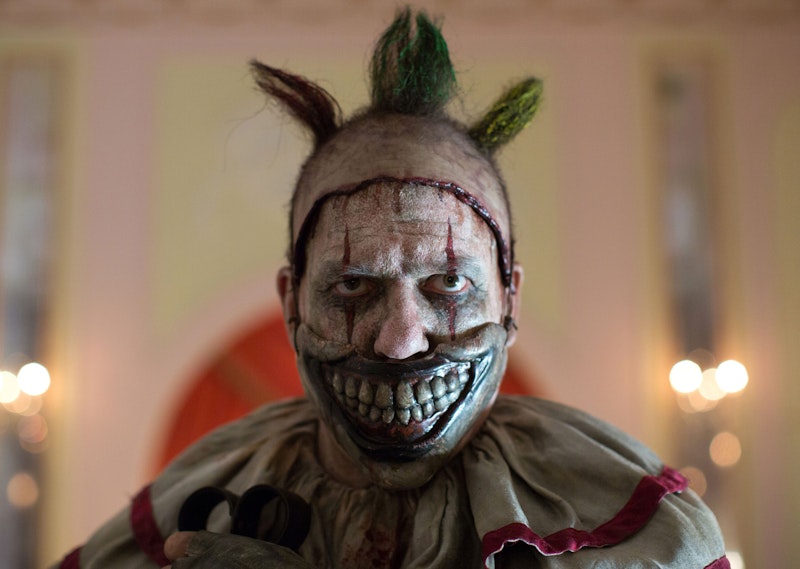 Finally, an episode this season that was both terrifying and moved the plot forward! Although Sarah Paulson and Jessica Lange are relatively absent, it left room for the lesser-known characters to take shape and develop. This Halloween episode was probably the creepiest of the season (so far) and included the backstory of Twisty the Clown.

• The episode opens with Edward Mordrake as a creepy, dapper fucker asking every one of the freaks about their saddest stories. “The Human Seal” recounts his story of how the world feared him, so he decided to tattoo his entire body sans his face. The half woman admits to slicing a man’s leg open and cutting an artery, killing him because she didn’t see those legs as a part of him—not sure that defense would hold up in court, girl, but okay.

• Really invested in the on-screen romance of Emma Roberts and Evan Peters’ characters, as they’re dating in real life. Also, this pairing is finally making things happen in the plot. Twisty’s captive gets loose only to be chased down and recaptured right in front of Jimmy and Esmeralda, revealing to them the location of his lair. The escape and recapture scenes this season are the most terrifying moments because the viewer never knows when Twisty will get tired of playing with his captives and slaughter them.

• Jimmy and Esmeralda are bludgeoned and captured by Dandy, and he claims, “The real Halloween show can begin.”

• Elsa reveals that she lost her legs while making an adult film. The men drugged her, strapped her down and chain-sawed off her legs while the camera rolled. This is enough to have Edward Mordrake want to take her with his troupe of dead circus performers; that is, until he hears Twisty’s music in the distance and saunters off.

• Dandy attempts to saw Esmeralda in half in a box while Twisty’s captives watch. When they escape, Jimmy is recaptured and almost stabbed by Twisty. That’s until Edward Mordrake shows up and demands that Twisty share his darkest hour with him.

• The audience finally gets to hear Twisty speak as he recounts how circus performers wrongly told police he was a child molester. Sad, and unable to find work, Twisty attempted to blow his own head off with a shotgun. Failing, he vowed to get revenge on the circus performers and to bring joy to children. This would explain why he chose to keep his captives alive; he simply wanted to perform for them. I’m not sure if Ryan Murphy meant to include this flashback to make us feel sympathy for Twisty, but it didn’t really work for me.

• Edward Mordrake finally kills Twisty by stabbing him repeatedly. Some fans may be sad, but this leaves room for Dandy (the true terrifying character on this show) to flex his muscles. Dandy returns home and slaughters his housekeeper, the only person in his home to fight back when he was acting like a selfish brat. I’m eager to see what terrors his character will bring to the rest of the season.

• All of Twisty’s captives escaped safely and Jimmy was considered a hero. The parents of the young boy who was captured last episode bring a crowd to the freak show with fresh baked brownies and promises to buy out the show. This was probably the most light-hearted moment of the season so far.