He's Not The Good Cop

Brace yourself: Bad Lieutenant is out on DVD again. (Grade: B+) 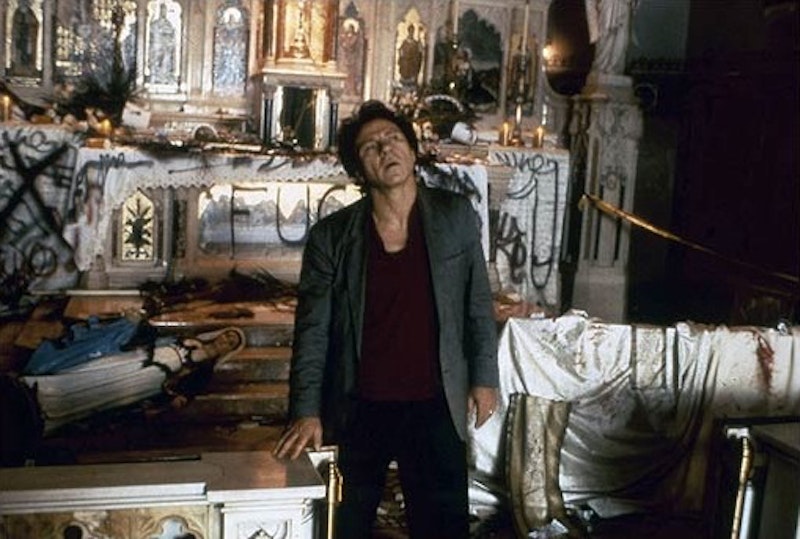 Harvey Keitel’s performance in Abel Ferrara’s 1992 NC-17 drama Bad Lieutenant is the sort that typically gets described as “brave” by critics, which really means that his character is despicable, self-immolating, and sadistic. As written, the unnamed title cop is a gambling addict, omnivorous drug addict, alcoholic, serial adulterer, and unrepentantly bad father. He’s not terrible at his job, but he’s not particularly great at it, and certainly not well liked at work. This is not Permanent Midnight, a tale of functioning addiction, or The Lost Weekend, a chronicle of substance abuse that hints at redemption in the end. Bad Lieutenant is just a downward spiral that starts sad and ends horrific. It’s an evocative time capsule of pre-rejuvenation New York, and, indeed, an impressive, visceral showcase for the perennially underrated Keitel. But Ferrara’s film, despite its hard-boiled nihilistic veneer, is eventually weighed down by his sentimental treatment of religion. He shocks us into submission with gratuitous violence and drug use, only to contrast this gratuitousness with a nun whose total purity seems overly tidy in comparison.

Echoing Kubrick’s structuring of A Clockwork Orange, Ferrara front-loads his film with the most salacious material, which allows him to focus on storytelling and character development for most of the remainder. The movie is set in New York during a Mets-Dodgers NLCS (a fictional one, however, where the Mets win). Keitel’s lieutenant has multiple wagers going on the series, and he takes bets from his colleagues as they peruse murder scenes. He also keeps a steady coke-and-heroin high going throughout the day, punctuated by scotch and Budweiser. He steals drugs from crime scenes and sells them to dealers. He intimidates petty thieves at gunpoint and visits prostitutes during the workday, only to come home and fall asleep stoned and hungover on the couch while his daughter watches cartoons and his wife entertains her extended family. The first third of Bad Lieutenant is a parade of depravity, culminating with a scene where Keitel interrogates two teenage girls for driving without a license; it’s perhaps the least graphic of the film’s establishing scenes, but also the most emotionally difficult. The character seems so pathetic, drug-addled, and misogynistic that you almost wish for the comeuppance that his bookie keeps foreshadowing. The man seems not only beyond redemption, but unworthy of it.

And then, in case Ferrara and D.P. Ken Kelsch’s daylight-free chiaroscuro didn’t make you feel claustrophobic and filthy enough, two Hispanic teenagers rape a nun. Also like A Clockwork Orange, Ferrara shoots this rape scene in a nearly unforgivable way, with more color and sultry lighting, not to mention fisheye closeups, than any other portion of the movie. Strange as it may seem, the rest of Bad Lieutenant is notable for its subtlety; as unsettling as the material gets, Ferrara always feels like he’s coming by it honestly. We’re getting to know an ugly man, and the movie is shot in an appropriate verite style. But Ferrara overplays his hand in the rape scene, as if we wouldn’t understand how offensive the act is unless he supplied close-ups of neon-lit church icons.

For the rest of the film, the nun is a picture of Christian forgiveness amid the continuing immorality of Keitel’s world. His eventual come-to-Jesus moment is affecting, mainly for the complete unself-consciousness that Keitel brings to it, as he does to the entire movie. But it’s also forced, incited by a nun whose characterization is too perfectly the opposite of the lieutenant’s. Ferrara’s film wallows in sleaze and dirt, but its last third is, if not exactly tidy, then at least too cleanly delineated to fit with the earlier moments.

Nevertheless, Bad Lieutenant is the work of an iconoclastic director and a selfless actor. Ferrara’s script, written with Zoë Lund, the star of his earlier Mrs. 45, is uniquely unflinching and uncompromised; when it oversteps itself thematically, it does so on the writers’ own terms, and never feels like a victim of corporate rewrites or commercial concerns. Bad Lieutenant is hard to watch, and even harder to recommend, but I admired every impulse behind it.