Palo Alto is a shameless and de-fanged rip-off of Less Than Zero. 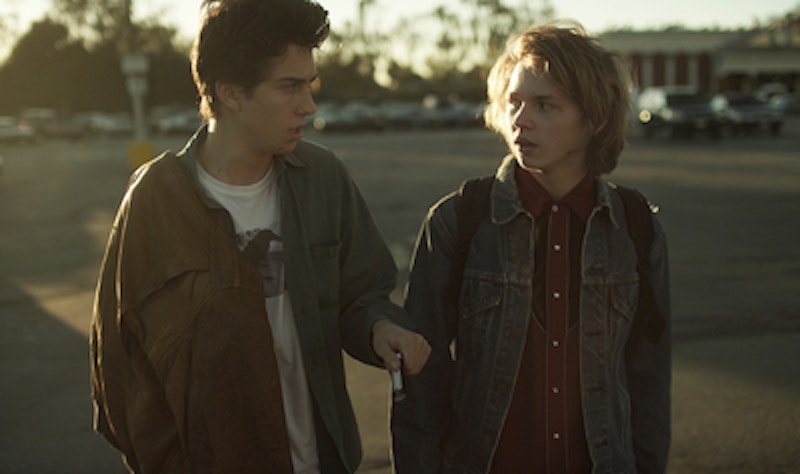 Maybe James Franco knew he had a dud on his hands with the film adaptation of his book Palo Alto when he hit up that girl on Instagram and needed a zesty spin to keep it from sinking into obscurity. Now at least it’ll have an asterisk, something to give life to the lifeless. Watching Palo Alto is like drinking lukewarm Diet Coke with a whole bottle of Valium. It’s brain-damaged and gray, as stiff and formulaic as the cheese its characters would scoff at. The most important thing to note about Palo Alto is that it’s a complete rip-off/homage to Bret Easton Ellis, specifically Less Than Zero. All the signifiers are there, obvious and specific: the upper-middle-class suburban California malaise, lusting predators, ambiguous sexuality, a baby-faced protagonist, underage drinking, drugs, absent parents, helplessly cool teens, and a slight shim of violence and evil, with the sheen of a $300 pair of Ray Bans. If you’ve read Less Than Zero, it’s hard not to focus on how derivative and less interesting Palo Alto is than Ellis’ first novel.

Then again, Franco and Ellis probably had similar experiences to draw from, growing up in Palo Alto and Sherman Oaks, respectively. Suburban teen ennui is as broad a genre as romantic comedy—it’s all about the place, the time, and the culture. The Perks of Being a Wallflower is not the same as Thirteen, Saved, or The United States of Leland. Or Kids. The milieu of Palo Alto is exactly the same as Less Than Zero, but with much less of everything: less edge, less teeth, less sex, softer drugs, less trouble, virtually no violence, and nothing going on. Who knew you could strip Less Than Zero of even more content? The stakes are so low they’re in China. If you’re going to make a movie about cool teens being bad, they should probably do more than smoke cigarettes and joints and get into low-speed car accidents. It’s Ellis for pre-teens, really. Like, smoking a cigarette inside is the most rebellious thing the lead actress does. If you’re going to rip something off and add nothing, at least exaggerate a little! Kill people! Overdoses! Actually, that sounds a bit too much like the melodramatic and depressing Hollywood adaptation of Less Than Zero from 1987.

That’s the rub: writer/director Gia Coppola absolutely nails the style and mood of Ellis’ novel. Aesthetically, Palo Alto is painfully on point, and I spent most of the time wishing that an adaptation of Less Than Zero had been made with this attention to detail and atmosphere. It’s the kind of “tone poem” that Ellis talks about a lot on his podcast, and it’s a shame that the story is a derivative and defanged rip. The most annoying thing is how obvious the connections are and how shameless or air-headed the execution is. At least get explicit! Palo Alto is an obnoxious movie because it thinks it’s buckets cooler than it is, and doesn’t feel the need to rely on anything but surface qualities and sign posts, and goes along without a climax or any sense of purpose. It’s not about the void: it is the void.