Borat Subsequent Moviefilm is the best American political film of the year. B 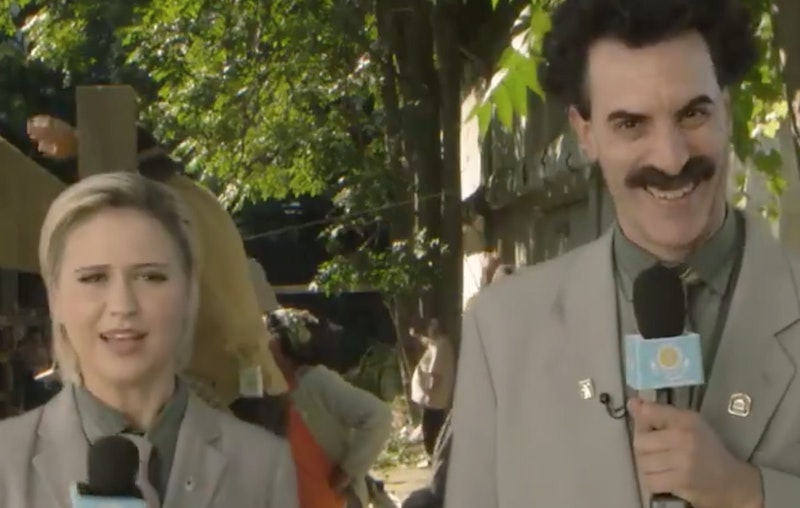 The closing credits of Borat Subsequent Moviefilm begin with the admonition “NOW VOTE—OR YOU WILL BE EXECUTE.” It comes at the end of a surprisingly funny if uneven film, and a return of a character officially “retired” and culturally exhausted since 2007. Sacha Baron Cohen’s first film as Borat, Borat: Cultural Learnings of America for Make Benefit Glorious Nation of Kazakhstan, was a surprise hit shortly before the midterm elections in November 2006. Not that the film had any effect on the midterms, not any more than Borat Subsequent Moviefilm will have on the election next week. But those final two title cards are so disappointing, because miraculously, Borat is still a hilarious and anarchic character that turns the United States inside out like a glove.

Cohen’s second best character returns to America after 14 years in a labor camp: the first Borat film so embarrassed his home country that he was tortured in public and worked to the bone. He’s taken out of captivity to “deliver a gift” to Mike Pence. The Kazak official thinks this will ingratiate his country with the Trump administration, because they’ve heard what a “pussyhound” Pence is. They buy him a monkey wife, but Borat’s daughter eats the monkey when they’re in the cargo container together on the flight over. Borat supposes that his daughter will do, but only after an extensive makeover. The movie follows Borat and his daughter as they travel across America looking for Pence, and when the attempted “offering” at CPAC fails, they scramble in order to save Borat from brutal execution. But back to the end credits.

“NOW VOTE”—okay, for who? Donald Trump? Amazon produced and distributed Borat Subsequent Moviefilm, and like Netflix, they’ve been the only ones to get films into popular discourse post-pandemic. Who they want you to vote for is obvious, but the cowardice in never specifying who, or even what, to vote for, is enraging. If you’re going to smudge an pleasant surprise like that, why not just ruin it? Turn the ending into a Joe Biden coronation, have Borat suck his cock, go bananas. It’s not important to me, because at least that would be saying something. “NOW VOTE”—what does this mean? A film that amounts to nothing! Those final two title-cards would only be justified if they didn’t break the fourth wall—as it is, their infuriating disingenuousness tarnish an otherwise good film that’ll probably end up being the most successful American political film of 2020, and I don’t mean commercially.

Unlike what some have said, this isn’t a film concerned with “pointing out hypocrisy.” Simply through following Borat, we see the country we live in every day with new eyes, horrified eyes. What can one say when confronted with images of assault rifles outnumbering lawn chairs at a “March for Life Rally”? Cohen successfully getting the crowd to sing along to “Obama was a traitor/America, he hate her” and to cheer on Democrats either getting “Wuhan flu” or “chopped up like the Saudis” is not a smug drive-by from one of Stephen Colbert’s Ivy League comedy writers, or a tweet tossed off on the toilet by pick your C-list celebrity. This is much darker and truer than anything offered on The Daily Show or any of its bastard programs.

The beauty of Borat is not in the “gotcha” setups, the real people he and his “daughter” Tutar Sagdiyev (Maria Bakalova) fuck with, or the awkwardness of these interactions. I do think that’s been played out, and with worse writers, this easily could’ve been a disaster. The only reason Borat Subsequent Moviefilm works is because it’s so well-written, by its eight (!) screenwriters: Cohen, Peter Baynham, Jena Friedman, Anthony Hines, Lee Kern, Dan Mazer, Erica Rivinoja, and Dan Swimer. Ninety-six minutes, and the movie moves, with many of the biggest laughs coming from Borat’s voiceover, as when he hides out in a Synagogue “until the next mass shooting,” or laments the end of Kazakhstan’s “Running of the Jew” parade. “Kazakhstan all we had left was Holocaust Remembrance Day, where we commemorate our brave soldiers who ran the camps.”

But back to the synagogue. The big jokes in this movie are constructed as in Wilder, not Guest, and certainly not Jon Stewart, whose 2020 film Irresistible was as out of touch as a paraplegic. Borat’s daughter runs away from him and learns that women can read and drive in America, among other things they aren’t allowed in Kazakhstan. She throws away the “manual” that Borat gave her that says that vaginas are full of teeth, and she discovers “the one true book—Facebook.” She shows him a meme that says the Holocaust never happened. Borat is devastated, so shaken he must visit a synagogue incognito “as a Jew” to find out what Hitler really did. Two very patient Jewish women explain to Borat that the Holocaust did occur, and he’s ecstatic. His people are heroes! That’s great writing.

Great lines, too, like when Borat drops off Tutar at the “babysitter” (Tutar is a grown woman). The “babysitter” insists that women can read, but Borat protests, warning her that Tutar is feeble-minded as all women are, “the strings in her brain will break.” The humor isn’t in the babysitter’s horrified reactions but in the picture of contemporary America that the whole film shows. Unlike the first Borat, “gotcha”’s don’t drive the movie. In 2006, America’s blister still needed to be prodded and irritated. Now, our blisters have turned to boils and they’ve popped. What’s the point of playing with blood and pus? Just take a picture of it.

Through Borat, we see ourselves. Political comedy was (thankfully) rarer in 2006, but Cohen’s film holds up much better than any of his contemporaries. We don’t remember Borat’s various visits to gun shops or costume stores, we remember “The Running of the Jew” and the naked hotel fight. Cohen’s situations are set-ups but their goal is deeper than a “gotcha” and a pie in the face. The spectacle’s enough, and he’s right. If you can get a decent crowd of Americans during the pandemic to sing along to a song wishing death on Democrats and Barack Obama, and you’re able to film it, you’ve done your job. Borat Subsequent Moviefilm isn’t just a fun and accessible comedy for everyone (I mean that sincerely), it’s a dark historical document full of fear, rage, and latent violence.

It’s, at times, an immensely sad film, as when Borat meets up with a couple of “DON’T TREAD ON ME” guys that are into QAnon. Cohen obviously eggs them on, but the meat of these scenes is not in smug satisfaction. Look at the way the cameras push in on the guy with the thin red hair and the mustache: this is a face of devastation, of complete dejection and disenfranchisement, a body waiting to die. When he explains the concept of “adrenochrome” to Borat—when people like Hillary Clinton “drain and drink the adrenaline in the blood of infants”—one doesn’t laugh. He’s completely earnest, and when Borat suggests that his daughter has been kidnapped and traffic, these guys are on it, alarmed and genuinely excited to do their part.

It’s a horrifying and true scene of modern America—there are no jokes in that cabin. Borat may be pestering these men, but it’s not the focus. Cohen himself may behave like a treacly and ineffectual liberal, but the Borat character is so outrageous and frankly impossible to sanitize or “make woke”—as a result, Borat Subsequent Moviefilm is by far the best American political film of the year, and certainly the funniest. It’s a different kind of “documentary” than the stuff Alex Gibney makes, but while Gibney’s great, he’s a serious documentarian who’s never going to get the cumulative publicity and reach of a hybrid docu-comedy like Borat Subsequent Moviefilm. Thank God Borat wasn’t castrated in captivity in Kazakhstan: despite the tacked on “NOW VOTE” message, this movie is a refreshing blast of anarchic comedy with the most dynamic material on Earth: Americans in 2020. May the Running of the American begin!