For comic book legend Stan Lee, it might be time for trifocals. 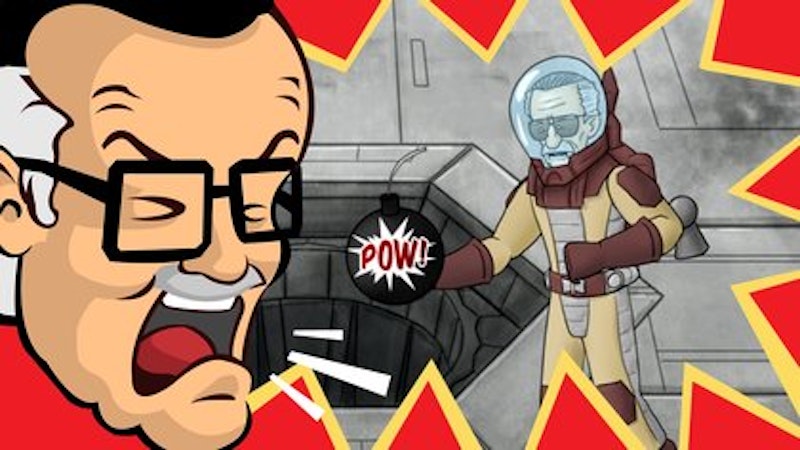 Pretty much everyone knows the name Stan Lee. He’s one of comics’ great success stories, the co-creator of superheroes like Spider-Man, the Fantastic Four, and a litany of others. Stan “The Man” hasn’t been writing comics for years, but he can still make a nice living from his share of the TV and movie rights to his most famous characters. He made $10 million some years back as part of a settlement with Marvel, too.

More specifically, Stan is sitting prettily behind his desk, where he records short videos for his YouTube channel World of Heroes. Most of the videos are in the series Stan’s Rants, which are exactly what they sound like—one- to two-minute screeds for or against something. It’s all hyperbolic humor, like everything else Stan writes and says (his dynamic speech patterns make up one of the best branding strategies in modern history), but with a grain of truth. For example, Stan will rail on for women’s rights fiercely—starting with the right to go topless on the beach. Reform begins with us!

But I’m not laughing at Stan’s latest rant, a complaint about “long credits” at the end of movies. The video begins with Lee assuring us he loves action-adventure flicks with lots of special effects as much as the next nonagenarian. These movies naturally have lots of people that work on them behind the scenes to bring the project to fruition. Stan knows this, of course, but it’s such a pain in the neck when they get credit for their work. “[W]hen the film ends,” he fumes, “can’t they just say ‘The End?’ Why do I have to sit for fifteen minutes while extra credits roll? The print is too small to read, and I don’t care who the wardrobe assistant was or who the head bookkeeper was or who arranged for the takeout food. Nobody knows who they are and nobody can read them and nobody cares.”

Let’s get the obvious joke out of the way first: Complaining about how big the font size is in anything, especially movies, is the old-fogiest thing it is possible to do. Time to upgrade to trifocals, Stan!

So if the little people aren’t worth the time it takes for their names to crawl across a screen, who is? According to Stan, “I just want to know who’s the cast, who’s the director, who’s the producer, and if they have a couple of other people they want to mention, fine. But I don’t care who drove the wagon that delivered so-and-so to the set. I don’t care who cooked the meals for the star.” Most of those names are already in the pre-movie credits and are the most well-known people in the movie anyway, but never mind! Now that the movie industry is officially On Notice, he may not go to see movies with long credits anymore, and “you don’t want to keep [him] out, so beware.”

Whether or not anybody cares about movie credits is irrelevant. You’re free to ignore them if you want. That’s why they’re at the end of the movie, rather than plastered across the screen during action sequences. Credits are a small (too small! shrieks Stan) way of thanking everyone who worked diligently to make a film real, no matter how small. You might not care about the bookie, but those spreadsheets had to get balanced. The wardrobe assistant doesn’t seem important until nobody can find Captain America’s backup shield. And that caterer is totally worthless until, you know, the cast and crew get hungry. These people matter, and pretending as though they’re not even worth mentioning is elitism on a legendary scale.

But then again, credits are a running problem with Stan—when The Avengers came out in 2012, writer/artist Jack Kirby’s name was not in the credits, though he co-created most of the core cast (Cap with Joe Simon; Iron Man, Thor, and the Hulk with some help from Stan). When asked about the infamous omission, Stan replied with bewilderment: “I don’t know how to answer that because in what way would his name appear?.... [Y]ou’re talking to the wrong guy because I have nothing to do with the credits on the movies. I’m credited as one of the executive producers because that’s in my contract. But Jack was not an executive producer. So I don’t know what he’d be credited as.”

In that case, maybe it’s not elitism. Maybe Stan Lee just doesn’t think that anyone who isn’t directly in front of the camera (as he is in just about every Marvel Studios movie) or running the show doesn’t “count,” or that there’s a finite amount of space for accolades and everyone else just has to make room. After all, Stan came up through the comics industry in the 1960s, when it was a brand-new concept for writers and artists to even have their names on their books at all. Perhaps he just doesn’t think credits are ever important—unless it’s a case of “The Man” not getting credit for something. Now that would really be something to rant about.