Don't Move in Next Door to Neighbors

Zac Efron is the only reason to make time for director Nicholas Stoller’s comedy. 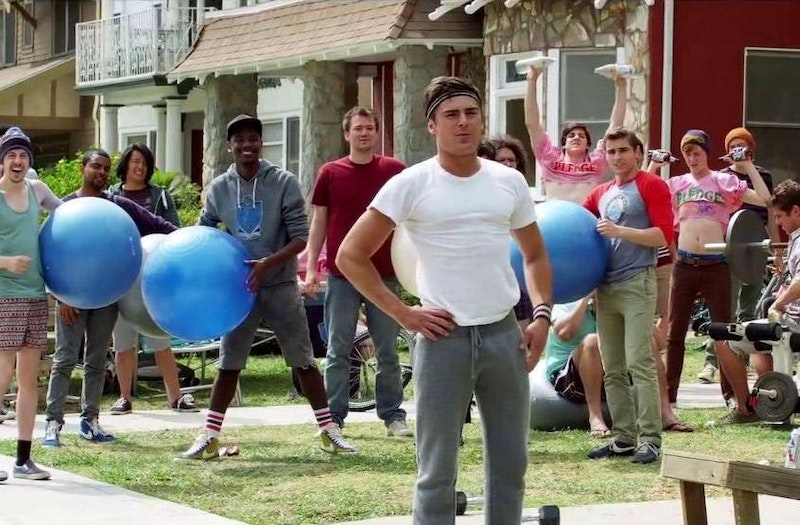 Have you ever watched a movie and, halfway through, wished it was over? Not necessarily because that movie is terrible, but because you know or think you know where it’s headed—you get it—and you just want to go home and read a book or suck down a beer or stare at the walls? Since I started watching movies on a semi-regular basis again last fall, this has happened a number of times: first with The Wolf of Wall Street, then The Dallas Buyers Club, and now Neighbors. Yeah, okay: 1980s Wall Street dudes are assholes; 1980s Texas residents are homophobes; Seth Rogen is hopelessly fucking insufferable.

Neighbors is a comedy about a fraternity that moves next door to a family with a small child, the family itself, and a hailstorm of ancillary characters and pop-culture references. You knew that already, because you saw the trailer, which is all you need to watch. So this movie is post-Apatow comedy lite—meaning that it’s funny enough, exhaustingly frantic and self-aware, loopy on a level beyond cartoon even as it endeavors to wring significance from a clash of generations. Thirtysomethings and twentysomethings come to agreement about frat party volume; thirtysomethings justifiably break agreement with twentysomethings; all hell breaks loose.

This is fun for a while, in a cheap way—airbags exploding in inappropriate places, the frat’s dildo fundraiser, some palaver based on the separation between Michael Keaton’s Batman and Christian Bale’s—but mid-way through, the novelty gives way to a restless mean-spiritedness on the part of Rogen’s bearish schlub and Rose Byrne’s mama-bear raptor. We’re supposed to be rooting against the frat dudes, aren’t we? We’re supposed to be on the side of maturity and experience and breeding—except that the breeders keep the punking up far beyond the point of no return. Suddenly they’re yuppies slumming as clued-in olds bullying college kids because they’re bored with themselves, and we get bored with them—the kind of losers who dabble in careless youth culture and photograph their two year old in various entertainment guises for a calendar.

Rogen is, well, Rogen; Byrne is interestingly manic; James Franco’s brother has a bright future ahead, probably in more movies like this one. But the real revelation here is Zac Efron, embodying and somehow humanizing the platonic ideal of the Junior Alpha Male as a Van Wilder-esque frat president who refuses to think beyond the next beer bash until it’s way, way too late. It’s an inspired, raw portrayal, and pretty much the only reason to sit through an abbreviated, advertising-littered version of this thing whenever it starts running on cable.