On the hiccupping, first-person-shooter thrills of Edge of Tomorrow. 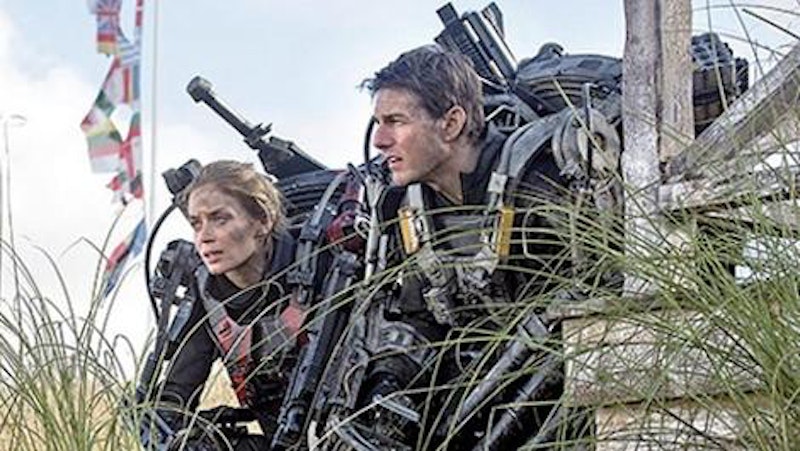 The biggest underlying running joke in Edge of Tomorrow, director Doug Liman’s sci-fi flick, is that it should probably be roughly 400 times longer than its relatively economical 113-minute running time. I busted up laughing every time Tom Cruise told Emily Blunt something like “We’ve never gotten this far before,” or “Every time you start the helicopter you wind up dead before you can really get airborne” or something tellingly indicative of how fucked up it is to die, over and over again, forced to relive the worst day of your life ad infinitum.

By now, you probably know that Edge of Tomorrow is a sort of sci-fi Groundhog Day. It’s the present, or the future, or something—early BBC footage in the film shows Hillary Clinton conferring importantly with dudes, so let’s assume she won the 2016 presidential election—and mankind’s been battling terrifying alien creatures called Mimics for five years. The decimation of Europe has forced the world’s nations and band together for survival. Cruise and Blunt co-star as a wimpy military publicist with a major’s rank and a Lora Croft-cum-Bubblegum Crash icon, respectively.

Cruise’s Maj. William Cage is thrust into a climactic battle with a bunch of fuck-up grunts and, as roundly predicted by everyone, dies pretty much immediately. Trouble is, he wakes up again, with a start, at the beginning of the same day, to the unflappable malarkey of Master Sergeant Farrell—Bill Paxton, having more fun than anyone should be allowed to in a movie about demonic aliens, a la Brad Pitt in Inglorious Basterds—only to be strapped into an armored exoskeleton (again), loaded onto a deploying plane (again), and hurled into the maw of a battle against aliens that register as a cross between massive, land-based squids, the T-2000, and the Sentinels from X-Men: Days of Future Past. As with any video game worth its salt, Cage dies and dies and dies his way, ever closer to figuring out how to vanquish these interplanetary foes and how to save the world with the help of Blunt’s steely Sergeant Rita Vrataski, who’d previously lived through the same temporary grind Cage now finds himself mired in, and mired in, and mired in.

Countless reviewers have drawn a connection between Edge and video games, noting that Cage’s continuing uptick in confidence and experience mirrors that of a Legend of Zelda or Sonic the Hedgehog player over time. I’m certainly in agreement, but relished what might be a sort of creeping, anti-YOLO nonchalance about death and dying, as Cage—while dedicated to the cause of exterminating the mimic race—grows accustomed to and comfortable within the surrealism of his circumstance. There’s dark humor in the idea that Cage eventually knows everything that’s going to happen that day, every word that will be said, every stray happenstance, and it’s fun to amuse yourself with the idea that maybe once or twice or 20 times while en route to the finale I won’t spoil for you, Cage blew off the war for a less perilous corner of Europe to indulge in coke and hookers or treat himself to a latte or a colonic because, well, why not? One might also connect this theme to the lack of variability of most day-to-day life, where while events may differ, the reactions of the people we see and work with every day are predictable, expected, pat.

Edge of Tomorrow isn’t going to any win awards for acting, direction, art direction, or originality; most aspects of this movie felt ripped off from movies I’ve seen and trailers for movies I didn’t. Cruise has made better movies this century—the Mission: Impossible sequels, Tropic Thunder, plus Jack Reacher—yet everything felt fresh, light on its feet, and self-aware in the best possible way without verging into self-parody or mania. The only way this thing could be ruined: if they succumbed to a sequel.