Dust in the Wind

What happens when a self-consciously “cult” film is just a snooze? 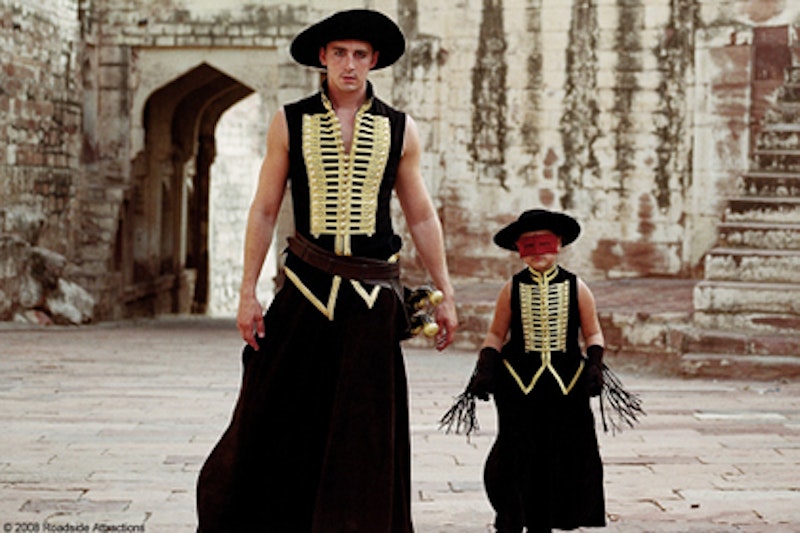 Given all the hoopla and buildup surrounding Tarsem Singh’s “new” feature The Fall, I was shocked to find that, of all things, it’s mainly boring. This is a movie that was, at the very least, supposed to induce fervent opinions. It seemed destined for the annals of Colossal Celluloid Stunts in the tradition of Herzog’s Fitzacarraldo, Gilliam’s Brazil, or Hughes’ Hell’s Angels—the products of madmen directors set loose with no concern for budget or the safety of others, tirelessly chasing a vision to make The Wildest Movie Ever. Or maybe Singh (he goes only by Tarsem, but I’m not biting) was going for a spot in an alternate canon, that of the Bold Visual Innovations like Kubrick’s 2001 or Fellini’s 8 ½, movies that showed audiences something genuinely new. But Singh is no real madman or innovator, and his movie isn’t the kind of project we have to see purely “because it is there,” to quote Roger Ebert’s puzzling judgment. It has some fun moments, a couple of truly awesome shots, and a whole lot of dramatic tedium.

The Fall screened in Toronto in 2005, but Singh had trouble finding a distributor in the meantime. This only furthered his film’s reputation as anti-commercial (read: too mind-blowing for the studio squares, man), as did the rumors that he shot it over nearly a decade and in two-dozen countries. This was more a pragmatic than artistic decision, however; Singh is a commercial and music video director, and he shot wherever his employers sent him. Give the man credit for persistence, but that claim to worldliness has little bearing on the movie itself, which looks like it was shot in two or three different soundstages. And don't overstate Singh's boldness or storytelling panache; the studios surely balked because The Fall’s tone is inconsistent and its audience is never clear.

Set in an early 20th-century Los Angeles hospital, the movie stars six-year-old Catinca Untaru as Alexandria, an Indian girl who broke her arm falling out of her parents’ orange tree. She befriends suicidal Hollywood stuntman Roy (Lee Pace), who lies immobile with broken legs and pines for his old girlfriend. Roy realizes he can trick Alexandria into stealing a bottle of morphine if he keeps telling her fun stories, so he invents a tall tale of revenge starring five ethnic stereotypes (one of which, for whatever reason, is Charles Darwin) searching for the elusive villain Governor Odious. The whole film is presented through Alexandria’s point of view, and her perception of Roy’s swashbuckling yarn is the basis for the self-consciously extravagant visuals that are Singh’s whole point here. Too bad they amount to only half of the film itself, and the rest is given over to Roy’s booze- and pill-swilling misery and Alexandria’s cute broken-English responses.

To be fair, there are indeed a number of arresting images in this film. A swimming elephant, for one, and an incredible slow fade from a villain’s twisted smile into a desert scene—everyone will have their individual favorites. Singh isn’t without talent as a visual stylist, he’s just way over the top; presumably he aims for Kenneth Anger’s hallucinatory sandscapes like Lucifer Rising, but his movie looks more like a prog rock album cover come to life. Every movement in these dream sequences is shot in very subtle slow motion reminiscent of Michael Bay, the better to make it more epic, I suppose, but then he undercuts it all with cutesy meta-voiceover a la The Princess Bride. The eventual interplay between fantasy and reality is about as profound as The Wizard of Oz, only Singh’s fetish for splattering blood ensures that this will never reach the young audience that its perspective and tone call out for. I can’t think of any kids’ movies that contain this much hopeless weeping or painkiller addiction.

That disconnect between message and tone will secure the film a very small audience (Stoner fantasy geeks who want buckets of blood but no profanity? Special effects nerds who love excessive melodrama but couldn’t care less about actual storytelling?), and as such, The Fall has “cult movie” written all over it, almost manipulatively so. What’s annoying, then, is how damn boring it is. If you’re going to throw a bunch of images-for-images’-sake together and connect them with a hackneyed frame story conceit, the least you can do is keep it all moving. Singh alludes to what could have been interesting points—Alexandria has never seen a movie before, so her fantasies are supposedly pre-cinema—but nothing really comes of them. Cult movies generally have quotable dialogue or genuine shocks, and The Fall has neither. It feels like a talented but shallow director deliberately set out to make a divisive head-trip of a film and instead made something that could only elicit, at best, a Keanu-style “Whoa.”

Is The Fall a bad film? I can’t say so in good conscious, if only because its director obviously cares about the cinema and seems genuinely interested in creating a new visual language. But I’m also not convinced that Singh’s hodgepodge of Dalí, Storm Thorgerson, and John Woo constitutes anything new. He claims to have used almost no digital effects in the movie, which is neither here nor there since so much of it looks fake anyway. Singh may be a visionary, but he’s no artist, and The Fall is more an expensive sketchbook than a movie.