Dr. Seuss and the Origins of The Simpsons

How many times must Matt Groening have watched The 5000 Fingers of Dr. T? 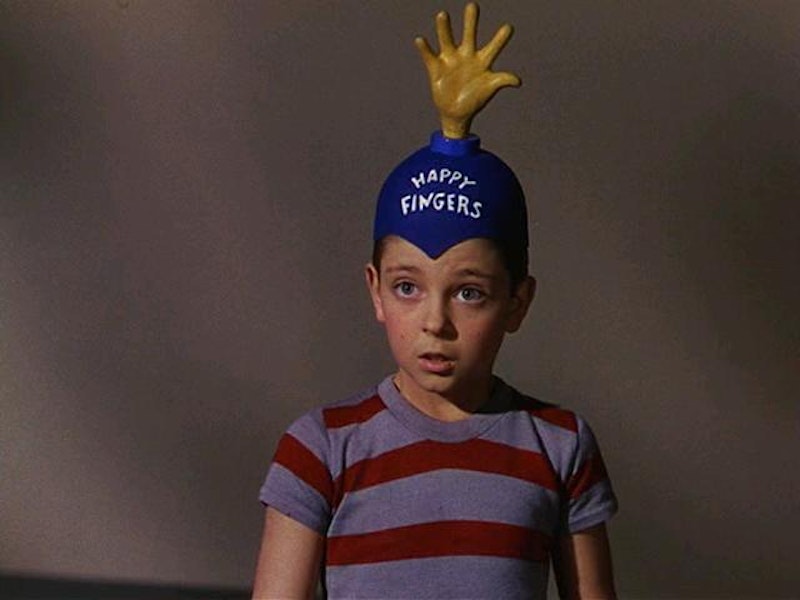 Last week, at the suggestion of Jonathan Rosenbaum on his must-read blog, I watched the 1953 curio The 5000 Fingers of Dr. T, perhaps best known as the only live-action feature from the mind of Dr. Seuss. The film, produced after Seuss' earlier cinematic success with documentaries like Design for Death but years before his breakout success with The Cat In the Hat, Green Eggs and Ham, or How the Grinch Stole Christmas, is ostensibly a children's musical, and the involvement of legendary producer/director Stanley Kramer makes it clear that the studio, Columbia Pictures, thought they were investing in a bankable film. Yet Seuss, who wrote the screenplay, story, and most of the song lyrics, created a nightmarish, claustrophobic fantasy ripe with unsettling WWII undertones and overt references to the era's nuclear anxieties. The film's strange balance of gigantic, elaborate Technicolor scenery and generally small dramatic scale (the entire story involves four characters and takes place in one building) only heightens our uneasiness.

Bart Collins (Tommy Reitig, a little boy who looks uncannily like the Seussian pre-adolescents in Grinch or McElligot's Pool) is a ten-year-old whose mother forces him to take piano lessons with the villainous Dr. Terwilliker (played by Baltimore native Hans Conreid). After a brief expository opening scene—where we learn that Bart's father has died and his mother wishes that the plumber, Mr. Zabladowski, would provide a little male guidance to the boy—Bart falls asleep at the piano, and the rest of the movie, like a boy's version of The Wizard of Oz or the 1951 Disney Alice in Wonderland, plays out in his dreams. Here, Dr. T runs a musical institute for young boys, where he's busy constructing a gigantic two-tiered piano where he will soon force 500 boys to simultaneously play his song "Ten Happy Fingers" ad nauseum. He's also holding Bart's mother, Heloise, under a spell, and employing Zadbladowksi as the institute's plumber. The campus itself is recognizably Seussian and dreamlike, although with a distinct influence of German Expressionist films like The Cabinet of Dr. Caligari.

5000 Fingers may be too dark and slow for younger children to enjoy, though a number of hilarious song-and-dance numbers enliven the proceedings throughout. There are also innumerable insinutations of still-fresh Nazi terror, from Dr. T's goosesteps (contrasted by Zabladowski's literally blue-collar earthiness) to the scene when hundreds of boys are signed in to the institute and herded through to the site of their ceaseless labor. Bart's final rebellion against Dr. T, "Music-Fix," is an invention that sucks sound from the air, though it eventually "turns atomic" and explodes the entire institute, including the boys inside, whereupon his nightmare ends. Children from later generations may not relate to the film's nuclear fears, just as kids in 1953 (and 1958, when the film was rereleased as Crazy Music) might have found it a little much to handle.

Naturally, 5000 Fingers has acquired a modest cult following since its initial release and commercial failure, though it's still under-seen, particularly since its influence on the foremost pop culture success of the last 20 years is undeniable. As Bart's name implies, The Simpsons abounds with references to Seuss' musical, including the boy's preferred toy: a slingshot. At the Dr. T institute, all the boys are made to wear the signature hat, with an open palm and fingers that stick straight up, not unlike the Simpson children's unique hair.

Dr. Terwilliker also seems plainly an influence on the character of Mr. Burns, from his fey, gesticulating hands to his exaggerated Mid-Atlanic accent. This all seemed like pretty benign stuff to me until about two-thirds of the way through 5000 Fingers, when Dr. T suddenly explodes into song, a dark ditty about his wardrobe called "Do-Mi-Do Duds":

The punning turns of phrase, swooshing closet doors, and sprightly evil of this number make it a nearly note-for-note forebear to one of The Simpsons' best-known musical highlights:

Not convinced? Consider the full name of Bart Simpson's nemesis, another villain with impeccable diction, a vaguely European accent, and a penchant for musical theater: Robert Underdunk Terwilliger.