Julie Should Be More Child-like

Nora Ephron’s biography of Julia Child is delightful, so why does she serve it with a boring movie about blogs? (Grade: C) 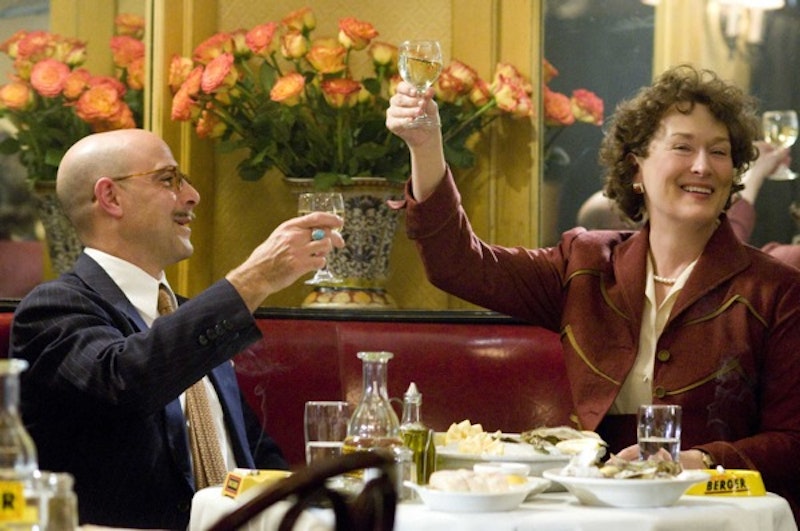 Julie & Julia passes the first test of any food movie: I left hungry. Particularly since the current American conception of “gourmet” tends toward Asian foods, Julia Child’s beloved French cuisine seems positively decadent onscreen. There are endless shots of beef bourguignon, sauce reductions, chocolate tarts, and sizzling butter. We can tell Ephron loves food, and the movie’s very often quite fun as a result, particularly if you’re any kind of home chef.

Sadly, Ephron also still loves all her usual hobbyhorses, and they drag down the non-Child portions of her film. Meryl Streep plays Child, in a performance that edges ever-so-close to celebrity impersonation but is ultimately redeemed by her lovely rapport with husband Paul, played by the great, underrated Stanley Tucci (whose Big Night is a better food film). Beginning with their 1949 arrival in France, the film traces her pre-fame cooking career, which begins humbly when, as a bored housewife, she tries out different classes in Paris. She drops hat-making and follows her love of food to the stuffy, all male Le Cordon Bleu school, where by sheer effort she eventually out-chops her colleagues despite their skepticism. The Julia parts of Julie & Julia are superficially drawn, but entirely enjoyable. Everyone’s clearly having a wonderful time, and Streep and Tucci are the rare portrait of a happy, loving marriage despite their small emotional setbacks.

And then there are the Julie sections, about Queens-based food blogger Julie Powell, who in 2002 began a personal project to cook all 524 recipes of Julia Child’s Mastering the Art of French Cooking in 365 days. Ephron intercuts these stories and they play out nearly simultaneously, not unlike the various plotlines of that earlier, whinier Streep vehicle, The Hours. The occasional similarities between the women’s story lines make this trifling structural gambit seem way more interesting than it actually is; Child’s story is that of a middle-aged woman, displaced socially and geographically, whose love of food brings her a greater understanding of herself and a deeper appreciation for her supportive husband, whereas Powell’s is just a typical trifling Ephronanity about a close-minded liberal New York woman whose life becomes tolerable only once she becomes famous. Ephron’s overlapping method unfairly equates these women’s accomplishments and even cheapens Child’s story, making the quiet, celebratory story of her growing self-expression seem like the mere prelude to her Smithsonian-enshrined fame. This is the Ephron way.

Powell is played by Amy Adams, an actress who, after gaining attention with great roles in two extraordinary films, Catch Me If You Can and Junebug, hasn’t yet found a script that balances her comic and dramatic talents as those performances allowed. Julie & Julia might be her worst, most confining role to date. Stuck with a nearly punitive Meg Ryan haircut, she gets saddled with the worst bits of Ephron’s style, playing a harried, self-serious woman surrounded by crude stock types: her friends are all either shameless Manhattan go-getters or overly sympathetic confidantes, her mom is a worrisome conservative Texan heard only over the phone (Ephron's disdain for non-Manhattanites rivals Woody Allen's), and her husband Eric (Chris Messina) is a characterless, non-threateningly handsome boob whose main talent seems to be giving pep talks. Their relationship is as boring and clunky as Julia and Paul’s is affecting and human, and their second-act romantic troubles arrive and vanish so perfunctorily that you wonder how the same writer and director was able to depict the older couple’s unrequited desire for children with such grace.

Worst of all, Powell’s storyline means that a great, expressive actor like Adams is forced to do much of her line reading in voiceover as her character types, a la Ephron’s earlier You’ve Got Mail. Like that movie (a shallow but nice enough retelling of Ernst Lubitsch’s outstanding The Shop Around the Corner), Julie & Julia’s contemporary sequences are the story of an unsatisfied woman finding solace in a trendy (and product-placement-friendly) technology, and Ephron’s not savvy enough to make this seem anything but craven. So we get lines like “That’s what’s so great about blogs!” and multiple explanations of what blogs are, exactly. Everything’s cute to a fault, particularly the awful music, and all the men are either authority figures, like Powell’s faceless boss at the Lower Manhattan Developing Corporation, or cuddly jokesters like Eric who are always up for telling the joyless protagonist how she’s really great, seriously, don’t worry about what other people say.

I admire the way Ephron so blatantly does away with any semblance of legitimate male perspective in this film—at one point, a female character looks at Eric and says, “Who’s talking about men?”—but that shouldn’t have to mean that her contemporary story is so relentlessly superficial. Her liberal New Yorker parochialism also sours her female concerns; her movies aren’t about “women” in any inclusive sense, just about upper-middle class urbane women with Republican-hatred and occasional breakdowns. Which is why Streep’s Child, for all the characterization’s broadness, seems more human than Adams’ Powell—she at least shows Ephron attempting something beyond her own experience and time. Julie & Julia ultimately sinks, however, because of Ephron’s insistence that Child’s greatness lies in her ability to inspire a cutout Nora Ephron character. It’s a delicious boned duck stuffed with week-old Whole Foods egg salad.