District 9 manages to be both ridiculous and boring. (Grade: C-) 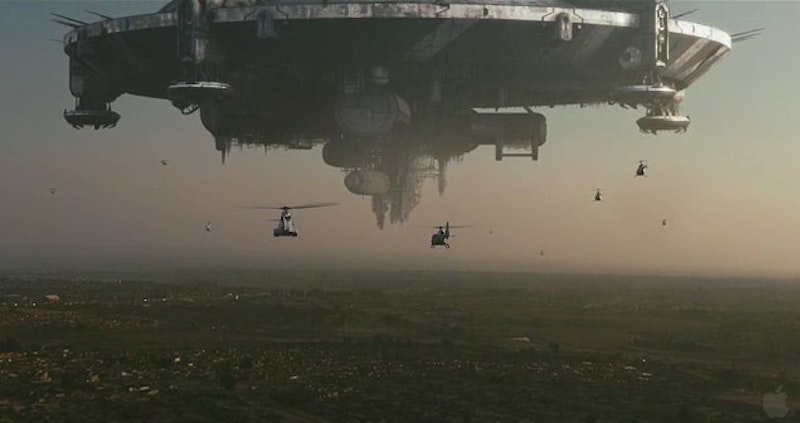 Plenty of movies have been based on video games, many more have been released alongside gaming tie-ins, and others, like The Godfather, have even been regurgitated as pixels years after their release. But District 9, which will ooze like spilled Mountain Dew into theaters everywhere this Friday, might be the first movie I’ve seen that explicitly aspires to be a video game. From the seemingly endless opening sequence—a poorly done mixed-media boondoggle that makes no narrative or structural sense—we’re in the presence of a filmmaker, Neill Blomkamp, who, by all appearances draws his greatest inspiration from the kind of pumped-up fake documentary montages that open military games like Command & Conquer. (I’m aware I’m dating myself.) Surprise, surprise, District 9 came about when Blomkamp’s earlier project, a movie version of Halo, fell through.

Were this newer idea merely uncreative, it’d be of no interest or value as a discussion point. But District 9 was funded and shepherded through production by Peter Jackson, Oscar-winning director of the Lord of the Rings trilogy, and will also arrive in theaters cresting a wave of viral advertising. (You may have recently stared with confusion at a bus stop ad bearing District 9’s scuffed biohazard font.) Coupled with the movie’s very superficial depiction of apartheid struggles, this marketing bonanza may convince some people that District 9 is politically important or relevant, but it’s really just another summer piffle with an unearned sense of pretentiousness for its schlocky origins.

The plot is very simple, though you wouldn’t know it from Blomkamp’s unnecessary mockumentary jumble at the beginning. A large alien spaceship, blandly designed to look like any such vessel from the last 25 years of sci-fi movies, comes to loom above Johannesburg, prompting the military to go up and cut it open. They discover a race of aliens—creatures that look like a mixture of and shrimp, or maybe just the Predator’s junky cousins—living in squalor and desperate to go home. The beasts, unaffectionately called “prawns” by humans, are removed from the ship and placed in a shantytown adjacent to the city. The years go by, hatred between humans and prawns grows, and soon a South Africa-based multinational corporation called (you can almost see the writers shrugging) Multi-National United decides it’s time to round up the creatures and forcibly relocate them to a more rural location.

Leading the administrative end of this effort from is Wikus Van De Merwe, an office-bound twit who, as is repeatedly foreshadowed in the opening cacophony, barely makes it out of the relocation alive. He gets covered in some alien goo and soon the movie goes from merely disorienting and silly to preposterous. Blomkamp unceremoniously drops the documentary schtick and resorts to summer movie convention: chases, glowering villains, ludicrous dialog, and even a cutesy little baby prawn as a minor character.

Blomkamp, who also directed, has a few good ideas and some legitimate panache—the alien race is decidedly not of higher intelligence, and the effects generally blend in with the scenery. But his script is absurd and his aesthetic sense is unhinged; he wants to make us think, but his movie feels thoughtless. Why the fake news reports and security camera footage, other than to add a hearty sprinkle of audience-baiting paranoia? The original Day The Earth Stood Still was far creepier than Blomkamp’s Blade Runner-styled spaceship, largely because everyone just gathered around it, hesitant and quietly scared. Blomkamp throws every piece of media at us—other than film, tellingly—just to make us scared of something that should be inherently frightening.

Likewise, we’re supposed to sympathize with the social metaphor of alien mistreatment, but Blomkamp simultaneously indulges a ludicrous depiction of conniving Nigerian weapons traders that’s as Sambo-worthy as anything you’ll see in a mainstream 21st-century film. He wants us to care about how races exploit one another, but not before we ogle the voodoo-practicing cannibal race that Wikus has to outrun.

Despite its wanton gore and unbelievably profane script—entire scenes go by where people literally just scream “fuck!” at one another—District 9 feels nearly embarrassed to be a movie. For all its art direction and sprawling African setting, there’s never any sense of space or scale; Blomkamp’s too busy trying to make us feel like we’re watching TV. It’s the opposite of Peter Greenaway’s incredible, disorienting media jumbles like Edvard Munch or The War Game, which were produced for television but feel urgent and spectacular like all good movies do. It makes me yearn for a Halo movie, which would at least be an honest gesture.