No revisionism here—The Duchess is a down-the-middle period piece, but an affecting one nevertheless. 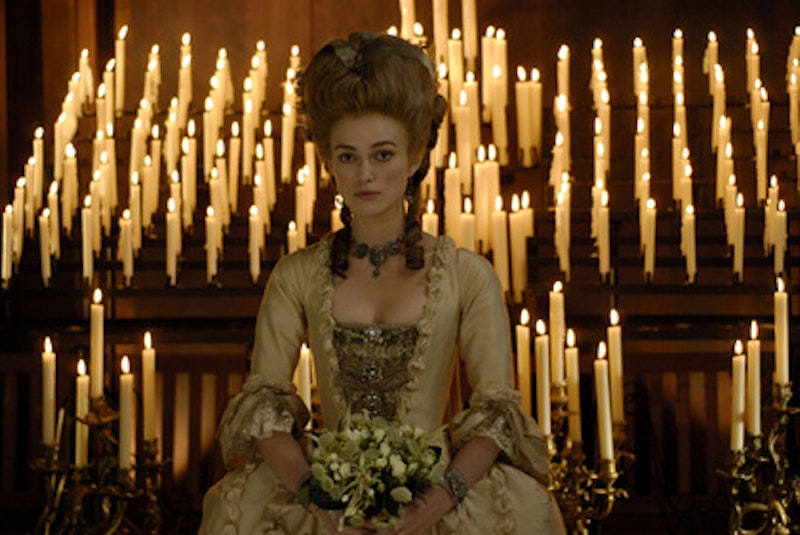 Think of Saul Dibb’s new feature The Duchess—based on the life of Georgiana, the Duchess of Devonshire—as the necessary response to Sofia Coppola’s noble failure Marie Antoinette from 2006. Coppola tried to marry typical period-piece beauty to a postmodern pastiche sensibility using contemporary pop music in service of historical revisionism; Dibb traverses similarly feminist terrain, but he really just wants you to enjoy the parade of wigs, Whigs, corsets, jerkins, and candelabras as much as he obviously did. He never quite does enough with the material to make his movie as affecting or resonant as the best costume dramas, but it’s full of game performances, requisitely sumptuous camera work, and able storytelling.

Keira Knightley plays Georgiana, who at the film’s beginning is whisked away before her 17th birthday to marry the Duke (Ralph Fiennes) under the two conditions that she remain faithful to him and that she produce a male heir. Their main castle is an architectural wonder, but Georgiana’s awe soon wears off when it becomes clear that the Duke has little interest in her besides her child-rearing capabilities. When after six years they have only two daughters and two stillborn sons, their marriage is a joyless sham and acknowledged as such among London’s ever-present social and political circles. Throughout, the Duke remains an insatiable pussyhound who demeans Georgiana through frequent infidelity; when Georgiana’s old love interest Charles Grey (Dominic Cooper) shows up, the seeds are sown for bodice-ripping personal intrigue.

Dibb’s movie skips hurriedly through time, giving The Duchess an appropriately novelistic scope without sacrificing narrative economy. Basically every scene serves an immediate storytelling purpose, either to introduce a character or reveal a plot twist or document a pivotal conversation. Lest that seem to be faint praise, I’ll merely reiterate how distressingly rare this kind of filmmaking is nowadays. The Duchess is a sturdy, well-made movie that places its considerable art direction in the service of its human story. Dibb even allows his camera to sit still for stretches, particularly in Georgiana’s emotive moments, where Knightley shows herself to be a talented actress in addition to a usefully waifish magazine fashion model.

Fiennes has always been better as a villain than a romantic leading man (apologies to those who prefer Maid in Manhattan to Schindler’s List) thanks to his serpentine looks and menacingly prim voice, both of which he puts to good use here as a man who remains steadfastly uninterested in actual human closeness. He’s bored to tears by political speeches (not the politics, “just the rhetoric”), totally unresponsive to non-male children, and addicted to sex despite deriving no visible happiness from it. He’s aware that the law bends entirely in his favor, and takes advantage of that reality more out of entitlement than willful villainy.

More supporting characters come and go throughout the proceedings, namely Bess Foster (Hayley Atwell) who befriends Georgiana before bedding the Duke and subsequently playing third wheel in one of more bizarre royal marriage arrangements of the 18th century. As future Prime Minister Grey, Dominic Cooper strikes a believable balance between political confidence and personal desperation. The script is as well paced as the cinematography, and full of dry wit.

And yet, The Duchess somehow remains merely good. This movie is exactly the sum of its parts—good acting, fine writing, typically ornate art direction, with a little hot ‘n’ steamy barely-repressed sexuality thrown in for good measure. And that’s it, really. If you’re into ballrooms and chandeliers, towering fake hair and globular bustle dresses, then The Duchess will provide you with an enjoyable, occasionally quite pretty, two hours. But it’s neither sexy, aesthetically breathtaking, technically unique, or dramatically riveting enough to transcend its genre, and it doesn’t adequately transpose current social realities on to old imagery in order to reassess human struggle.

The Duchess is fairly frank in its depiction of sex (reproduction, really) as a business and political bargaining tool in monarchical England, but it also pales in that comparison to Peter Greenaway’s investigation of it in The Draughtman’s Contract. It’s also neither a repositioning of contemporary political mentalities like Elizabeth, nor a new canvas on which an auteur can paint his cardinal themes, like Kubrick’s Barry Lyndon or Scorsese’s The Age of Innocence. And if you’re looking for truly exquisite costuming, jewelry, and art direction, then Greenaway and those latter two are also more impressive, as are Milos Forman’s Amadeus and Max Ophuls’ classic The Earrings of Madame de…, which has just been issued on DVD by Criterion.

No period piece aficionados are going to be disappointed by the pageantry and artistry of The Duchess—and let’s just be honest and say that this kind of thing plays better in England, where multi-episode period literary adaptations are regular television events. Viewers and film buffs looking for something truly staggering, however, something that takes advantage of widescreen mossy British landscapes and naturally-lit ballroom galas, would be better off with the classics. It’s hardly an insult to say that Saul Dibb is no Kubrick or Ophuls—who is? But his drama remains too pretty to not be prettier, and too well crafted to not be more universal in its concerns.

The Duchess. Directed by Saul Dibb. BBC Films, 110 minutes, rated PG-13. Now playing in limited release, although it secretly yearns in its heart to be more widely seen than English society permits.