Only the husbands get to indulge their every desire in Mad Men. 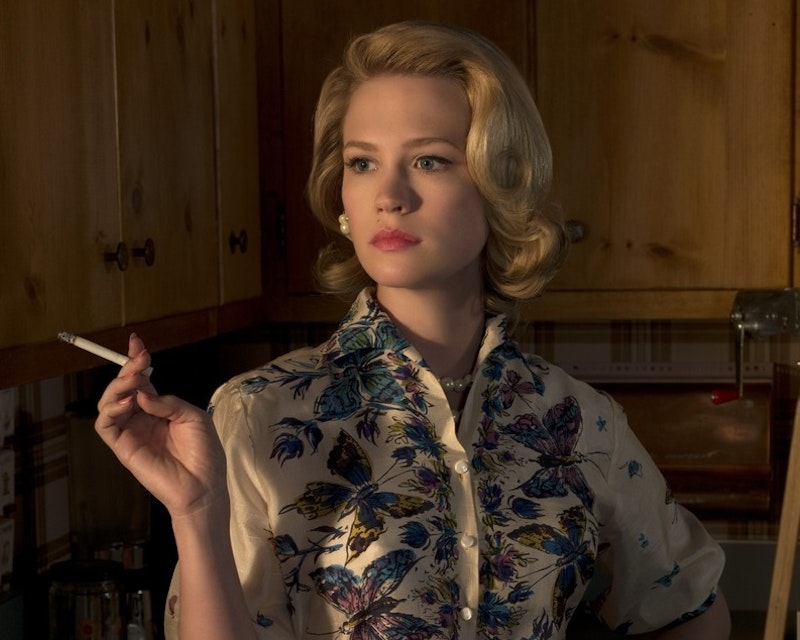 I'm reluctant to add yet another word about the Mad Men franchise, but I can't hold my breath any longer. Why won't Betty Draper just sleep with the Red Hot Henry Francis? What's the tea, grrrrl?

First, I want you to know that I hate almost every character on Mad Men. Pete Campbell looks way too much like Pee-Wee Herman. Ken Cosgrove is cool, but he should have boned That Gay Dude. And don't get me started on Donald Draper, The Worst Person in the History of Television That Real Women Are Actually Obsessed With.

Just when you think Don is going to do the right thing and repress his desire, gotcha! He's back at it again. The strongest thing Betty did when she discovered he had been cheating was to kick him out of the house for a while. Yeah, kick him out of that house! But did he learn? Duh. Men have dicks and, thus, are entitled to come and go they please.

Why can't Betty have what she wants? And don't tell me it's a "women" thing, because other women on the show seem to get what they want: Joan knows how to work the system, and even Peggy had the balls to stand up to her mother and move to Manhattan. And let's not forget about the many and various women who want and get Draper. But what about Betty? When will it be her turn?

Ever since Betty reluctantly had Don's third child (which I so told her not to do), I want to throw my television out the window whenever Don puts his piece in another cooch. So after last night's episode, I got into a Facebook Tweeting Tiff with a girlfriend about why Betty should just leave Don's lying/cheating/misogynist ass. Bitch should storm into his office and drop the new baby off at his desk. Leave him a note that says, "Here's a token of my appreciation."

My friend Tweets: "Her entire identity is wrapped up with Don's. She's Don's wife. That's all she is."

Gah! But isn't there more to womanhood than being a wife to a man who is sleeping with the entire town? What's the value of marriage if both people are unhappy? Ahhah! Or is that the critique? If I ever found out that my husband or long-term partner had cheated or was cheating, I would be out the door so fast. It's not as much about the sex as it is about the secrets and the lying. Other people might be more inclined to retaliate by cheating for themselves-a revenge fuck. But when Betty had her chance for a revenge fuck, she didn't take it.

If you ask me, Betty is strangely Victorian, and that's what makes her interesting, and it's why she won't leave Don or sleep with Henry Francis. You can read her feelings, but she's prim and proper, never inappropriate, well coiffed, always putting on a performance. Remember when she started a romantic fling by mail? What could be more Victorian than that?

I suppose in many ways Mad Men is about desire and impulse, both repressed and realized. I want what I want when I want it. And in that way, I guess too that it mirrors real people and real situations. But Sal The Resident Gay couldn't pop the bellboy because of a fire (oh symbolism!) and failed to service the big commercial producer; Betty hasn't stooped to her husband's level and bone Henry Francis. People want things but either do or don't pursue them. And those who don't pursue are probably afraid of the consequences of such flighty impulse.

I know I can be ultra impulsive; like, maybe I shouldn't buy that pair of Dior boots and use that $750, instead, to pay my rent. Just a thought! But there's something sexy and addictive about impulsive decisions. There is an exhilaration that wears off, which only makes us want to recreate the feeling. Hence the saying, "I blew my wad on ________."

The thing I'm dying to know is: what do women want from Donald Draper? Not only women on the show, but real life women who are in love this cat. What's it all about?