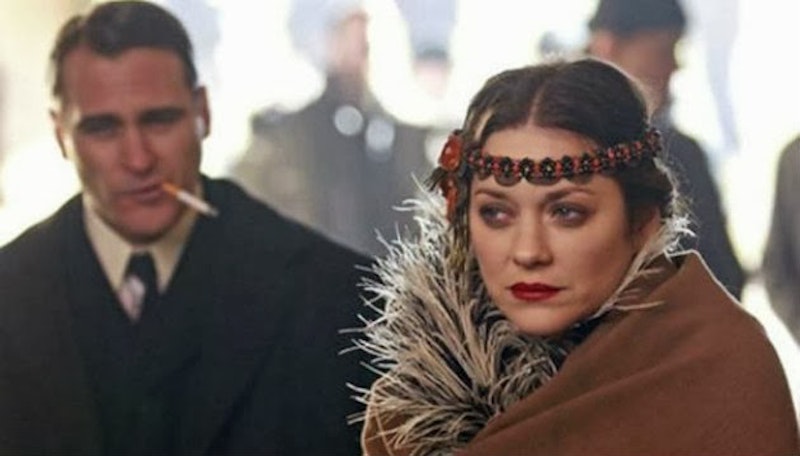 James Gray’s The Immigrant is a reminder of how absorbing period pieces can be and how most either miss the mark or half-ass it. The atmosphere of a movie like The King’s Speech, for example, is closer to the shiny dead sheen of CGI animation than what the world must’ve looked like before air conditioning, advanced electric innovations, and modern sanitation. Period pieces from big studios and small studios always look too clean: the people, streets, clothes and possessions. One of the most striking things about The Immigrant is how much depth the art direction has. We’ve all seen a million tenement houses and New York streets in the 1920s rendered on screen, but the hypnotizing atmosphere of The Immigrant throws into sharp relief how few films succeed in making you feel like you’re watching through a crystal ball instead of a bunch of actors playing house. Everything looks dirty, and the lightning and sepia tones make you think of the 100-year-old buildings you’ve been in and how many people have passed through those crummy halls and doorways.

Marion Cotillard plays the title character, Ewa, a refugee from Poland who just barely makes it through Ellis Island through the help of Bruno (Joaquin Phoenix), a pimp/brothel manager. Bruno immediately falls in love with the sullen and reserved Ewa, who carries the 1000-yard stare of serious PTSD throughout the movie. Early on, she confides in him how she was forced to watch as German soldiers decapitated her parents. Bruno says “I’m so sorry,” and goes in for a hug—Ewa recoils and snaps back “Don’t touch me.” Bruno’s reaction is extremely startling and disturbing—he screams “Shame on you!,” shoving and shaking Ewa, castigating her for refusing the comfort of the man who “saved” her. This is what really gives depth to The Immigrant: it’s a movie about gender roles and what it means to be a man, and how deeply insecure men are about being humiliated, rejected, or passed over by women. Ewa has the strongest will of anyone in the movie. Bruno is a mess and never gets over his unrequited love. His cousin, Orlando the Magician (Jeremy Renner), also falls for Ewa, and his attempts at wooing her by playing the typical “nice guy” angle, and getting upset when he isn’t granted what he believes he’s entitled to (her body), make this melodrama pretty conveniently relevant. Maybe it’s just in the air now due to recent events, but I couldn’t help but scan The Immigrant as partly a mockery of masculinity and how our society is laid out and built upon a foundation of insecurity and desperation.

Gray recently said in an interview, describing his movie, that “We’re all complicit in an extremely disturbing world order,” and suggested against condemning Phoenix and Renner’s characters, along with the rest of the predatory and demeaning male characters as wholly evil or monstrous. They’re a product of their time, “doing what they have to do to survive,” how they know best. Bruno is by no means at the top of the ladder either—even as a white male, he’s called a kike and robbed by the police. Ewa and her fellow burlesque dancers are subject to the constant shouting of “Whore!” and the predatory possessiveness of men who see them as a mere means to an end. That sympathy for misguided characters like Bruno and Orlando is shown in the final scene, where Bruno watches wistfully as Ewa and her sister row away off Ellis Island, in an awe-inspiring split shot of the two sisters through a window in the left, and Bruno watching and walking away in the right. It’s an amazing trick of depth perception and detail that makes you feel—yes!—movie magic. The atmospherics and cinematography of The Immigrant are so beyond any period piece I’ve seen in years, but the focus on the weaknesses and insecurities of “strong” men at every level of society make this movie nourishing instead of just entertaining.