Attack of the Documentary Film

Reassemblage looks at those who look at Senegal. 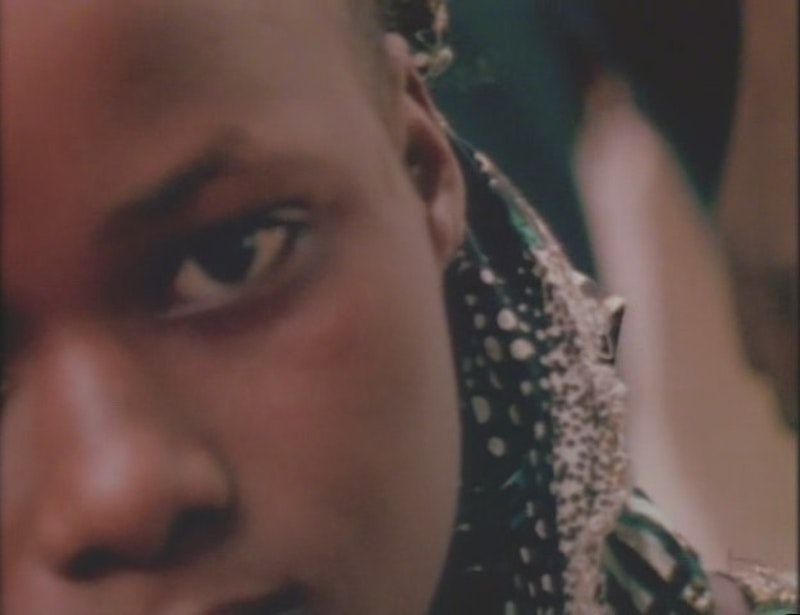 This is the 11th post in a series on women filmmakers. The 10th, about Near Dark, is here.

"I do not intend to speak about. Just speak nearby," Trinh T. Minh-ha declares early in her 40-minute 1983 film Reassemblage. It’s kind of an anti-documentary, composed of footage of people living in Senegal, but lacks the voice-over explanations you'd usually expect while watching a PBS segment about an African nation. Instead of objective information, Minh-ha offers disorientation and mystery. And rather than a Western view of the developing world, the film insists on a different perspective—one in which the anthropologist is spun around as in a game of blind mans' bluff.

Reassemblage starts with a black screen, on which shadows move indistinguishably to the sound of drums and chanting. Soon images appropriate to the ritual sounds fade in—women carrying children or dancing. But the sound cuts out periodically, leaving abrupt silences, in which the viewer is left to contemplate silent figures, walking about their villages with blank noiselessness. Towards the end of the film, in one long silent passage, the camera swoops in on the mouth of a woman who talks directly to the camera; there are words there apparently, but you can't understand them. Often throughout the film, into the silence, Minh-ha speaks over seemingly randomly assembled footage. "Watching her through the lens I watch her becoming me, becoming mine," she says at one point in her Vietnamese accent.

Minh-ha criticizes the tropes of ethnographic film, and ethnography itself, in which people from theoretically primitive or undeveloped countries are turned into catalogued freaks or oddities for the consumption of supposedly more sophisticated audiences and scholars. "Filming in Africa," Minh-ha says, "means for many of us… naked breast women, exotic dances, and fearful rites; the unusual." Reassemblage has some exotic dances, and a lot of breasts, including topless women at work and close-ups of nipples. The breasts throughout the film are basically rubbed in the watcher's face. This is what you expect to see from a documentary about Africa, this is what you're going to be shown—but without the pretense of education to cover your motivations. "Nudity does not reveal the hidden. It is its absence," Minh-ha intones. Who exactly is unhidden, though, she doesn't say.

Minh-ha is not simply undermining the anthropological gaze; she is reversing. What she’s showing is not a true Senegal. Nor is it a fragmentary vision, demonstrating that Senegal, in all its complexity, cannot be captured by an anthropological gaze. Rather, Minh-ha is holding up reflective image of Senegal that is a kind of mirror. The film, for example, shows two albino children, whose skins are about the same shade as those of white people. The children demonstrate that Senegalese, despite preconceptions, are not black. But the white children are also a kind of stand in—a reminder that when white people look at Senegal, what they see is a pale shadow of themselves.

Because she is speaking in English, and is the narrator of a film that looks like an anthropological film, it's easy to associate Minh-ha with the West and the developed world. She seems to be critiquing a profession, or a system that she’s part of. But this is somewhat misleading.

Minh-ha came to the United States in 1970, when she was 18; she currently teaches film and literary theory at Berkeley. But she grew up in Vietnam during the war; at the time the film was released, she’d spent the bulk of her life in Southeast Asia. She's not exactly of the West, and obviously she's not from Senegal either. Instead, she is, as she says, speaking from "near-by"; her gaze is neither Western nor Eastern, but both—a doubled consciousness creating a double vision.

Vietnam is not Senegal, but both were at the time broadly part of what during the Cold War was called the Third World. "Scarcely 20 years were enough to make 2 billion people define themselves as underdeveloped," Minh-ha says at both the beginning and end of the film. The people of Senegal are among those two billion people defined as lesser. So are the Vietnamese. The goal of the ethnographic project, Minh-ha says, is to "first create needs, then help." That has a particular meaning in Africa, where colonization and exploitation have created problems that Western nations promise to solve. And it has a related meaning in Vietnam, where certain problems were diagnosed in order to provide the groundwork for a solution of bombs and napalm.

Minh-ha is certainly aware of the ways in which she’s like the women of Senegal, but she also emphasizes differences. She comments at one point that on one particularly hot day in the village she put on a hat, and the women laughed at her; women in Senegal don't wear hats (or at least the women who Min-ha was filming didn't.) She also recounts a conversation about polygamy. "It is good for men, not for us," one of the Senegalese women says. "We accept it because of circumstances. What about you? Do you have a husband all to yourself?" Minh-ha doesn't say, but the question emphasizes her distance and difference.

Ethnography is based around a binary; there’s the one who looks and the one who is looked at, the knower and the known. Reassemblage complicates that binary by flipping it; in the film, the colonized gaze upon the gaze of the colonizer. But Minh-ha also complicates ethnographic duality by suggesting that there are more than two terms. "Different views from different angles; the ABC of photography," Minh-ha says in her voiceover, as the camera shows a child up close and further away. Reassemblage doesn't just look at the Senegalese from different angles; it also insists that different people may be looking. No one person holds the camera; the Senegalese can stare back at the West. "I am looking through a circle in a circle of looks," Minh-ha says. There's no one spot to set up your camera and observe the objective truth. What you see defines you as much as it defines others. Which is why it's important to give the camera, occasionally, to someone nearby.