Chris Marker’s landmark 1977 film A Grin Without a Cat is finally out on DVD, and it’s a fascinating, if exhausting, look at the triumphs and failures of the 60s and 70s. (Grade: B) 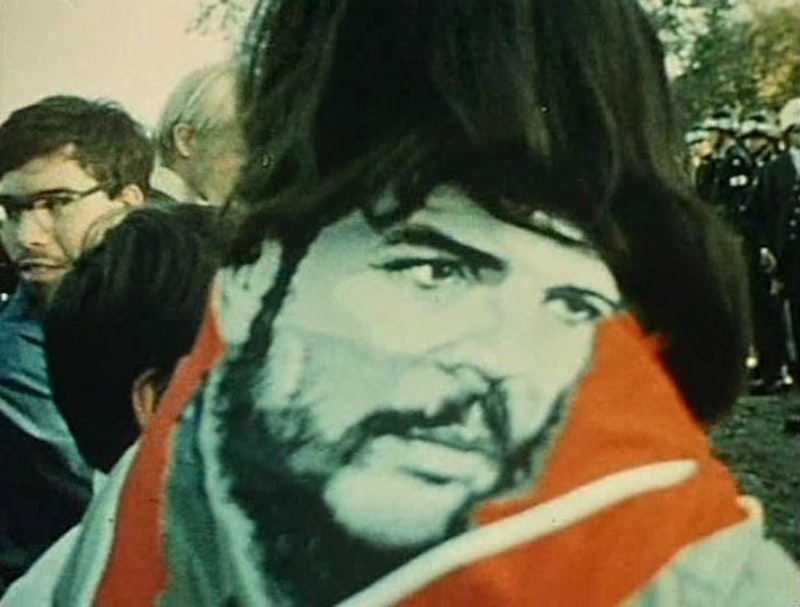 The French filmmaker Chris Marker is perhaps best known for his sci-fi short La Jetee, which was adapted by Terry Gilliam as 12 Monkeys, though the bulk of Marker’s career has been spent as a documentarian. Not that he would entertain such a pedestrian term; rather, Marker’s films, at least according to his boosters and marketers, are “film essays,” which I take to mean he simply jettisons objectivity in favor of explanatory voiceover. Many of his films are expressly political, and Marker is unabashedly leftist and radical, which makes even his most exciting films—particularly 1967’s The Sixth Side of the Pentagon, which details the storming of the Pentagon that appeared in Norman Mailer’s The Armies of the Night—a little overbearing, as if he didn’t trust the power of his incredible footage. At three hours, his two-part 1977 movie A Grin Without a Cat, about the various European, Asian, and pan-American radical political movements of the 1967 to 1975 or so, is both his most incredible feat as an archivist and the best argument for his failings as a filmmaker. While Marker gathers together a truly outstanding compendium of political footage, his unifying point is both too obvious and expressed too heavy-handedly for such a mammoth running time.

A Grin Without a Cat is, however, a fascinating complement to some of the era’s better political films, like Dušan Makavejev’s WR: Mysteries of the Organism, or Costa-Gavras’ Z, both of which detail radical movements with greater humor and insight than Marker’s “essay.” But for anyone else who’s watched those movies and wanted more, Grin is a great place to start. For one, despite his career-long subjectivity, Marker’s film does in fact take the decades’ leftist groups to task; the movie is primarily an act of triage, an attempt to discern why, despite the surplus of emotion, bodies, and effort, attempted revolutions in Bolivia, Japan, Russia, France, Prague, and the United States all fell flat—to understand why, in Jarvis Cocker’s perfectly blunt terms, cunts are still running the world.

Marker’s incredible collection of footage—from Viet Cong waterboarding practice to neo-Nazi rallies in Washington and massive, violent rallies in Tokyo—all adds up to the generally un-profound point that there was no collective mindset behind the individual revolutions, hence A Grin Without a Cat’s title. All the passion in the world, Marker says, can’t overcome an existing military-industrial complex when the leaders of that passion are contradictorily violent, as in Che’s Bolivian campaign, or nearly nonexistent, as in the American case. Marker shows how the Watergate scandal didn’t prompt any youth rallies as the early Vietnam War had, implicitly acknowledging how such rallies are typically the response to immediate threats and thus lack initiative and design beyond simple self-defense and general political opposition.

This point is important, and, as seen from the hagiography on display in Steven Soderbergh’s Che, or the over-romanticized view of antagonistic leftism in a recent film like The Edukators, still necessary. But the same conclusions about existing governments’ monolith-like societal presence are made more convincingly, and excitingly, in Z, or Pater Watkins’ Culloden. A Grin Without a Cat is a fascinating document that nevertheless fails to stir audiences like its fictional counterparts or, in fact, like The Sixth Side of the Pentagon or Marker’s beautiful, horrifying documentary on whale hunting, Three Cheers for the Whale. Marker’s own commentary is present in both those films, though it’s easier to take since they’re so short and thus perhaps in need of a little explanation, but A Grin Without a Cat is entirely different—here Marker has assembled more than enough footage to tell a moving story without his incessant verbal footnotes, and he even brings in professional actors like Jim Broadbent and Yves Montand to speak for him, which irresponsibly makes the filmmaker’s biases seem more omniscient than they are.

Which is of course not to say that Marker’s not entitled to his opinions; Peter Watkins and Errol Morris have made incredibly moving films with an equal amount of political bias on display. But Morris and Watkins also recreate scenes and toy with documentary conventions, whereas Marker’s greatest strength is in his artful editing of primary sources. At this, particularly in A Grin Without a Cat, he excels marvelously, finding human moments inside the narrative of history, like his extended passages of intimate conversation by Fidel Castro. The film is an important feat of research, but one wonders who would bother to watch it other than those who already agree with the director’s motives.