Andy Griffith, His Teeth, and Democracy

Why A Face in the Crowd is such a headache. 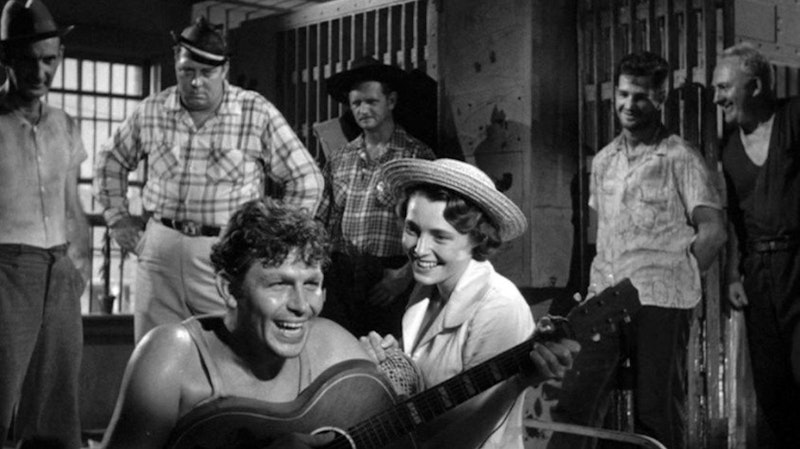 “Just because I got black skin, I ain’t no minstrel, man,” snaps the inmate at the sheriff. Because 1950s liberal scripts, they’re ripe. As in: “Marcia, you know what you are? You’re the locker room where he eases up after the fight, win or lose. You’re the shock absorber for collisions with ex-wives and models and new wives and,” etc. Or, muttered over a mixed drink: “He lives on a diet of nitroglycerine and Trendex ratings. Call it a Bible, but it’s really a death warrant with decimal points.” Or this, flung bitterly: “You're getting to be all the things you used to harpoon.” And this, incanted bitterly: “Betty Lou is your public all wrapped up with young ribbons into one cute little package. She's the logical culmination of the great twentieth-century love affair between Lonesome Rhodes and his mass audience.”

“Young ribbons” seems unlikely, but after several replays I still hear the phrase, and it does fit with the screenplay’s commitment to rhythm and streamlining. “You're the little wheel of efficiency without which the great streamlined express called Lonesome Rhodes plunges off the track and leaps to destruction,” Walter Matthau urges Patricia Neal. Soon Neal’s urging Andy Griffith regarding Lee Remick, the ribbons girl who’s the logical culmination, etc. I don’t say Matthau and Neal urge any particular action. They’re voices of conscience in a liberal drama of the 1950s; it’s hard to tell what they want. Just to explain, I suppose. The person being spoken to should understand what sort of person he or she is, and the speech giver’s going to lay that out for them, at length but quick time and with alliteration, head forward and a bit down, face set, words tumbling, glare fixed someplace near the person getting explained at. The speech giver goes to the end of the metaphor, after which the spoken-to, when he’s Andy Griffith, goes ahead and does whatever.

Griffith stars in A Face in the Crowd, a very important live-action cartoon made when Eisenhower was president. Budd Schulberg wrote it, his typewriter sudsing with verbal froth and high-minded alarm. Elia Kazan directed it, his thumb heavy on whatever device causes everything about a movie to be toomuch. This may be the only film with overloud shadows; the chiaroscuro isn’t just excessive, it’s gross and overbearing. Nothing lets you be: the sculpted compositions of slimy ad menor blue-collar joes, the funky “It’s a hit!” montage about a pseudo-aphrodisiac, the fat noodle of shadow over a banker’s shoulder, Andy Griffith’s abundant, surging teeth. Those may be the worst. “You gotta be loved, man” he says. “Loved.” And the white bumper car jumps forward.

Griffith plays a just-folks genius at audience psychology; he’s found in the town clink by a local radio producer and then rockets to national stardom on TV. Once on top he sells out the folks, the crowds that love him. He throws in with the rich and powerful to sell the people on… But here the going gets thin, noisy but thin, because the script wants to mention fascism but can’t say the necessary words. Not fascism, and not Hitler, Mussolini, Nazism, or brownshirts; and no talk of crushing communism, socialism, collectivism, or Jews. Closer to home, “isolationists” and “left-wing papers in New York” are mentioned once, in a 10-second exchange, but Republicans and Democrats don’t make the cut, and neither do Joe McCarthy or HUAC. Let’s say you have a record of cooperating with government authorities who investigate people with left-wing views, and let’s say you work in a risk-averse industry that’s currently more nervous than usual. Yet you want to make your fierce satiric indictment of proto-fascism in America. Kazan and Schulberg went ahead, and what they got was a whole lot of Andy Griffith horsing around on camera. The parts early on may be Griffith’s best horsing around, so there’s that for art, but the movie’s idea of a fascist menace proves poorly sketched in.

Rhodes the kingmaker pushes a senator who doesn’t like Social Security and the sapping of self-reliance. In short, the fellow’s an unspoken Republican and his agenda’s that of the moneyed interests. Duping the poor to benefit the rich has been a frequent practice among politicians, perhaps especially in the boondocks (Pappy Lee O’Daniel comes to mind from Robert Caro’s Johnson books). The movie tries hard to fill in the gap between this regrettable practice and fascism. “Secretary for national morale,” Griffith says with relish, and Patricia Neal, aghast in the shadows, applies her palms to the sides of her face. A sinister cabinet title’s a start, but one expects to hear about followers being welded into a paramilitary force dedicated to the violent suppression of unwelcome opinion. The Griffith character just gloats that he has followers and that they’re dumb. The teeth do a lot of work here. In fact, I must stipulate that the scene in question, which falls late in the movie, doesn’t represent Griffith’s best horsing around, or even his so-so horsing around. It’s tiresome horsing around. Griffith succeeds at the movie’s start by being a whole lot; at the end he fails by being too much. Kazan and his smeary thumb, I suppose. (Just keep everyone yelling and eventually anything fun will go away.)

The cast. Kay Medford’s splendid as Lonesome Rhodes’ first wife; she just has a scene and a cameo, so Kazan can’t distort her. Patricia Neal plays the producer who puts Lonesome on the radio and then runs his TV show. Her cheekbones are splendid but too much, which is one sign of the Kazan effect, and she finishes the movie in a face-clenched, throat-corded way, which is another. Walter Matthau plays the demagogue’s head writer, a college man (“Vanderbilt ’44”). He’s given to wryness, ruefulness, moral reproach, and poetic instructions to the bartender (“let the vermouth blow a kiss to the gin”). Matthau’s unsuited to his role and looks like a subdued shoe. He’s the one member of the cast who flops by doing too little, not too much. In his case the Kazan effect’s been shouldered aside by the Schulberg effect. Matthau has lumber lengths of high-minded dialogue that he has to unload, plus his character’s a milquetoast liberal intellectual. Either way the actor’s stuck and only his native woodnotes wild (“lepper,” he says for leper, and “pretendwe’re not heer-yeh”) show that anything’s alive beyond a body and professionalism. Tony Franciosa escapes harm as the smart-mouth hustler who manages Lonesome’s career. In a movie of cliches hitched to would-be big ideas, he plays a cliché that’s self-sufficient. No speeches are made at him, and he makes none to others. He just hustles and he's fun.