1999 Spaceships in the Sunshine

Seeing Galaxy Quest at the AMC Union Square in December 1999. 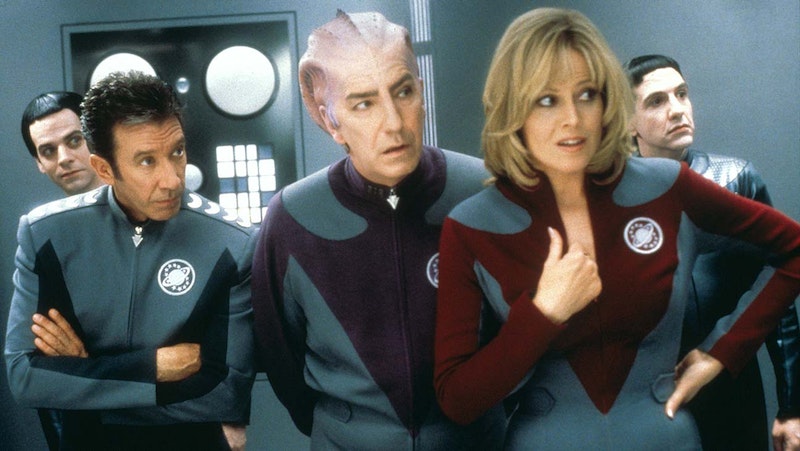 Whenever filmmakers, fans, scholars, or philistines try to narrow down the best years in cinema, the two that inevitably come up are 1939 and 1999. The former has two that make a strong case on their own: The Wizard of Oz and Gone with the Wind. But there was also Stagecoach, Young Mr. Lincoln, Drums Along the Mohawk, Only Angels Have Wings, The Women, Mr. Smith Goes to Washington, Ninotchka, Destry Rides Again, Each Dawn I Die. It might be blasphemy to compare, let alone prefer, The Matrix to John Ford, but even when that grumpy genius was dying, he denigrated his own work and would’ve yelled, not blushed, at people comparing his films to great literature, painting, or even foreign film.

But everyone knows 1999 was a great year for movies: Eyes Wide Shut, Election, Being John Malkovich, Big Daddy, But I’m a Cheerleader, Cruel Intentions, The Matrix, Austin Powers: The Spy Who Shagged Me, Fight Club, The World is Not Enough, Bicentennial Man, American Pie, American Beauty, Magnolia, Toy Story 2, The Sixth Sense… all American films, mostly Hollywood. Just like the list above. I’d argue 2019 was just as rich for American cinema, but for the last month of the year I’m going to write about seeing four movies when they came out in 1999. Looking over the release calendars, I realize now that 1999 was a transitional year, when I started going to movies more often but not every weekend, which would start the next year. While I remember posters, trailers, TV spots, and other advertising for “adult” films from after this period, my eyes were shut to most of the stuff listed above, except the obvious (James Bond and his friend Austin).

But Galaxy Quest was on my radar. Likely advertised on Cartoon Network and Nickelodeon, with trailers running before PG and PG-13 movies, I saw it opening weekend with my mom and brother at the AMC Union Square, which is still open. It was the last week of the year, in between Christmas and New Year’s, and although the movie underperformed financially, the theater I saw it in was packed. Galaxy Quest quickly gained a cult following on video which sustained itself through co-star Alan Rickman’s death in 2016—here, the cast is pictured talking about rehearsing for a sequel that was never made with the late actor. Tim Allen may have fallen from grace, but he’s still in the news, even if it’s complaining about the new gay Buzz Lightyear. But the rest of the cast—those who haven’t yet died—is remarkable, especially Sigourney Weaver and Sam Rockwell.

Allen, Weaver, Rockwell, Tony Shalhoub, and Daryl Mitchell play actors who scored big with a Star Trek style show called Galaxy Quest. Twenty years later, they’re all bitter, disappointed, jealous, petty, hopeless, and mean. All of them take on the expected poses of a dysfunctional band: Allen the ever-popular and spiteful egomaniac, Rickman the pretentious thespian, Weaver the sexualized and condescended-to token woman, Mitchell the token black guy, Shalhoub the aloof (and stoned) weirdo guru elder, and Rockwell the nervous Nelly in way over his head. When they’re all washed up at a fan convention at the end of the 20th century, a pale group of people (including Rainn Wilson) sidle up like Minions and implore Allen to advise them on a very serious interplanetary matter. Assuming this is another paid meet and greet, he goes with them in a Lincoln Town Car half in the bag, half asleep. He wakes up in space.

He makes it back down, a believer in these people and their vicious enemy, all so similar to villains they faced on Galaxy Quest. In fact, the aliens who want his help modeled their ship after his show, and talk about it as an “historical document” (just like Gilligan’s Island: “those poor people”). He convinces the rest of the group to show up, and they’re thrown into real space battles with gruesome, sudden death and grotesque monsters. Everyone makes it back to Earth okay by the end.

I don’t know what people were expecting, but $90 million against a $42 million budget sounds fine to me. The movie also didn’t recede into memory like the similar but far inferior Mystery Men, a bloated two-hour comedy full of cliches that permeated 1990s pop culture: fat asses and red meat are bad, smoking kills, and everyone still drinks whole milk. The satire of Galaxy Quest and its harsh but ultimately loving satire of fandom and obsession keep it from being locked in the year it was released. And while the movie is just as good today as it was in 1999, one thing I definitely didn’t notice about that late-December screening, a detail that would send people racing to the theater today, was how the movie changes its aspect ratio as soon as Allen goes to space for the first time.

For the first third of the movie, the aspect ratio was 1:85, the American full-screen standard since the mid-1950s. As soon as Allen is shot up in a pod, the movie stretches to 2:35 and stays there for the duration. This change isn’t preserved in any digital copies, and was the task of the theatrical projectionists during its initial run in late-1999 and early-2000. I had no idea about this trick until I re-watched the movie a couple of months ago and started reading about it again; many projectionists screwed it up and the effect was abandoned a few weeks in. That wasn’t my experience. We didn’t notice anything wrong. But we didn’t notice that we were watching 35mm (except when I counted the markers in the upper right to get a rough estimate of how much time was left).

Spike Lee’s Crooklyn also had some unorthodox projection instructions, and whenever that one gets revived, it gets screwed up. Out-of-focus shots, prints burning up: these were the things you had to worry about before digital projection. I only saw a print burn up once: a frame stalled in the last five minutes of The Last Samurai, a close-up on Tom Cruise, and burnt away. I’m pretty sure my dad and I were the only ones in the theater that night, but a few years earlier, nothing went wrong on a New York Union Square Afternoon in one of the many screening rooms I remember at the AMC Union Square.