A largely unremarkable and useless film. 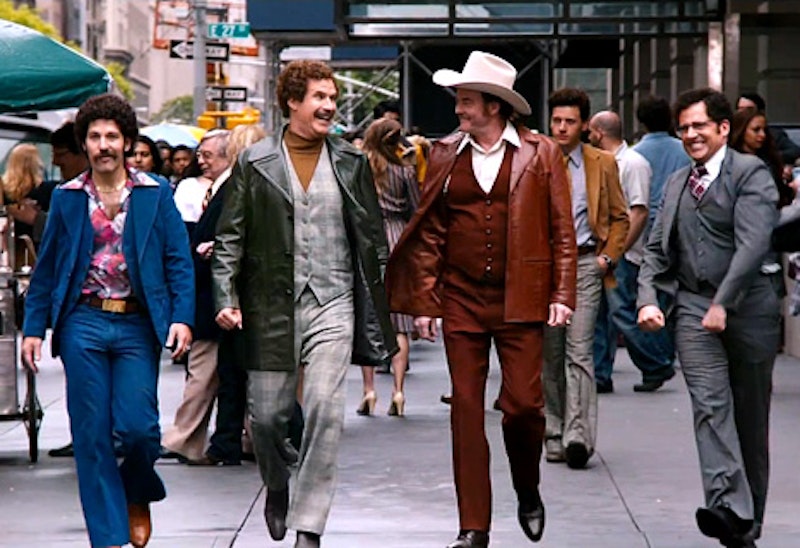 What I remember most about the first Anchorman: The Legend of Ron Burgundy was how little I laughed while actually watching the movie. I didn’t laugh during the party scene where Ron Burgundy (Will Ferrell), wearing a ridiculous robe, meets Victoria Corningstone (Christina Applegate) for the first time and declares himself "kind of a big deal." I didn’t laugh during the "Sex Panther" commotion. I didn’t laugh when Champ Kind (Dave Koechner), embracing Burgundy after a long absence, moans that he missed Burgundy's "musk." I didn’t laugh at the jazz flute sequence. I didn’t laugh during the intensely emo "Ron, were you raped?"/"I'm in a glass box of emotion" scene, or the scene preceding, where Jack Black drop-kicked Burgundy's lap dog off of a bridge. I might have tittered when the rival news teams slugged it out and while the subsequent slug-out post-mortem occurred, and I definitely guffawed some over "Tits McGee" and "Scotchy-scotchy-scotch." More significantly, I laughed, inwardly, much later—reflecting afterwards on how expansively ludicrous and Dadaist the whole enterprise seemed.

Anchorman 2: The Legend Continues evinced a higher in-progress laugh count, but this was laughter of desperation—the laughter borne of a viewer attempting to con himself into believing that he was not, in fact, wasting his time and money—and in retrospect, it's shocking how pat and unadventurous this sequel was. If I particularly enjoyed the portrayal of any one new character here, it was Dylan Baker as Freddie Shapp, the functionary responsible for bringing Burgundy, Kind, Brian Fantana (Paul Rudd), and Brick Tamland (Steve Carell) to the Global News Network a decade after the events of the original Anchorman. Goateed, fidgety, and perpetually downing Alka-Seltzer cocktails, Shapp's a bundle of nerves, always on the edge of a nervous breakdown. Who can blame the guy? He's intimately involved in the mid-wifing of 24-hour cable news, and, in a sense—perhaps unintentionally—a stand-in for the audience of this particular comedy; his stresses are our stresses, his gray hairs our gray hairs, his freakouts our ambivalences.

A runner up might be Kristin Wiig—redeeming herself for anti-acting sins in The Secret Life of Walter Mitty—as Tamland's dazed, chronic-liar beau. Together, Wiig and Carell are Chaos Theory personified, and Anchorman 2 needed much more of their manic chemistry—the spiritual equivalent of Zach Galifianakis and Melissa McCarthy's twisted courtship in The Hangover III. Wiig's non-sequitur from the end of the film is one of the few lines of dialogue that stayed with me: "I'm 22 months pregnant." The marquee regulars are more than up to the requisite inanity, even if some second-stringers receive extraordinarily short shrift (pour one out for Fred Willard, who may as well not even be in this movie). Applegate's zingers are almost worth the price of admission, with spiraling-tangent set pieces involving the dawn of cable news and confused, confusing racism not far behind; a tangent involving Tamland's fear of his own shadow, Burgundy's dinner at the home of his GNN boss's (Meagan Good) family exploding into maniacal jive bullshit, and the news crew's crude and pandering ratings accomplishments are the funniest things this movie has to offer. Greg Kinnear and Harrison Ford elevate thankless roles into something just short of sublime.

The problem is that everything I just described above accounts for maybe—maybe—half of Anchorman 2. The rest of the movie is so dull and formulaic that it threatens to nullify its better half. You'll notice that I haven't provided a full plot synopsis, mostly because a) there's way more plot and redemptive arc morality than this kind of comedy requires, and b) because the plot sucks. Would you believe me if I told you that at one point Burgundy is nursing a baby shark back to health, cradling the creature in his arms with a milk bottle in its mouth? Would you believe me if I told you that Anchorman 2 needed many, many more batshit moments like this, that more often than not the focus lay on banal, plot-advancing pablum?

In fact, that was the question that kept popping into my mind while watching this thing: "When will director/co-writer Adam McKay and Ferrell just say 'fuck it' and allow this movie to descend into total, spontaneous anarchy?" They did last time, and the result was a pop-cultural 10-megaton bomb. But a lot of Anchorman 2 tries to trace Anchorman's rhythms, and after a while, it's all just boring and dull. Yes, there is another news anchor fight, it involves some of the lamest cameos ever, never seems to end, and when it's over, Burgundy is supposed to have learned some lesson about family. The DVD edition may prove to be teeming with the improv vigor pre-release articles implied was present here, but I'm not holding my breath. For now, if anybody's looking for on-screen madness and hijinx this winter, you're better off seeing The Wolf of Wall Street, a movie I'm way more likely to quote out of context in 2014.