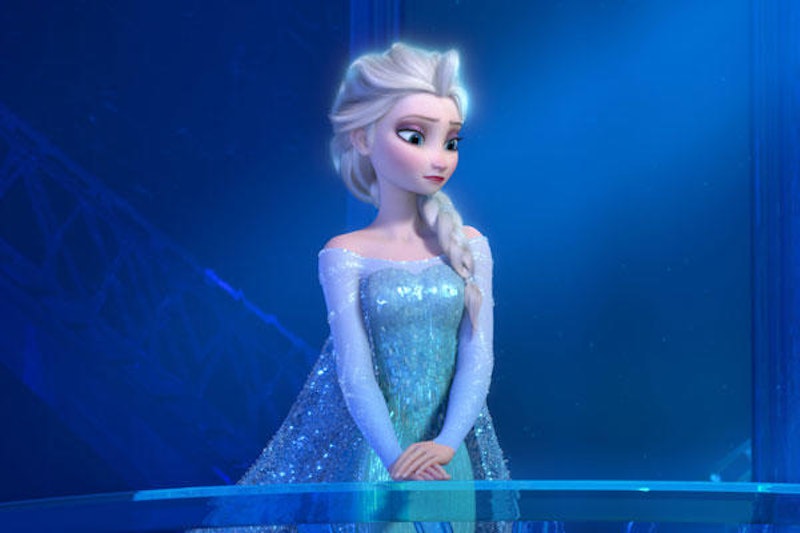 Over an appropriately arctic weekend, my son and I finally made it out to Frozen at the local multiplex. I'd been fully prepared to tune the movie out, but ultimately it had a lot in common with other children's entertainment of recent years, a color-drenched 3D spectacle of whizz-bang-pow, musical numbers that didn't feel insipid, comedy relief involving semi-mythical creatures and unnervingly self-aware animals. There was a lot to like about it, and I came away not regretting the experience. What follow are some thoughts.

Olaf the Snowman Will Totally Score His Own Spinoff Series: The diminutive, lisping snowman—who I'd become convinced was Jonah Hill, but was actually brought to life by somebody named Josh Gad—came perilously close, multiple times, to stealing the movie from everyone involved.

More Winky Intimations of Bestiality: What's up with dudes and their psychic-friend animal companions in Disney movies? Don't any of these bros have actual human guy friends?

Frozen as Fairy-Tale Analogue to The Uncanny X-Men: If you've read enough comic books, you know what mutants are: people who are born with extraordinary powers. One of Frozen's protagonists is Princess Elsa (Idina Menzel), who comes equipped with the ability to freeze things, create snowscapes, trigger wintry conditions capable of deep-freezing an entire geographical region in mid-summer, stuff like that. The normal course of arcs of this type is that mutants are supposed to learn to control and channel their gifts before becoming heroes or villains. But for reasons I won't divulge, Elsa never gets to hone her talents; she winds up growing up walled off from the rest of the world, her powers intensify, uncontrollable. As the movie unspooled, some part of me wanted to watch her evolve into some spiteful, Uber-fraulein witch just indiscriminately icing anyone and everyone who looks at her cross-eyed, but, you know, Disney.

Frozen as Plot Swiss Cheese: Okay, so Anna (Kristen Bell) couldn't see or play with her older sister, Elsa, for years, owing to a fateful accident early in their lives; I get that. But that doesn't excuse Anna's failure, over the ensuing 10 or 15 years, to make some friends, see the world. Yes, sure, these girls are princesses, but given that this is a story of kingdoms there must have been some elite circuit of princes and princesses with whom she might have mingled and kvetched to distract herself from the whole thing of her weird, mute sister who never emerged in her room, so that Anna wouldn't be so eye-rollingly naive and vulnerable at the point in time that this story takes place.

Trolls, Vindicated at Last: Trolls get a bum rap; either they're mean-mugging beasties or regrettable lawn decorations. But in Frozen, trolls are weird, Shaman-like elders who spend most of their time disguised as miniature bolders. Rave on, trolls!