Passing Strange is Good for Your Soul

The Spike Lee film keeps all the energy and spirit that made the stage show so unique. (Grade: A-) 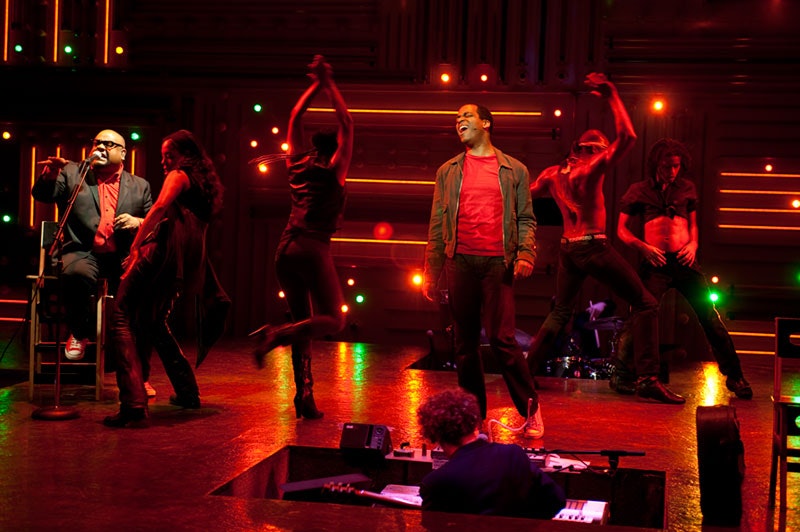 All media is marketing. We forget that sometimes, and media-savvy people can be the easiest to fool. Sophisticates think they watch Mad Men only because it's subtle and rich, or District 9 because it's a commentary on the brutality of man. Sure, I say those things. But I also try to remember Mad Men boasts a cast of really hot people, and the District 9 trailer has lots of things blowing up.

I was not enthused, then, when I first saw the poster for Passing Strange, the now-cancelled Broadway musical written and created by musician Stew (and his creative partner, Heidi Rhodewald) about his journey as a teenager from South Central to Europe and back again as a man. The original poster image is of Stew, with his guitar, amid the lights of the city, looking kind of sad, or, more generously, introspective. But let's be real, he looks sad. If you've seen the musical, this makes sense. It's very much about Stew and his existential crises.

I hate poor marketing. Why hide the fact that it also boasts a cast of really hot young people? Or that it looks, in terms of set design, bright and fresh? Why so serious? Not expecting these amusements, by the end of the first act, I was flabbergasted. It was the best thing I'd seen on Broadway since Rent. It would be a hit, I was sure. Cut to now. It's cancelled. Luckily there are at least a few rich black people willing to lend their names to good art about other black people that need to find larger audiences—say Oprah for The Color Purple, Oprah and Tyler Perry for Precious, and now Tyler Perry for For Colored Girls. Okay, it's a short list. Spike Lee swooped in to shoot Stew's musical and preserve it on film. Sundance picked it up and it is now showing at the IFC Center in New York and available for purchase OnDemand. Luckily, the movie version corrects my issues with the poster. The new marketing image rightly puts the focus back on youth and exuberance. I hope it'll do a bit better with audiences outside the city and its tourists.

Lee's version is well filmed. He must have used at least a dozen cameras, or at least it looks that way, because he manages to get some great shots from interesting angles. It manages at times to look filmic, while still feeling like the musical I saw. Of course, stage productions are always better live. Key moments, like when the set's muted background is shed halfway and a cavalcade of lights befalls the audience, simply cannot be replicated. For this reason, I'd suggest seeing Lee's version in theaters if you can.

The beauty of Passing Strange is its music and story, a story we don't hear that often but is more common than you'd think. A young Stew finds himself a black sheep in 1970s Los Angeles, a black boy with a proclivity for punk rock and a disdain for the church. He leaves for Amsterdam, then Berlin, seeking new experiences and "the real." He also leaves his mother behind, and rarely speaks to her, a decision with dire consequences. The musical explores the youth's effort to secure his identity in something, and sets up a tension between art, race and culture: is he really a Dutch hedonist, a German postmodern revolutionary, a soulful pop artist, or a ghetto black man? This is not an uncommon story; the 19th and 20th centuries have a number of expat stories of black artists and writers, from Josephine Baker to James Baldwin. Rarely do stories like this get the Broadway treatment.

But Passing Strange does not take itself too seriously. The show is peppered with jokes and slapstick, some of it pretty erudite (one punch line: "but we can make fun of avant-garde European cinema") with references to Hegel, and some of it smart but accessible (in Amsterdam, a young Stew meets a "philosophy professor and part-time sex worker"). And the music, most of it rock and roll, is fun and occasionally stirring.

Why did the musical fail? I blame the marketing first. Getting any dedicated audience on Broadway is difficult, especially for non-derivative work (not everyone can have Julie Taymor direct their crap). But the focus on Stew, who is difficult to relate to with his raspy voice and questionable looks, was also a problem. The story of an American black man in Europe, as I said before, is indeed strange. These quirks, for me, made the musical better, but isn't exactly catnip for your average tourist from Ohio.

Nevertheless, Passing Strange is worth it, an important musical and a fine film. See it. It's good for your soul.