How Noah Should Have Ended

Not happily ever after. 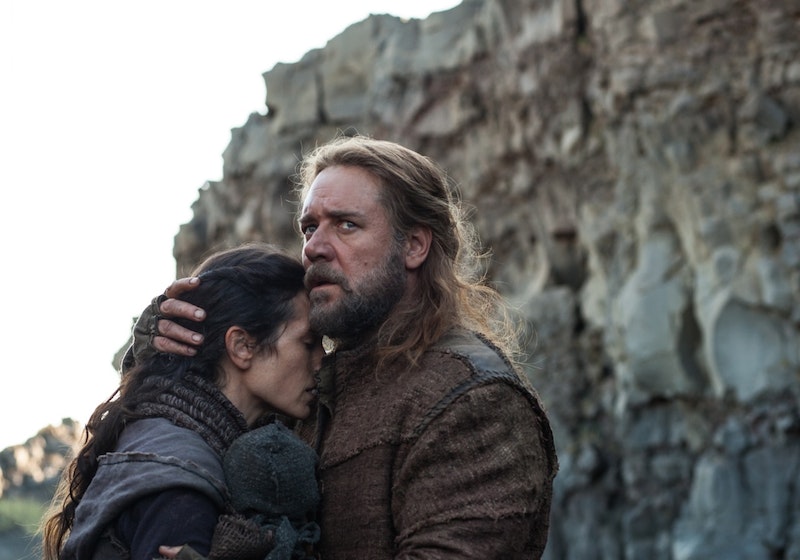 I’m a Darren Aronofsky fan-boy. One of the things I love about his movies is that he doesn’t impose happy endings on the stories—stories about hopelessness, obsession, addiction, and insanity. But he let me down with Noah.

The film has gotten a lot of criticism for stepping too far from traditional versions. On his radio show, Glenn Beck called it “pro-animal” and “anti-human.” It’s also been banned in several countries for religious reasons. But I don’t think Noah steps far enough from the traditional story.

I didn’t get invested in the movie until the environmental themes started to crop up. Fairly quickly though, Noah starts talking about the ways humans have corroded the earth, obsessed with mining zohar—a substance that has similarities to both oil and gold—and war. Through psychedelic dreams and visions, Noah’s god, who he refers to as The Creator, tells him that mankind’s great sin is a hubristic perception of nature, a view of the world that justifies animal cruelty, environmental degradation, and overpopulation. Instead of seeing themselves as products of a vast web of interconnected systems they can’t control, the humans in Noah see nature as something they can conquer and own.

When these ideas started to arise, I thought, Fuck yes, Aronofsky. Despite unequivocal evidence that an imperialistic view of nature is dangerous and unsustainable, we’re still facing an ideological battle with this topic. Many people refuse to believe that we’re irrevocably fucking up the natural world, an idea that’s reinforced by the belief that god won’t let us destroy ourselves. The need to drastically change our industrial infrastructure becomes more pressing by the day, and I can’t think of a better cultural context for a movie about humans’ parasitic tendencies. Through this environmental lens, the great deluge becomes a direct reference to the melting of the polar ice caps.

After the flood hits, Noah discovers that his adopted daughter, Ila, is pregnant with his son Shem’s child. While this seems like good news, a glimmer of hope for humanity, it doesn’t align with The Creator’s plan. The purpose of the flood is to rid the earth of humans. When they reach land, Noah and his family were supposed to live the rest of their lives without procreating, ultimately leaving the earth to the animals.

So Noah makes a decision: if the child is a girl, which would create the possibility for his other sons, Ham and Japheth, to have kids one day, he’ll kill the baby; if it’s a boy, he’ll let it live. Ila ends up having twins—both of them girls. But, when the climactic scene finally arrives and Noah is about to stab one of the babies with a large knife, he can’t go through with it.

I think Noah should have killed the babies. If he killed the twins, he and his family would’ve withered away in isolation, ultimately backing up the idea that earth would be better off without humans—the idea that makes Aronofsky's version of this ancient story so compelling. Instead, Noah has a much more happy ending. Although Ham ventures off on his own journey, the rest of the family works to reconstruct civilization. The final scene depicts Noah and his family holding hands in a circle as bursts of rainbows shoot from the sky. Yay!

Maybe I’m a cynical asshole, but this ending dulls the urgency of the film’s environmental message. If Noah and his family would’ve become the last people, this means that The Creator truly did decide that humans are a plague. Although this is an extreme statement, I think it’s exactly what we need right now—a slap in the face to shock us out of complacency. Instead, the ending of Noah reinforces the idea that, no matter how bad things get, god will save us, which is one of the barriers preventing us from collectively admitting that we need to change.