Your Library is Dying

But should you care? 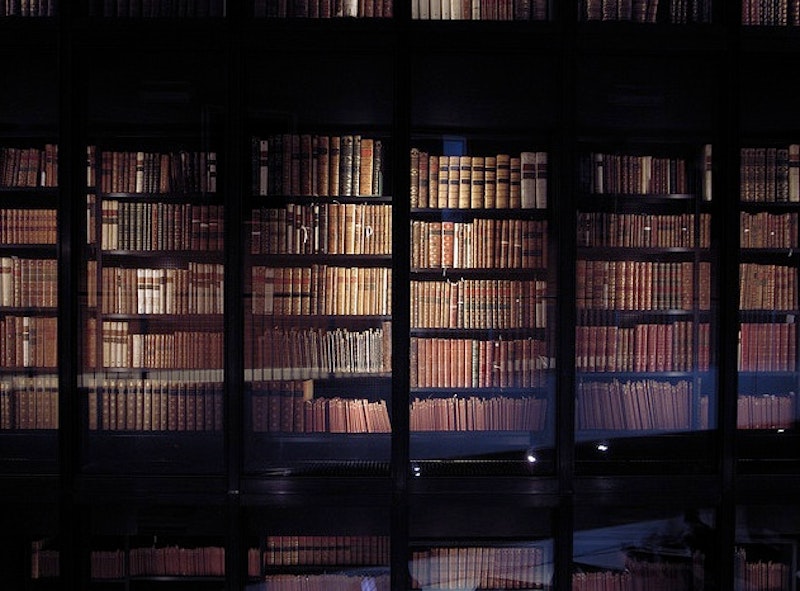 The shape of information science is changing more radically and rapidly than ever, and our libraries can’t keep up.

Everywhere, libraries are collapsing under their own weight, though this isn’t a matter of a tight budget restricting libraries from expensive information machines. Most libraries have all but done away with costly microfilm and microfiche readers and replaced them with inexpensive scanning and digital retrieval technology. Accessible technology has made it easier for a library to keep itself abreast of modern methods of information delivery. The issue with this universal accessibility to information is that this material is now available to the average library patron via their broadband Internet connections at home. There’s less and less reason to maintain a public building which functions as a locus of information when these things can be done from a Starbucks or a bedroom. As technology progresses, librarians are reduced from purveyors of organized information to glorified video store clerks. That is, for anyone who doesn’t already have Netflix.

The need for libraries still exists, however. We’re not yet a country with universal Internet access, or a country in which everyone has a computer. Even within New York’s notoriously wealthy Putnam and Westchester counties, countless people who don’t have these things stream into the local library to use what the Internet has to offer. And play Farmville. And try to sneak onto Adult Friend Finder. Endlessly. Between the retired, the unemployed, the horny, and the restless, the library remains a choice destination. Libraries have been instrumental in job searching through a difficult economy, even as they struggle through it themselves.

So, how do we return the relevance of the library to an audience larger than Luddite bibliophiles and the financially unfortunate?
I’ve worked in my local library system for over a decade. As someone who is under 30, I grew up with computer technology in my veins, but a vast majority of the library system is composed of employees and directors who are well over the age of 50. This is not to imply that the middle-aged are ignorant of computers or in any way irrelevant, but there’s definitely a distinct reluctance to evolving with technology among many older library employees. I’m familiar with shining examples of employees whose recent passages through obtaining MLS degrees left them woefully unprepared for understanding the nature of Facebook, Twitter, Wikipedia, RSS feeds or any of the other content delivery systems which now dominate the landscape of instant information.
While Wikipedia is far from a paragon of relevance or reliability, it needs to be understood. Librarians need to understand that a Kindle is different from a Nook, and how these things interact with a library. They need to know the difference between a CD and a DVD. Libraries need websites that aren’t a gallery of broken links which haven’t been updated since 2007. We need librarians who know how to use a search engine efficiently, and which search engine to use. All of these things are tools, and they’re vital to our relevance as librarians, and I’ve witnessed total ignorance of all of the above. The job of a librarian is no longer to simply find information and point the patron in a general direction. Instead, we’re now required to understand which aspects of any information source are relevant and explain this to the person seeking it. Often, the information contained within reference books over two months old has changed, and replacing these with physical materials is financially prohibitive.

There has to be other ways to compensate. Many libraries remain burdened with one-finger typists who don’t understand tabbed browsing, and who are unable to install the newest version of Flash on a public computer in order to access a current database. This wasn’t in the job description 10 years ago, but a lack of these skills is suffocating the relevance of the library system.

Most people cling to visions of card catalogues, dusty tomes crammed into dark shelves and a cold quietude when they think of the library. It’s unwelcoming, and it’s not completely unwarranted. Antiquity has its charm, but it’s damaging.

Some libraries have attempted to feign utility by doing away with the Dewey Decimal System and restructuring themselves to look like a Barnes & Noble, while others have purchased video game systems for public use. We don’t need more baubles and flashing lights—we need librarians who are more aware of the flow of information technology. Ones who don’t ask me what a “blog” is. It’s this kind of critical intellectual irresponsibility that underlies the structure of the impenetrable library system. No one sees it, but after 12 years on the inside, it’s obvious that we’ve been built on a fault line and the foundation is rotting. The ignorance is often astounding. Every so often, you hear some miraculous story about a library doing something astonishingly current, but these instances are so unexpected that they actually warrant an article.

We have everything we need to make libraries self-sustaining, but everyone seems to be missing the point as they cry poverty and budget cuts. We can make it by with less, but we need to train and retrain the library staff regularly. We need to be the tools by using these tools intelligently. I love the purity of a loaded bookshelf and big chairs to read in. This does not have to be mutually exclusive, but the fat of bad library habits needs to be trimmed before there’s nothing left.