A recent history of the derivative 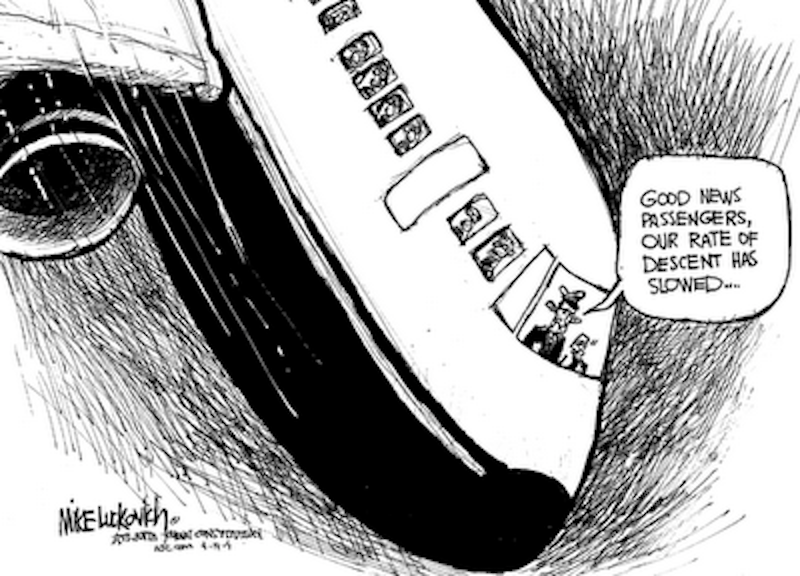 It’s not a popular subject. The mention of one results in uneasiness. The derivative no longer simply elicits grumbles reminiscent of high school and college days, but a focus on Goldman and Bear and deflated 401ks. And despite the disgust or its infamy, the derivative has fallen under an unjust and unfair scrutiny.

Consider its much-celebrated cultural prevalence despite its financial decline. The whole derivative concept surmises the educational decline with the bastardization of Web 2.0 and wraps around it the root our nations’ current financial struggles like a tortilla from a Chipotle restaurant. So in one of those weird ironic ways, the derivative got ignored but brought us back in the midst of its ugliest capabilities.

Take a look at the gripe against the American educational system. A steady decline in the performance of math and science among American youth inspired numerous academic programs—long before the ill-fated “No Child Left Behind,” maybe since the Manhattan Project or the iPod but who cares to look that up? Just settle on “It’s been a while.” Like pre-iPhone or Tivo. While the pervasive argument among the deficient American youth prevails, as those subjects are continually derided as “wicked boring,” it may be tough to argue against them. Old, ancient even, mathematicians and physicists devised a bunch of self-fulfilling rules which made their predictions work, and work they did—usually, until Einstein and that other bunch of guys from the New York Times claiming that gravity really stemmed from thermodynamic laws. The average and probably above average student probably has a hard time coming to grips with that overly contradictory set of rules. Or find math and science simply too complex to even bother with in the first place.

Yet the typical American cultural consumer has in the past few years found a new relishing of the prevalence of cultural derivatives.

A specific corner of YouTube settled into this niche. A recent post on the Boston Barstool Sports website, audaciously flips a cover of a ditty by the already musically incompetent Mike Ponser unto a flippantly cute Boston-local, not due to musical talent or creativity but her relative last-call good looks and wiry canine. Even Esquire should catch some flack for its blatant cuckoldry, with its Marie Digby endorsement about a year ago.

This cultural derivatives market takes shitty tunes, lumps them together with attractive girls with acoustic guitars and pumps them out on the Web, along with whatever whack marketing ploys and promises that fly along. This repackaging of already crappy music with less talented musicians creates a strange market for less and less sophisticated music based more on long flowing hair and intimate and candid nervous glances at the camera than a creative endeavor could. The cultural derivatives market, unlike the rejection of math and science, flourishes due to its increased repetitiveness with its variance sallied in the presentation.

The traditional variance occurred with both—the message and the presenter—along with the continued thematic complexities that would normally accompany this evolution, seem to be too much. See the Beatles. See the Rolling Stones. Rather a layering of a constant simplification and tinkering with pre-existing and simple material sets and establishes a preferred standard.

But yet again, we hate the very concept of the derivative more than ever. Right? A bunch of these uber-creative Wall Street geniuses decided that instead of researching cutting edge anti-viral vaccination programs or new urban renewal, that they would hop on the Goldman wagon and perpetuate the housing market fleecing that began around the turn of the century. (Not that they all did, but the recruiting efforts of the investment banks proved far too aggressive for the smart and debt laden (and those without debt) students proliferating our nations’ super-institutes.)

However, we fought back. Right? We now know that those complex financial utilities dragged us down and our new financial regulations will prevent that in the future, but the very phrase of the financial derivative tends to send those shivers. No?

YouTube does facilitate the creation of celebrity. Mr. Bo Burnham wheeled his early creative and entertaining exploits into an eventual (but deadening) deal with Comedy Central. Digby and Kymberlee separate themselves not as creative artists, but as derivative artists who probably will get pulled along by the marketing deluge that often hijacks too many creative lives. The promise of a quick profit turn or a prosperous livelihood can often be too much for a hungry artist or a debited broker to turn down.

When it comes to derivatives, financial or cultural, Americans appear all too willing to eat up. Kymberlee amassed over 80,000 hits in about 10 days.

Nor should the demise of the mathematical derivative serve as an argument against higher scientific or mathematical learning. In fact it should support it. Rarely do we admonish repetition; in fact, more often than not we celebrate it. See Rocky VI. However, this country does have its fair share of incredulous, auspicious, and independent academics and artists who will dare to take the student-patients in their arms and challenge them to take that next step. To create far more than they choose to replicate. As that creation is the true form of flattery, not an awe-inspired YouTube tribute. The growth from there, from the established, will give the true joy and the true truth.