And why it's a truly terrible idea. 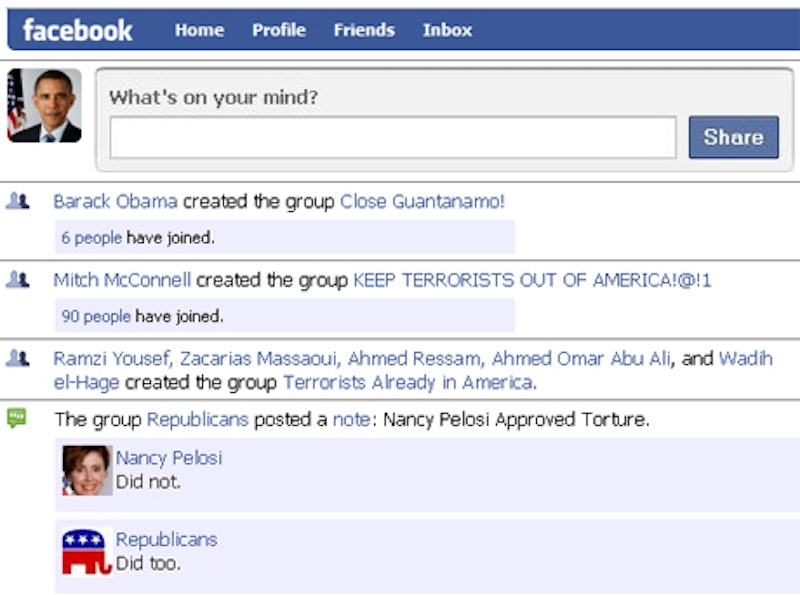 President Obama, or at least a reasonable proxy of him, has a Facebook page. It’s updated every few days, it’s apparently completely unmonitored, and it showcases a violently awful train wreck of human idiocy.

While it’s an exceptionally forward-thinking, positive endeavor to reach out to the youthful segment of these United States and present important governmental information in an easily digestible format, something has gone terribly wrong. While the official updates are simple and informative, the comments that they precipitate are an agonizing journey through intense, unmitigated stupidity. If this is some kind of experiment in the collective psyche of our plugged-in population, we’re failing miserably.

“how come u never comment back? like if there was something serious i wanted to ask would u even care? let me remind u i did vote for u.”

This is the problem with operating a public forum which is ostensibly operated by the government and used by the lowest common denominator of the population: it quickly becomes polluted with the detritus that the average Facebooked brain spits out, unaware that interacting with a facsimile of the President should command some modicum of respect and decorum. Unfortunately, the larger context of Facebook is mired in the useless and user-generated, and we forget that the average user has nothing to offer but ASCII pictures of Peter Griffin and pot leaves.

A public office cannot effectively use the tool of Facebook. If you moderate comments and cut out the idiotic, insulting or threatening ones, you’ll be accused of violating free speech. If you leave these comments to fester, they spread like an infection and reflect upon your campaign negatively. The only other option is responding to comments, which is an impracticality—especially in an office as universal as the Commander in Chief. Opening up a presidential Facebook was an altruistic, but ultimately embarrassing, mistake.

“lets bulid our economy obama yes we can fuck the republicains”

“F-CK EVERY WHITE IN AMERICA!!”

“I NEED MY FRESH MONEY DOLLARS PRINTED MONEY PRESIDENT OBAMA SO THAT YOU COJLD GET AWAY FROM YOUR BEING THE BABY BOY PRESIDENT IN US. YOU NEED TO BE THE REAL MAN, HONESTLY HONEY.”

President Obama’s Facebook page is the equivalent to an Internet riot, the weirdly un-anonymous anonymity of being on Facebook precipitating a whole mess of unrestrained, impulsive behavior. At what point does the human brain shut off and stop realizing that there are potential consequences for being a complete assbrain in the face of the Government?

We are not Government 2.0. We’ve proven that we’re not collectively bright enough to handle freedom of information and interactivity, and there are plenty of things in the government that should remain as closed systems. The recent WikiLeaks debacle, in which the website endangered the lives of countless people and the safety of our country, is a prime example of why we do not deserve complete access to radical transparency and complete interactivity. We need a strong voice of moderation, because many of us are already entitled and angry people, and when these impulses are allowed to run rampant, bad things happen. If you’re angry about this statement, it’s probably hitting fairly close to home.

“saw u on da new last nite enterin da the airforce one jet or something and gotsalute from 4 soldiers b4 leaving i was like and 1 jet that my boy love u uncle.”