Why I Love to Hate SHMUPs

The obsessive thrill of beating that final level. 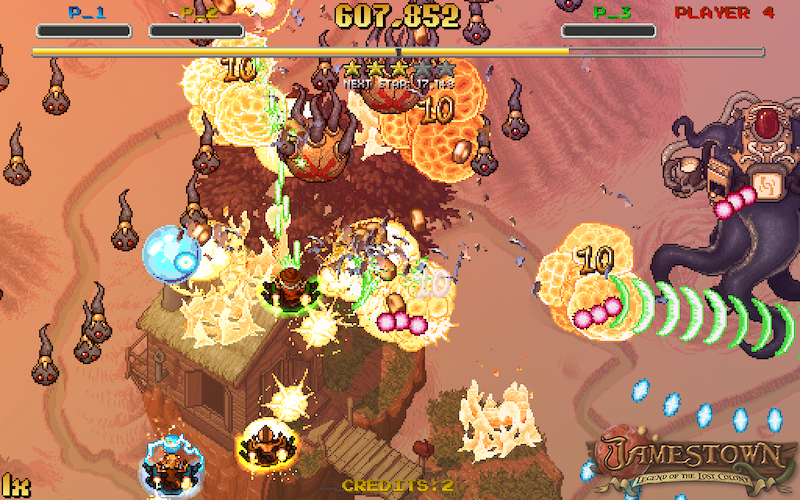 I’m writing on a borrowed computer that has a regular, working monitor. My computer’s monitor has a game controller embedded in its screen. I’ve been playing some new shooters, and after coming so close to what I thought was the end of one game, victory was snatched out from under me like a welcome mat in a Mormon basement after offering an LDS some coffee. The fury I felt at that moment probably has an appropriate German word to eloquently define the rage felt, but my ability to find words is rather short at the moment... as is my tolerance for SHMUPs.

When I say SHMUPs (SHoot ‘eM UP) I refer to games like Rez, Ikaruga, R-Type, Zero Wing, Space Invaders and Radiant Silver Gun. The game I referred to earlier was Jamestown. I just lost the game. Hard. What I hoped was the final boss was merely an aperitif for doom that would bend me over a barrel and remind me to try harder next time. My death came sudden, swift, and without flowers or a phone call the next day. My arrogance became impotence in the face of a genre of games that has, over the years, become increasingly difficult and outright refuses to hold your hand. You lose because it’s your fault for picking up the controller to play in the first place. SHMUPs are the dominatrix I always come back to again and again. Not matter how much I hurt, no matter how much I struggle, no matter how many vulgarities I’m inspired to string together... I always come back.

Until I win the game the first time I won’t Google how to do it better. SHMUPs have acquired a reputation for being hard. It’s part of their charm. Playing “hard to get” makes it that much more seductive, and makes the act of beating the game much more satisfying. Think of it like this—with most games, you get a cast of non-playable characters holding your hand either with cut-scenes or dialogue, showing you how to play, and furthermore how to beat every obstacle you come across. With SHMUPs, you die. A lot. When you get past one minor obstacle and breathe a sigh of relief, you get a new wave of them, often having to dodge on a screen that is more than 99 percent bullet. It doesn’t stop there. You think you made it to what you can assume is the Boss, and if you’re somehow able to defeat it by skill or by luck, you learn it’s only a Mini-Boss and that the stage isn’t nearly over.