Ex-Google employees are hoping that their new non-invasive search engine can challenge their old employer's domination. But what if we've actually come to rely on Google's invasiveness? 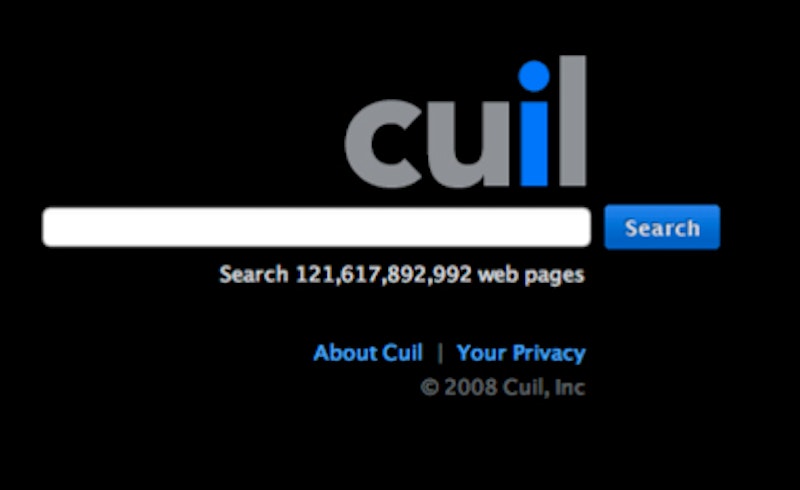 Can you write a review of a new search engine? I wondered as I stared at the main page of Cuil, the site that three Google dissidents launched on Monday. Cuil’s (pronounced “cool”; it’s Gaelic for “knowledge,” don’t you know) interface is self-consciously the anti-Google: a black background, an icy blue glow around the white search box, the “i” in Cuil the same blue to set it apart from the other dark grey letters. One assumes this is to pull in some of the market share Apple has created for the lowercase i. It’s this that made me figure, why not write a review of a search engine? This has become the decade of the i, in which technology—through iPods, social networking sites, YouTube and search engines—has fused with the ego, making it a seemingly necessary extension of the self. For the most part, futurists and science fiction writers of the last century did not imagine how easy, how minimally invasive, becoming a cyborg would be.

Still, I don’t buy in to the boring, socially conservative hysteria about the Internet making us dumber. Just the title of last month’s Atlantic cover story—“Is Google Making Us Stupid?”—was enough to make me go narcoleptic. To be charitable, Nicholas Carr’s article is actually very interesting, though the weakest parts are when he and other highly qualified, middle-aged people lament their increasing inability to read novels. Google did it, they cry: deep reading and thinking are sacrificed to the variety of information instantly available at our fingertips. Cuil, then, should make them cower in their tweeds: its primary claim to superiority is its index of 120 billion web pages, apparently three times more than Google.

I, for one, deny that Google has sapped my ability to read and think deeply. But since Carr had the self-awareness to admit that he could be a Luddite, I must admit my bias. I was the kid who read the Random House Children’s Encyclopedia from cover to cover, and I have been an information glutton ever since. Google has become a natural extension of my disposition. Growing up in a rural area, Google helped me find ideas and artists I may not have found otherwise. Since when is it a problem to know more, more quickly? Isn’t it possible that a well-made Google search could be a conduit for deep thinking? As a writer and researcher, I have found this to be true. The search engine has come to mediate our experience of the world the way books, television, and radio did before it, and though different media are not mutually exclusive (Carr loses sight of this), it’s important that we think critically about this new medium, too.

That brings us back to Cuil. How different is it? Is it any better? The differences, their website tells us, are several. One of the most important is the idea of context: rather than rank search hits by popularity, as Google does, Cuil ranks by context and relevancy. I defer to them:

For a deeper search, establishing relevancy is more than a numbers game. Cuil prefers to find all the pages with your keyword or phrase and then analyze the rest of the content on those pages. During this analysis we discover that your keywords have different meanings in different contexts. Once we’ve established the context of the pages, we’re in a much better position to help you in your search.

There you go: techy (but trying not to look it), somewhat vague, but definitely an interesting concept. Another difference is based on the first: Cuil “analyzes the Web, not its users,” meaning it does not collect user information from the result you click on. The interface also makes Cuil a sort of browser-within-a-browser. Results appear as small boxes of text, usually with a picture, rather than a hyperlinked list. Cuil helps clarify your search by showing tabs (like those in Firefox, Internet Explorer, and other browsers) related to it, allowing you to hone in on what you want. In the upper right corner, it also displays a box of categories related to your search, an aesthetically pleasing version of the “Searches related to…” feature at the bottom of some Google searches.

So how does it compare? To test, I conducted a highly unscientific, very subjective comparison between Google and Cuil. I couldn’t care less about other search engines—I haven’t used Yahoo in years, and if I can help it never use any Microsoft search engine. I first searched splice today. It was a bad start: the site is the first hit on Google, but it’s literally nowhere to be found in the first 10 pages of results on Cuil. A bit miffed, I searched something unavoidable: barack obama. The first page of results on Cuil and Google are what you would expect: official campaign website, Senate website, Wikipedia entry. Two problems immediately become apparent with Cuil, though. Since the results are displayed in little boxes of text in three columns, in what order are they supposed to be most relevant? Is the site for his California campaign the fourth most relevant to all users, or the sixth? It’s not immediately obvious, and immediacy is important in searching. There are no tabs for barack obama, and box of categories is so-so: “Illinois State Senators” and “African Americans in the United States,” sure, but “Polish-American Politicians” and “Iowa State Senators”? There is little difference between the two search engines on the first page for john mccain, either, and the categories on Cuil (except for “Mississippi Republicans”) make sense.

I next searched two terms nearer to my heart: shakespeare, and my own name. On Google, searching for Shakespeare reveals what a closed circuit Google can be: the first results are links to Google Books for Hamlet and Macbeth. On Cuil, I was pleased that the Wikipedia entry for Shakespeare was deemed less relevant than several sites I know to be really good, and the categories were actually useful: “Shakespeare Academia,” “Shakespeare on Film.” I was a bit more worried about what I would get for my own name, so I searched with quotation marks (this searches the whole phrase instead of the words individually) and without. Without quotes on Google, I don’t appear on the first page (but a YouTube video of a guy named Matt in Poland does); on Cuil, I’m actually the first page’s last result. With quotes on Google, once again I am not on the first page; on Cuil, the results are nearly identical. Because of this, the name search on Cuil seems just a little smarter, since the results tend to be for the full name, rather than just pages on which matt and poland happen to appear.

So can Cuil challenge the hegemonic power of Google? Doubtful. If Carr’s hypothesis that search engines are rewiring our brains is true, then perhaps my rewiring is Google-specific. I dig the minimal, strangely retro interface, and I even like that it follows my search history. I like the Trends page that tells me, along with other arcana, that I do most of my searches between two and three p.m. This is not to say the rebels at Cuil aren’t doing something interesting. Searching for proper names benefits from Cuil’s analysis for relevancy and context, privacy concerns are minimized, and Cuil’s simplicity—it’s a search engine, nothing else—shows how often searching on Google leads you back to content on Google. Cuil is showing, for the first time since Google came to power, that there are different ways to search the Web.

But really, the best we can hope for is that some of Cuil’s ideas make Google even smarter and better able to satisfy our voracity for information. There is always room to think differently about search engines, and Cuil’s challenge to Google is far more productive than fretting about how search engines are changing our brains. The change is underway, and it’s my hope that the search engine can continue to be a benefit to our unabashedly consumer culture, can help us become more intelligent consumers not just of objects, but also of knowledge.