The Suffering of Jobs

Let’s stop acting like Steve Jobs is either a) inhuman or b) already dead. 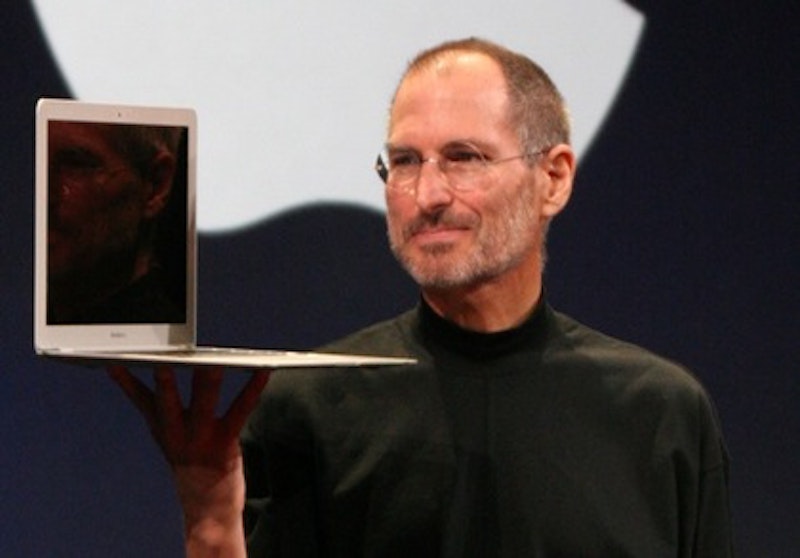 Steve Jobs has had a rough past couple of months. As the head of Apple, a mega-corporation with billions of dollars in a lot of places, intensive public scrutiny is assumed. And that scrutiny has recently focused on the man’s personal health. After assuring investors and the public at large of his path to recovery, he recently informed us he’s taking a sabbatical of sorts—and Apple stock dropped significantly.

The backlash is, in my mind, only comparable to the jokes my parents used to make about Alan Greenspan: something along the lines of if the man stooped to tie his shoe in Midtown, some stock index in the Balkans went spiraling. These men have, fairly or not, achieved a sort of demigod-like infallibility. And it’s proper to point out now that the last anyone heard of Alan Greenspan was his apology for putting too much faith in the unregulated market.

And Jobs is also, believe it or not, a man who is fallible under the very same laws of physics, biology and hubris as the rest of us. Despite this, when Bloomberg ran a premature obituary of Jobs, the collective world freaked and stocks wavered. Jobs is so important to the running of Apple that the Securities and Exchange Commission is investigating his various statements about his health.

Normally, the SEC doesn't really dig into the health of executives, and the commission normally affords executives a fair bit of privacy in matters like this. While companies do have to disclose things like how much executives make, there's no explicit requirement to disclose health information. If the SEC does uncover evidence of wrongdoing, a high-profile case like this could cause it to add new health disclosure requirements, although a move like that is fairly unlikely.

The SEC and network television anchors will huff and puff and in the end Jobs will still be on sabbatical and Apple stock won’t be going the pennies-on-the-dollar route.

Apple’s ubiquity need not be explained to anyone within earshot of the Internet, and Jobs and Apple’s influence over our burgeoning digital culture would be difficult to overstate. Let’s go back—way back—to when Jobs first introduced the Mac to the wider world in 1984:

Take five minutes out of your day for this video. Jobs looks good in a tux with what looks like an asparagus-colored bowtie. The classic retelling is as such:

Pandemonium reigns as the demo completes. Steve has the biggest smile I've ever seen on his face, obviously holding back tears as he is overwhelmed by the moment. The ovation continues for at least five minutes before he quiets the crowd down.

The tech pub Technologizer put together a good overview of Jobs’ keynote addresses at the annual Macworld Expo. You can skip to the highlights and conveniently observe just how…obvious and easy the man makes it all look. To only go back to 2007 and watch Jobs unveil the iPhone—no matter if you’re a Mac person or not—is to witness a little substance to the cliché, “history in the making.” But what strikes me is the simplicity of the medium: standing on a stage with a microphone and a few slides, the teacher and the students.

And it is that vein of disseminating complex topics through a bare-bones lecture that I believe fuels the now rampant interest and consumption of Technology, Entertainment, Design speeches—better known as TED talks. A column in The New York Times Magazine by the reliable Virginia Heffernan on TED talks delves into this—wait for it—trend (The New York Times, ever on the hunt for a trend—trend!—recently ran pieces on ridiculous bacon recipes and a self-help blog for women who are dating bankers):

Once you start watching TED talks, ordinary life falls away. The corridor from Silicon Alley to Valley seems to crackle, and a new in-crowd emerges: the one that loves Linux, organic produce, behavioral economics, transhistorical theories and “An Inconvenient Truth.” Even though there are certain TED poses that I don’t warm to — the dour atheist, the environmental scold — the crowd as a whole glows with charisma. I love their greed for hope, their confidence in ingenuity, their organized but goofy ways of talking and thinking.

Steve Jobs didn’t create the medium of the lecture. But his storied tenure at Apple has myriad ramifications on the way we observe and consume the arc of technological and digital culture. The man is still around; he’s already beaten pancreatic cancer; and probably has a few more game changers in that brown bag of his.