The Specter of Windows 8 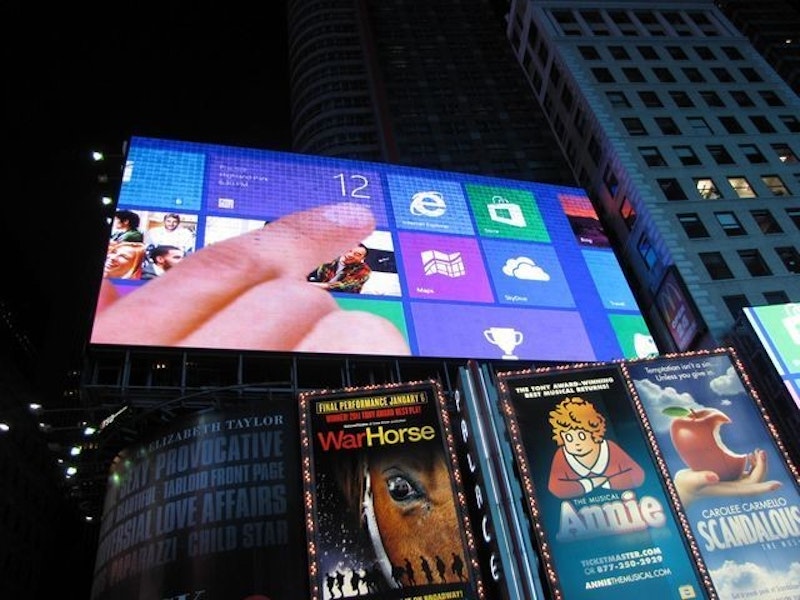 At the end of the demented George Saunders story "Brad Carrigan, American," the title character is transformed into a featureless, gray blob of protoplasm. Logging onto a Windows 8-equipped laptop, the reverse is almost true: the user is greeted by a rainbow spectrum of square and rectangular blobs hovering in digital space, flickering, scrolling bits white text and thumbnail images. They have striking, direct names like Money, Sports, Bing, Games, Photos. If you've got spare time to burn, it's strangely soothing, almost hypnotic, to watch those shapes and information bob there meaninglessly: unlike the Saunders yarn, Microsoft's oblivion-via-media-dissolve is kinda... welcoming. It's all fun and games until you have to get into the guts of the machine and do actual work—log on via the company's VPN, write a freelance article, maybe do some research—and you have to try to circumnavigate all those bobbing blobs. Clicking one submerges you into a screen-drown of whatever color the blob was, with attendant logons or search functions or whatever, plus backing out or jumping from one application is hardly intuitive.

Maybe I'm just too old. I mean, if I was a 15-year-old lounging around on Christmas morning figuring this shit out on a tablet, there might be an air of adventure or discovery about Windows 8, the rush of pioneer spirit that the pre-launch commercials for this operating system seemed to encourage. Like most adults, though, I'm trying to accomplish stuff, and have no desire to explore. Is it a relief that my Toshiba has a pre-Windows 8 setting that I can use? Certainly, it is, but the creepy thing is that while I'm working in that pre-Windows 8 setting, Windows 8 is waggling its fat, paint-splattered fingers in my field of vision by occasionally and randomly erupting Windows 8 applications that temporarily blot out whatever I'm trying to get done, derailing trains of thought, disrupting important Live Meetings, and generally putting across the impression that a low-grade Artificial Intelligence is ramping up a campaign of minor operating-system terror. As a whole, the experience is a claustrophobic one where Control-Alt-Delete becomes your best friend, even as you worry that you're in danger of overusing those keys and sidestepping the onward march of technological progress, at your peril. Succumb? No way, not me. Well, probably not.