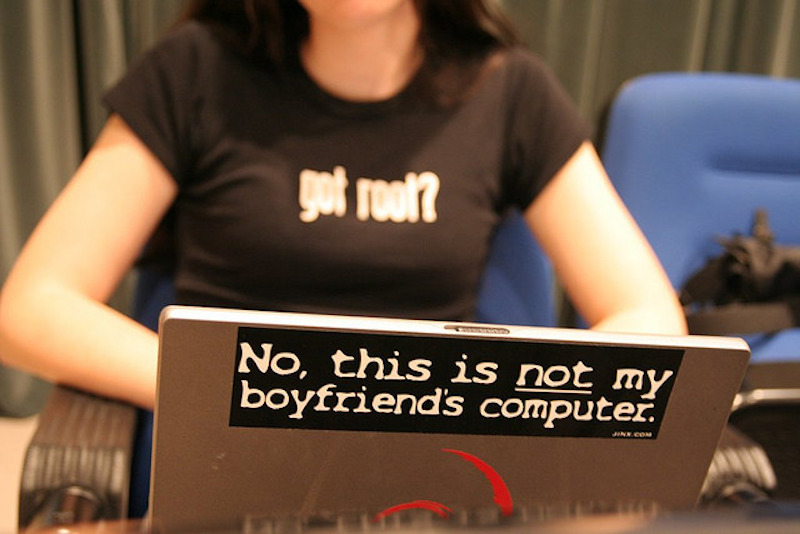 Daily deals aggregator Sqoot's recent sexist advertisement and resulting fallout has called attention once again to the "boys club" atmosphere often associated with the tech industry. As was widely covered, marketing for the planned API Jam in Boston included an offensive joke describing one of the "great perks" of the event was "women," then explaining that the female staff would be serving drinks. While the offense may have been common and a symptom of relaxed attitudes—not only in the tech industry but to greatly varying extents every other known industry—towards jokes made at the expense of underrepresented groups, the response was encouraging.

In addition to the ensuing negative press and public backlash, several sponsors pulled out of promoting the event, likely endangering its chances of taking place at all. Many women have written of their experiences with the pervasive casual and aggressive gender discrimination and bias in various technology-centered fields. Unfortunately, these accounts are too often shrugged off or countered with anecdotal examples of influential female programmers who succeeded.

But this time the anger has resonated with great numbers of men and women reporting on or involved with the tech industry. The disgust has been widespread with seemingly fewer supporters of the small startup's actions. Many have even called attention to similar instances that received much less attention.

Terms like "brogrammer" address the perceived increase of classically masculine attitudes among a growing number of programmers specifically but also often applied to those working in related fields long stereotyped as being havens for those who don't conform to many traditional social norms. Like many media buzz-terms it's greatly simplified and not fully reflective of the range of macho behavior that flourishes in a variety of male-dominated fields, its use and appeal is understandable. It's this sort of hyper-masculinity that makes a company like Sqoot think that sort of content would be well-received by the intended audience.

A portion of this audience was neutral or even enjoyed its inclusion, but the response was one of overwhelming rejection. Though incidents like the API Jam ad are deeply upsetting to those with personal experience of being undervalued in any industry based on gender, the response has established an important precedent. The direct repercussions send a message that these attitudes are inappropriate and not welcome, even if they've so often been ignored before.

In addition to the sheer numerical dominance of males in technological jobs, deeply imbedded social myths about the "natural" superiority of men encourage the devaluation of women. From the time they take their first math or science class, children are frequently subjected to reduced expectations for females to succeed. There are exceptions and efforts to correct this misconception, but it's something that continues to be observed in all different educational environments. These messages carry on into the professional world. It's not specific to technology either, but a number of occupations erroneously thought by many to involve tasks and thought processes better performed by men, such as medicine, engineering, or maintenance and repair work. It gives many men an additional justification to exclude women, whether their efforts are subtle or blatant, unknowingly or on purpose. But these attitudes are changing as the actions of the exiting sponsors reflect growing appreciation for diversity and representation and a desire to protect the advances made in inclusiveness.