Spotify and Our Degraded Music Culture

What exactly does another free music service add? 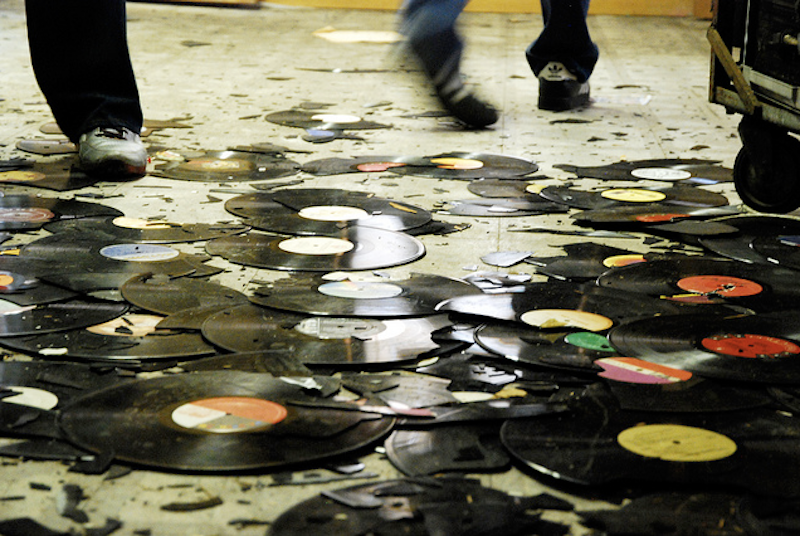 Spotify, a free streaming music service from Sweden that’s already hugely popular abroad, launched in the U.S. last week, taking a cue from Google and letting invites to the service drip out while word of mouth and good will built. Go on Twitter or any message board and you’re bound to find someone giving away invites—I got mine from Billy Corgan, who’s already crowned Spotify as “the future of music,” his favorite over-used superlative. But there’s no doubt it’s here to stay—for now.

Spotify takes bits and pieces from ancestors like Napster, iTunes, and Rhapsody, but the result is much more appealing: free streaming of entire songs/albums/discographies, with occasional commercial interruptions between songs. You can listen to a song five full times before having to pay for it, and a premium account without the ads and unlimited streaming ability is only five bucks a month. I downloaded the program out of curiosity and was surprised not only at its simplicity, but also the vast catalogue. I’ve been trying to find a copy of Van Dyke Parks’ 1976 calypso record The Clang of the Yankee Reaper online for about a year, and Spotify had it (Wye Oak, too—no Jim O’Rourke though). On the user end, there really isn’t much to complain about; Spotify allows me to listen to an album I may have just read a review of, and without clogging my hard-drive or blindly buying the thing, I can see if it’s any good. If I want to listen to “Purple Rain” or show someone a song, I can, and quickly.

What I want to know is how is this sustainable for Spotify? The Swedish developers have stressed that keeping the program free, or somewhat free, is crucial—bully for them, but who will be compensated and how? Spotify makes its money through ads and premium accounts, but how far can five dollars a month go? The developers will do fine, but what about the artists? Record labels? They hardly get any money under iTunes, and Apple sells records for 10 bucks a pop. Spotify’s emphasis on music association rather than music ownership is troubling as well, especially at a time in our culture when music is becoming more and more marginalized. Songs and albums aren’t things you own anymore, physical objects that you make a connection with simply through their existence—songs are like stickers, something posted on your Facebook that peels away by the next day.

People don’t look to popular music any more for emotional support or companionship; it’s not only purely escape, it’s delusional. The more and more we make music and art abstract and throw them into “the cloud,” the less we connect and find real value in it. The very physical existence of a CD, or a record, or a tape, forces us to relate to it, to interact with it. It’s like the volleyball Wilson in Cast Away: it’s a lifeless object, but humans can’t help giving things personalities. Remember the scene in The Catcher in the Rye when Holden drops and shatters the 78 he was going to give to his sister? He’s heartbroken, not because he’s out a couple of bucks, but because he watched this piece of music die.

Music deserves more than just being another node in the information cloud, something we casually check out after our email and notifications. On its own, Spotify is a great, though perhaps unsustainable service. But what it could mean for popular music culture is terrifying.