Ride the Unicorn, Bomb the Tanks 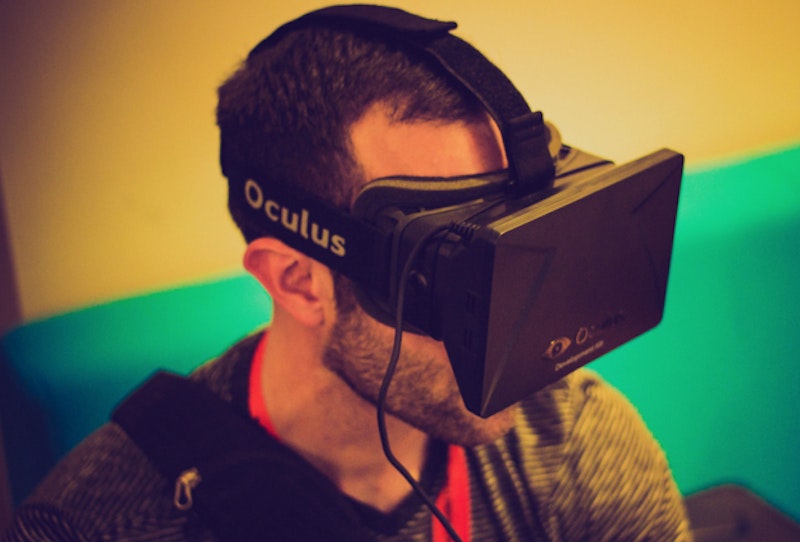 “This is going to change the world in profound ways,” I explain to the salesman hawking exercise bicycles with Virtual Reality headsets. “People are no longer going to feel the need to jump out of airplanes, or even the Freedom Tower and George Washington Bridge!” I exclaim. “They can just do it in a virtual world.”

“Uh huh,” says the salesman, tilting his head while he looks at me like a mentally-challenged dog I just offered a treat too. “It’s also going to change going to work, playing, and how we even relate to one another, and it’s happening this year!” The guy nods his head, still sort of tilted. “Look,” I explain, “people will no longer have to meet in conference rooms and go over pie charts, sales pitches or the color of their underwear. They can now just all go online and show up in a virtual conference room looking like anyone they want. Donald Duck to Donald Trump. They can have three heads, four heads, or no heads. Same with arms and legs. And they can fly if they want to.”

This confuses the salesman to the point where he looks like he is going to cry, so I break it down for him one last time. “People will no longer Skype, they’ll talk in person wherever they want, based in reality or pure fantasy. Friends can hang with friends without ever leaving their rooms while playing the most realistic video games ever. People can even have a virtual Tinder account and pick up real people who decide what they want to look like. The whole world is going to change. Laws are going to have to be created. This is wild and we’re at the start of it.”

The salesman looks over at my wife who’s pedaling furiously on a rickety exercise bike. I figure it’s no use telling him that there will be virtual lawyers who decide what is and isn’t appropriate “at work,” and if sex offenses carry any real weight. Oh, and then there’s the virtual courts, prisons, and executions. I’d love to see some scumbag get the guillotine in the town square while old ladies knit away and scream, “Kill the fucking one percent!”

I stop myself and pay attention to what is happening before my eyes, in the real world. “I don’t want to pedal any faster,” yells Elena at me as she wears the Virtual Reality (VR) goggles. ”If I do, I’ll make the unicorn fly again then I’ll fall off.” I understand completely what she’s talking about and tell her to take a few deep breaths, enjoy the English countryside, and just marvel at the beauty of the unicorn’s horn. Elena stops pedaling the exercise bike and turns her head from left to right with lots of oohs and aahs. The salesman tells us that he gets that a lot as Elena tries to look behind her and almost falls off the bike.

“We gotta work that one out,” explains the VR software creator. “It’s a whole world,” yells Elena, because she’s also wearing headphones along with the HTC’s Vive Headset. “I’m riding a unicorn!” The salesman and I talk about why women love to ride horses, or, in this case, unicorns. It’s a big, powerful living being between their legs and makes them feel oh so good. “I heard that,” yells my wife, as she pedals slowly enough as not to go flying high above the countryside once again.

I tell her to check out the racecar VR race and the one where you drive a tank over rolling hills to blow the hell out of other tanks. You can actually feel your stomach drop as the tank lurches back and forth, then up and down. Elena tells us that she’s had enough, thank you.

We get the guy’s business card, and continue to walk the luxury electronics show at the Manhattan Pavilion. As we do, we talk about how far VR has come since a few months ago when we wore similar VR headsets but with iPhones inside of them. In fact, we were so impressed from that event that we purchased some Google VR goggles, and I spent the next two days finding all the streaming VR online I could. I also ordered a set like the ones we wore from Amazon for less than 40 bucks. Of course, they were made in China.

It turns out there’s an app you can download for free for your iPhone or Android called “BadOink.” It lets you stream enough VR porn to wet your lips or get a hard-on before it asks for real money. The whole thing is freaky. First, when using a cellphone VR Device, the picture isn’t that clear and it feels like you’re looking through binoculars. But once you get used to that, things really begin to change. You can look up or down or spin around and see an entire world, either real or computer-generated. Sometimes you can’t tell the difference.

And watching people have sex in front of you is like being the uninvited third wheel at your friend's home. Of course I love seeing the naked female body in all its glory, and some male ones, too. But when they swing their huge dicks in my direction, it’s duck and cover time. I can’t wait until they make POV movies, where you get the facial.

But I’m getting ahead of myself. The really good stuff won’t happen for, oh, six months. Then we’re off to the races and it’ll be a whole new world. Not just a virtual one. Although I suspect someone is going to invent virtual cellphones so people can still text one another from those nether worlds. Then maybe real estate prices will go down and the world will become safer because now every Millennial can indeed “live” in Brooklyn.

I’ll no longer have to trip over hipsters and their beards when they stop on the sidewalk or in traffic to answer a text. And if I do? They can suck my virtual Ding-Dong. And believe me, as Bernie Sanders says, it’s going to be huge!