Both Resident Evil and Left4Dead 2 feel especially relevant in the wake of Covid. 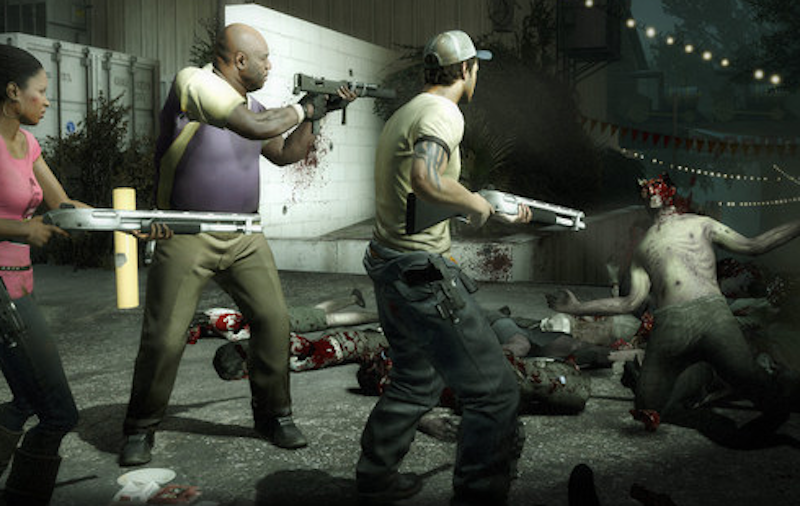 I’ve finished a few games from my list, including the Resident Evil Remake. The game is a masterclass of classic survival horror game design, and still holds up. I also revisited Left4Dead 2 after its spiritual successor Back4Blood failed to live up to the hype. Doing so made me appreciate Valve’s meticulous attention to detail in its visuals, audio design and game mechanics. The game’s polished to a degree that mid-aughts Valve was known for, shortly before their long dormancy until Gabe Newell’s fancy was tickled by the prospect of VR with Half-Life Alyx. But both Resident Evil and Left4Dead 2 feel especially relevant in the wake of Covid.

Resident Evil is far more grounded in scale and scope. The level design is full of cramped, claustrophobic corridors that’re populated by shambling cadavers. Even one of those is going to give you a run for your money due to the tank controls. Left4Dead 2, by contrast, focuses more on its power fantasy. Grab a gun and light the Infected up with your pals, you’ll go through waves of them in a single playthrough.

Mechanically, Left4Dead 2 relies on cooperation. Stay together to survive; reckless behavior makes you an easy target for the Special Infected. In Resident Evil, you’ll run into other characters but never stay with them for very long. Later entries go towards action, even trying the co-op route themselves with Resident Evil 5. But Resident Evil 7 takes the series back to its survival horror roots, eschewing the action movie set pieces and camp for something that’s more in touch with the original game’s sensibilities.

But what caught my eye was how these games handled their respective outbreaks. Resident Evil’s mansion is the prelude of a far deadlier outbreak in Resident Evil 2 and 3. There’s a clearer chain of events traced from Umbrella Corporation’s mutagenic machinations. In Left4Dead 2, information is more scattered and speculative, less certain of the virus’s origins. You’ll read graffiti from other survivors that sows doubt and reveals conspiratorial thoughts due to institutional distrust.

Surprisingly, it’s Resident Evil that takes aim at capitalism. The military-industrial complex found value in Umbrella’s bioweapons. The higher-ups at the company backstab each other to steal research and demonstrate no care for the well-being of others, more motivated by ego and intentionally sabotaging competition. Most jarring in a world of rampant corporate malfeasance, Umbrella receiving actual consequences for their actions feels like a more optimistic outcome than we’re willing to believe.

That is, until other bioweapon manufacturers get in on the game and remaining actors immediately talk about restoring Umbrella. As if they didn’t personally cause a massive loss of human life that should never be repeated. The zombie-generating machine must turn back on once again. There’s the hubris of “We’ll get it right this time.”

Testing isn’t as common now, maybe you’ll find a kit at Walmart. The push for going back to in-person learning, the pitiful stimulus checks, the refusal to permanently alter our society aren’t tinged with Left4Dead 2’s incompetence. What we’re seeing is the deliberate decisions that a company like Umbrella would make. Despite Left4Dead 2’s understanding of survivor-level panic and frustration, Resident Evil is more willing to state the obvious: the villain was always capitalism.